The rising risk in trade row

It’s hard to remember a time in the past few years when geopolitical risks were so pervasive in markets.

The potential for a “no-deal” Brexit come 31 October in the UK, upheaval in Hong Kong and lingering tensions in the Middle East.

To us, the biggest issue for markets and the global economy remains US/China trade relations. At the beginning of August, President Trump announced a 10 per cent tariff on the remaining $US300 billion of Chinese imports to the US, the implementation to come in two parts, 1 September and mid-December .

Chinese authorities first responded by allowing the Renminbi to depreciate – USD/CNY rising above the USD/CNY7 level previously defended – and by also instructing State-owned Enterprises, or SoEs, to halt purchases of US agricultural goods. This was followed by the announcement of new Chinese tariffs on US imports late in the month.

Unsurprising, President Trump quickly retaliated, labelling China a “currency manipulator” and subsequently increasing the 10 per cent tariff noted above to 15 per cent, and the existing 25 per cent tariff to 30 per cent (from 1 October).

The significance of the latest tariffs imposed by the US is not the rates chosen, that they might increase again or indeed the breadth of the tariffs.

Instead, the prime issue is that the repeated escalation of tensions points to open-ended conflict. The only thing markets like less than a surprise is the prospect of a period of prolonged uncertainty.

In terms of the economic impact, the Reserve Bank of Australia has made clear they are becoming more concerned over global developments, repeatedly highlighting the negative impact the US/China trade and technology disputes are having on business confidence globally. 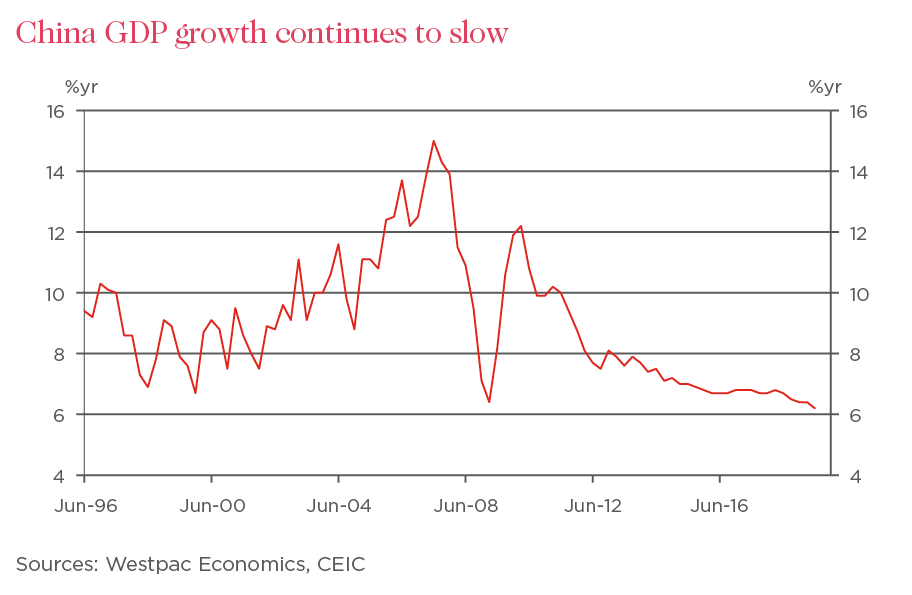 The impact on China’s economy is particularly important for Australia, given they are  our largest trading partner, demanding iron ore and coal, as well as service exports like education and tourism, in scale.

Up until now, the trade tensions have been manageable for China. While manufacturing activity has contracted through 2019, GDP has continued to run within authorities’ 6-6.5 per cent target.

However, if the latest escalation is sustained, then the capacity of China’s economy to grow at or above 6 per cent will be challenged into 2020.

For Chinese manufacturers, waiting out the drama is increasingly not an option. As a result, production and investment will weaken further as factories are moved to other nations. These dynamics also point to deteriorating prospects for employment and wages growth which, much like investment, are looking worse for wear.

Sentiment is also clearly at risk, accentuating the income shock’s effect on households’ propensity to consume. Note also that many households have taken on debt to invest in housing during the past 18 months as authorities supported the economy by increasing the availability of credit. Amongst these new borrowers, the greater the uncertainty that ensues, the stronger the disposition to saving will become. This is also true of would-be first-time buyers who, given materially higher house prices, now have to save a larger deposit.

While a weaker Renminbi will aid China’s import-competing firms and the government continues to champion local industry, Chinese businesses will still be affected. In addition, investment by SoE’s and local governments is yet to gain meaningful traction amid a greater focus on return on investment – instilled by the structural reforms of 2017 and 2018.

All of that said, there’s reasons to justify ongoing belief in China’s long-term growth capacity.

Looking to 2021 and beyond, China’s burgeoning political and economic relationships with its neighbours, its capacity to re-invent industry (as the steel sector is testament to), and its pursuit of technological progress all point to strong growth opportunities ahead for both activity and national income.

To achieve this transition, authorities will need to continue incentivising the breaking down of structural impediments to growth – most notably the availability of capital to private enterprise and opportunities for households to build and preserve wealth – while eschewing a quick fix for growth through a debt-fuelled, “growth at any cost” infrastructure drive as in the past.

But for the time being, markets should remain buckled up for what could be a bumpy ride.