The last time the iron ore price hovered around the lofty $US120 a tonne mark, Australia’s “mining boom” was well entrenched in the nation’s psyche.

It was early 2014 and a decade of strong demand from China had not only helped Australia avoid the worst of the global financial crisis but spurred global headlines about mining workers in their 20s earning $200,000 a year and Perth having the most pricey coffee in the land.

Five years on, so-called “mining boom 2.0” is proving very different for the nation as the ensuing 2015-17 commodity price slump remains fresh in miners’ and consumers’ minds.

“It feels that there is much more trepidation in spending and seems to be less disposable income,” says Nathan Nisbet, part-owner and co-founder of Rodney's Bait 'n Tackle, a bar in Perth’s Mosman Park. “(Business) costs are very high, and if you walked into Rodney’s on any given day you would think that we are rolling in cash due to so many punters, but we aren’t.”

Since bottoming out around $US38 a tonne in late 2015, iron ore – Australia’s biggest export earner – has gradually recovered, notably so this year as supply constraints from Brazil and healthy demand from China boosted the key steelmaking ingredient around 70 per cent to $US120 a tonne by the end of last month. Although the price has dived this month, a casualty to the flare up in the US-China trade war, new ABS data points to the gains that have already flowed to miners – and thus government coffers.

In fact, Westpac senior economist Andrew Hanlan says the record monthly trade surplus in June, driven by stronger exports and a pull-back in imports, suggests the country will record its first current account surplus since 1975 in the June quarter, good news for GDP growth and breaking decades of being reliant on the rest of the world for capital.

But in contrast to the pre-and-post-GFC mining boom’s euphoria, “capital discipline” and returns have become core to the industry’s zeitgeist in recent years. Western Australia, Northern Territory and Queensland – highly leveraged to the mining cycle – have gone from driving the nation’s growth during the “two speed economy” to among the nation’s weakest state economies, recessions and double-digit house price declines continuing to weigh on people’s minds.

Concerned about muted inflation and slack in the labour market, the Reserve Bank in recent months cut the cash rate to a record low 1 per cent – it was 4.75 per cent at the height of the mining boom in 2011.

Yet rate cuts – along with a stabilising housing market, tax relief and the completion of the election – don’t yet seem to be having the same economic punch as in the past with the Westpac Melbourne Institute Index of Consumer Sentiment last month falling to a “troubling” two-year low to levels well below the prior mining boom.

So, why are we down in the dumps when our biggest exports are on a tear?

Tom Kennedy, an economist at JPMorgan, says while the terms of trade – the nation’s export prices relative to import prices – is just below the 2011 all-time peak thanks to strong iron ore and coal prices, the boom is likely to be “less fun the second time around”. 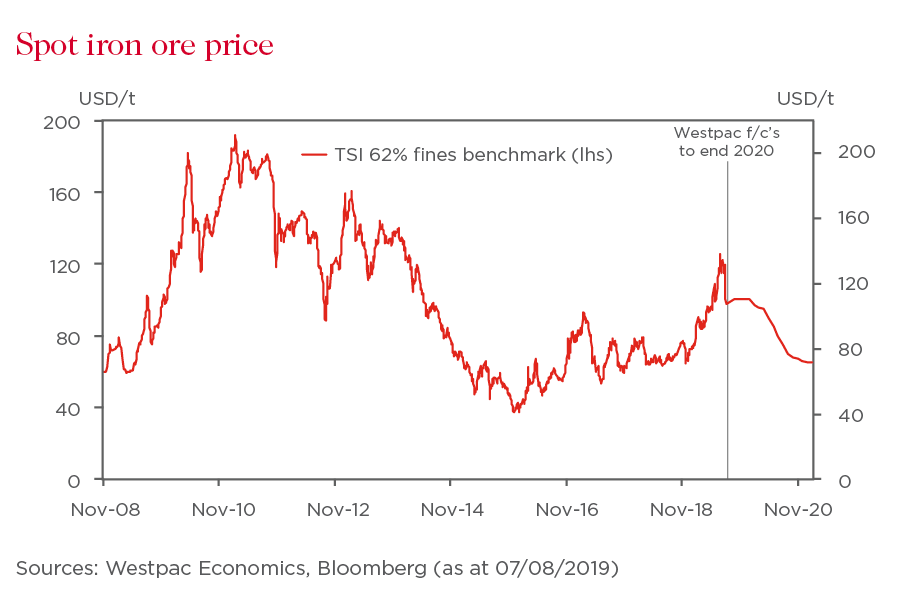 “The benefits, both direct and indirect, have been materially smaller in the most recent episode,” he says.

“Our focus is clear and that’s to maximise cash flow, maintain capital discipline and increase value and returns,” Andrew Mackenzie, the chief of BHP Billiton, the world’s biggest miner, told a major industry conference in May.

Also, Kennedy says the economy is benefiting less from the higher terms of trade because unlike in the 2000s when a tight labour market resulted in real wage increases, that wasn’t happening and a bigger slice of the income gains was flowing to company owners, including foreigners after buying up assets over the past years. In research into what the iron ore price rally means for the economy, published last week, the RBA added that the “boost to incomes is likely to increase GDP growth only a little”.

“The benefits from the most recent terms of trade upswing have accrued mostly to firms,” Kennedy says. “Dwindling mining capex compounds the issue since the income gains delivered to mining firms are no longer redeployed domestically into investment and hiring, but instead sent offshore in the form of repatriated earnings.”

Limited flow-on to pay packets may not surprise many workers adjusting to an evolving labour market.

Wages are growing around 2.3 per cent, down from 2.6 per cent in early 2014 and around 4 per cent in early 2011, according to the ABS’s wage price index. Last month, the annual Household, Income and Labour Dynamics in Australia (HILDA) survey revealed median “real” – after inflation – annual household disposable incomes went backwards from 2013 to 2017, falling $113 to $80,095.

Adding it all up, Kennedy says most of the kick to the broader economy from the lift in the terms of trade will come through the “fiscal channel” this time around, or how governments choose to use the spoils of higher mining tax receipts.

But with the government sticking to its ambition for a budget surplus in 2019-20 and several domestic uncertainties hanging over the economy, not to mention global risks from the trade war and Brexit, analysts expect the Treasurer to keep options open and ammunition up his sleeve. Several forecasters, including Westpac Economics, also predict this year’s iron ore price revival to run out of steam, potentially at a time when the RBA is running out of its own ammunition to prop up the economy.

“In our view the fiscal policy path is what is most important for the macro outlook,” Morgan Stanley equity strategists say. “(But) the government's commitment to a FY20 return to surplus limits the space for near-term stimulus, although…we expect the government to bring forward Stage 2 of its tax plan to financial year 2021.”

To be sure, the commodity price upswing has already delivered several benefits.

Gains by listed mining companies helped pushed the sharemarket to record highs last month, boosting superannuation fund returns and direct dividend payments. Westpac Economics analysis also shows the mining sector was a key net job creator in the year to February as labour constraints gradually return. Overall, the national jobless rate of 5.2 per cent, is below the 6 per cent level in 2014 when the iron ore price last hovered around $US120 a tonne.

“Miners are responding to higher prices, albeit modestly, leading to an emerging turnaround in mining investment following six years of decline. For governments, tax collections are receiving a boost, with the potential to fund additional expenditures.

“(But) despite the strength in national income, wages growth remains stubbornly weak – mirroring a global dynamic.”

In Perth, Nisbet from Rodney's bar says he’s noticed a pickup in trade and sentiment in the last four months but “nothing to write home about” and many businesses still appeared to be struggling amid the ongoing sluggish WA economy.

“I have heard that other businesses are doing it tough. These days the sign of a successful business is almost just staying open,” he says.