Australia’s economy has had a great run.

The last time Australia had a recession in the early 1990s, Terminator 2 was the top grossing movie, Bryan Adams had the top charting single, and Australia’s most popular TV personality was Steve Vizard.

At the same time, the global economy has also slowed. Slower global trade is expected to continue for some time with the potential impact of an escalating trade war between the US and China, and wildcards like Brexit.

But looking through these concerning risks, the underlying drivers of demand in the Australian economy remain sound.

Our population growth is well above most developed markets. State and Federal infrastructure spending commitments are large. Our relatively low dollar should continue to support export earnings, and historically low interest rates should stimulate consumer spending. The Morrison Government’s recent tax cuts should also provide significant stimulus to the economy.

That’s all good. But it could be a lot better.

There is no simple answer to drive Australia’s growth rate back towards its potential, other than the observation that all of us – governments, regulators, the financial sector, and businesses themselves – need to work together to rekindle confidence and fire up the ambition of business leaders to invest in the growth opportunities of the next decade.

Recently this collaboration has not been as strong as it needs to be.

The political dynamics within and between the major parties has made genuine policy reform difficult. The cases of inexcusable behaviour by banks and other financial services entities exposed by the Royal Commission have damaged trust in banks, and businesses themselves lack confidence due to an uncertain tax, regulatory and competitive outlook.

To address this, there are three areas where I believe governments, regulators, and banks need to work more effectively together: credit growth, business investment, and economic diversity.

The rate of mortgage credit growth is at an unprecedented low, and lending to businesses has grown only marginally compared to this time last year.

Tighter bank credit is often cited as a cause. 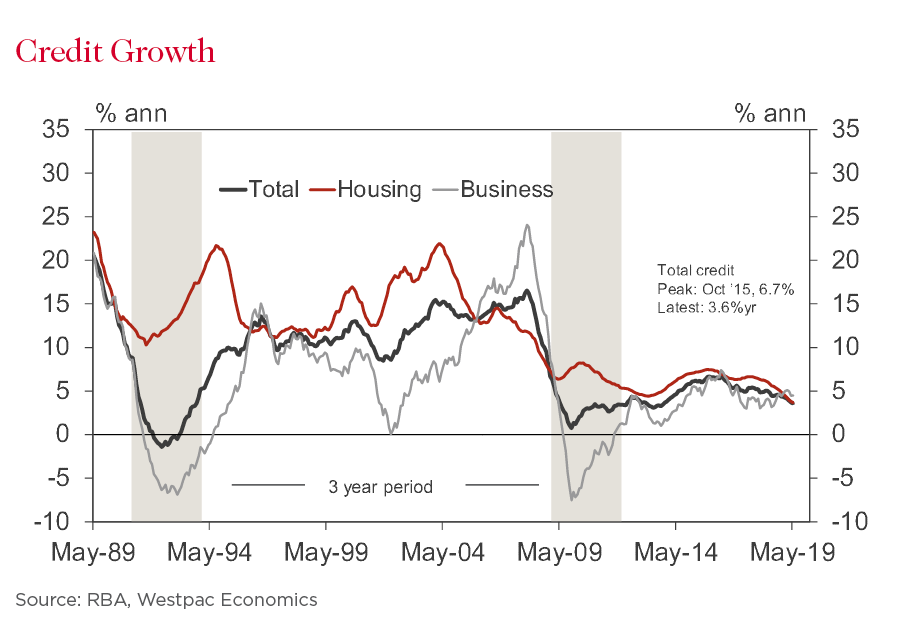 But banks want to lend. It’s a big part of why we exist, and how we make money.

And we want to do it responsibly. The responsible lending laws introduced by Parliament in 2009 are well intended, based on sound principles, and generally speaking, have worked well.

But in recent years, we’ve seen regulators become more prescriptive in their interpretation of what they believe banks need to do, both to comply with the law and to demonstrate that a borrower is creditworthy.

And given the severe consequences of getting it wrong, it’s not surprising that bankers are building extra ‘buffers’ into their policies and processes to make sure they stay well clear of the line.

But I do believe the unintended consequences of the current legal and regulatory approach pose a danger for our economy.

Kerry Stokes, one of Australia’s most successful businessmen ever and a long-time customer, summed it up beautifully when he recently said to me: “If we end up with only prescriptive regulation on credit policies, and no human touch, no entrepreneurial spirit, nor a continuing human support system provided by the lender, we will lose the next generation of budding business men and women.”

That’s not the bank we want to be for our customers.

And that’s not the banking system that Australia needs if we aspire to improve our standard of living and maintain our position as one of the world’s most successful economies.

As for demand for credit, there are ways we could help more Australians achieve the great dream of home ownership and the Federal Government’s First Home Loan Deposit Scheme is a great step.

However, to address long-term affordability we need to consider other changes.

For example, the big upfront cost of buying a home – particularly stamp duty – is both a barrier for buyers and a disincentive for people to sell a home that’s bigger than they need. Replacing stamp duty on purchases with a broad-based land tax would fix this and provide governments with stable revenue, as the ACT has been rolling out since 2012, without radical disruption of the property market.

I recognise that proposals like this are politically difficult, but they are worth considering if we’re going to help more Australians into their own homes.

In terms of business investment, when we speak to business customers about what’s holding back investment, the most common response is “bottlenecks in the system”.

For perspective, the cost of complying with government regulation has been estimated by Deloitte at around $94 billion per year – that’s money that isn’t being invested in technology, research, expanding overseas, reducing costs, and improving productivity.

In fact, total R&D spending is down dramatically over recent years. We’ve also seen a drop in the number of local patent applications over the last few years – which is not a great sign for future commercialisation.

The good news is that tackling bottlenecks is high on the Federal Government’s “to do” list. And states such as New South Wales have made great strides in modernising systems and simplifying the process of interacting with local government.

I don’t doubt you’d see an uptick in investment if there were fewer regulatory differences across jurisdictions, if state utilities and local councils moved faster on development decisions, if planning approvals for major projects were quicker, and if tax structures further rewarded investment in R&D and training.

And if we can get the demand for investment going again, banks like Westpac will be there to provide the funding.

As part of this, today we announced that we will soon launch a new digital, unsecured lending service which uses real-time transaction data and advanced analytics to make fast, online credit decisions for small businesses. We estimate we’ll make an extra $10 billion available in unsecured, conditionally approved limits for small businesses, without needing to put up other assets as security.

We remain excited about Australia’s economic potential. The latent potential is there, the physical and human capital is there, but it will take a focused and constructive dialogue between all of us to realise that potential.

For Westpac, we accept, and are clear-eyed about, the significant work needed to lift our standards.

But we are not letting our internal challenges distract us from the role we must play building a stronger and more sustainable Australian economy — because we’re all in this together.

This is an edited version of a speech Brian Hartzer delivered at a Trans-Tasman Business Circle event in Sydney on 30 July 2019.