Innovation or evolution? Mortgages through the ages

Less than a week before the government unveiled its new first home buyer scheme, similar discussions were again playing out on the other side of the world.

Reflecting on the design of mortgages over the years in Winipeg in central Canada in early May, Bank of Canada Governor Stephen Poloz brought up the government’s planned “shared equity mortgage”. While the details are still being thrashed out, the Canadian government’s motivation, he said, was to help “address housing affordability” for first-time homebuyers by providing an interest-free loan to add to a down payment.

Within a week just before the Australian federal election, Prime Minister Scott Morrison announced his own “First Home Loan Deposit Scheme” also aimed at “improving housing affordability” by assisting people who have saved a deposit at least 5 per cent – rather than 20 per cent – and thus avoiding the cost of lenders mortgage insurance. It marked the latest such move dating back to at least 1964, when the Commonwealth government began conditional cash grants to first home buyers, according to economist Saul Eslake, a critic of the policies who estimates governments spent $22.5 billion (in 2010-11 dollar values) on cash grants between the mid-1960s and 2011.

Yet despite governments’ latest attempts to give first home buyers a leg-up around the world, BoC Governor Poloz lamented a broader point: little mortgage product innovation in Canada, an economy that often gets compared to Australia’s due to its similar abundance of minerals and banking system.

“Of course, there are many other possible variations on mortgage design, so many that it makes me wonder why so little has happened in our mortgage market in my lifetime,” he said at the credit union event. “I hope that some of the innovative spirit that credit unions have shown in the past will be applied to the mortgage market in the future.”

Will Ranken, Westpac’s general manager of home ownership, says while the purpose of the mortgage hasn’t changed over time, the Australian market has seen several variations and options introduced amid shifting customer needs.

“There was the rise of mortgage brokers in the mid-2000s and the introduction of features such as offset accounts, redraw facilities, interest only and principle and interest repayment options over time,” he says.

“There’s also been low doc loans, guarantor loans, reverse mortgages, while more recently, we’ve also seen the rise of digital-led product and digital-only lenders. However, it is fair to say that more can be done to continue to innovate and change the way we help our consumers into home ownership.”

Mr Ranken says within the next decade banks will be offering full end-to-end digital capability enabling customers to complete a full property transaction on mobile devices. For Westpac, Australia’s oldest bank, tapping out a mortgage on your phone would mark a dramatic 65-odd years since ramping up home lending post World War II.

Westpac’s head of historical services, Kim Eberhard, says the bank entered retail banking – and thus mortgages – in 1956 following major changes to the Banking Act that enabled trading banks like Bank of New South Wales (which became Westpac) and the Commercial Bank of Australia to enter the space traditionally dominated by “savings banks”, of which the Commonwealth Bank was the major player.

Soon after, the Bank of NSW was offering deposits and loans directly to consumers, rather than indirectly via loans to building societies.

“For the first time the bank was of service to ordinary working people, rather than the small businesses (and big businesses) that had previously been our major source of customers,” she says. “The Savings Bank issued loans mainly for the new post-war surge in goods like fridges, washing machines and cars, but also mortgages, however I think this was entered into quite gradually.”

It was during this post-war period, from 1947 to 1961, that Australia’s home ownership rate recorded its biggest increase in history to 70.3 per cent, supported by government initiatives such as the War and Defence Service Homes Schemes, according to Mr Eslake’s research. In a 2013 speech, he said housing supply continued to outstrip population growth between 1961 and 1991 before the relationship broke down from the early 1990s as supply growth eased and demand for the Australian dream cranked up.

It coincided with the fruits of deregulation of the finance sector in the 1980s, the start of almost 30 years of economic growth and generally falling interest rates. More mortgage brokers popped up and new lenders had greater access to funding thanks to the expansion of the residential mortgage backed securities (RMBS) market.

As Reserve Bank data shows, between January 1985 and December 1988 the banks’ business lending grew at an average annual pace of 30 per cent, outpacing housing lending and being their biggest exposure. But following the recession and the introduction of the Basel capital accord that lowered the risk weighting of home loans in 1988, banks’ exposure to mortgages rose by 16 percentage points to 46 per cent between 1991 and 1995, and has risen further since. 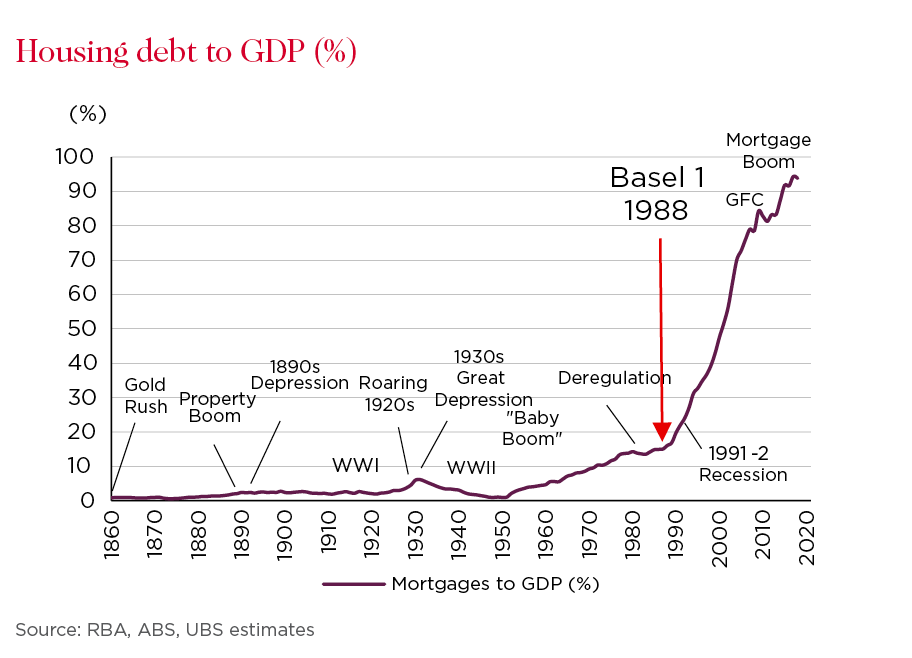 Aside from changes to the market structure and regulations, the RBA has also found that “considerable product innovation” in the mortgage market through the late 1990s and first half of the 2000s also played a role in expanding finance.

“Lenders sought to cater for a wider range of potential borrowers and found new ways to assess their borrowing capacity,” then-Assistant Governor Guy Debelle said in a 2010 speech on mortgages, referring to things like home-equity loans and redraw facilities. “Some of this innovation has resulted in an easing in lending standards and an increase in risk for both borrowers and lenders, but its overwhelming effect has been to widen the range of households who can access finance.”

As to why fewer people however own their home compared to the 1960s despite the mortgage market’s evolution, Mr Eslake’s research centres on less net new housing supply in recent times, plus government policies and tax incentives that have spurred demand. Hence, affordability has remained an ongoing political issue.

“The decline in home ownership rates among younger age groups is almost certainly due in part to changing preferences (including partnering and having children at older ages, and greater importance attached to proximity to employment or entertainment venues): but it also undoubtedly owes more to declining affordability,” he said. 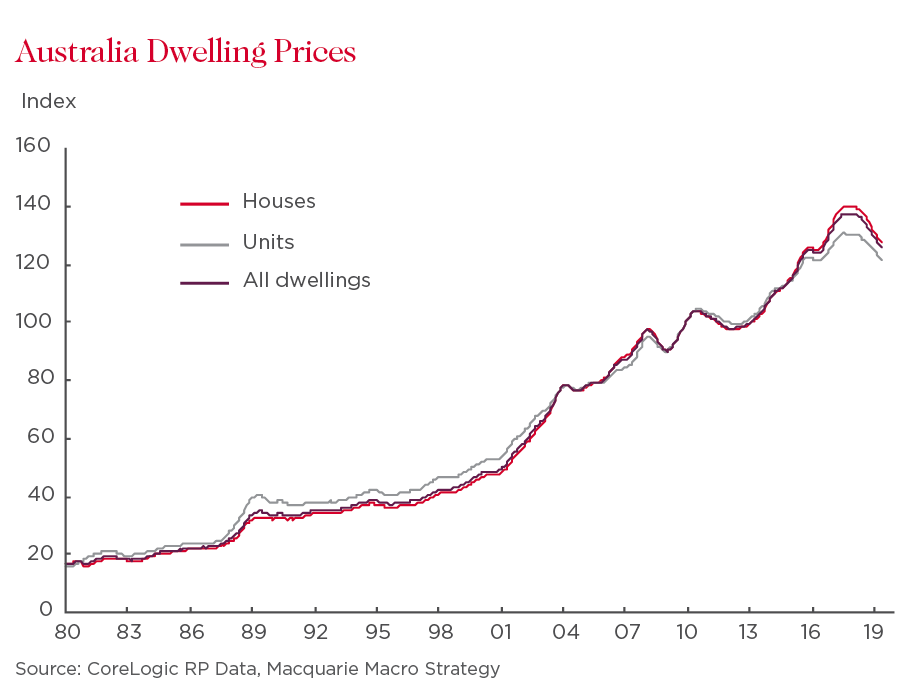 “Although most Australians are…physically well housed, it can no longer be said that we are, in general, affordably housed; nor can it be said that the ‘housing system’ is meeting the needs and aspirations of as large a proportion of Australians as it did a quarter of a century ago.”

In a repeat of history, reaction has again been mixed to the government’s latest effort to assist budding first home buyers feeling left behind, which is set to begin in January and has been supported by both major parties.

Some analysts caution about seeking to address affordability by stimulating demand, particularly to borrowers with little equity amid a soft housing market. Other experts have backed the scheme, arguing it will help stabilise the market and pointing to positive results from similar schemes, such as the Western Australian government’s Keystart initiative that assists people with low deposits before they eventually refinance with a traditional lender.

Mr Ranken says the scheme is a “welcome step in the right direction” and could assist around 10-15 per cent of annual demand from first home buyers. Economists have added that even with the scheme to allow borrowers to use a government guarantee to borrow more to reach a 20 per cent deposit, banks still must meet all responsible lending and other regulatory requirements, and higher loan to value ratio loans were riskier for lenders and borrowers.

“While this will likely boost activity in the segment, the effect may be muted if these are treated as ‘high risk’ 90 per cent-plus LVR loans,” Westpac senior economist Matthew Hassan says.

Ultimately, Mr Ranken argues Australian homeowners have been well served by the nation’s mortgage market for several decades and with competition as strong as ever as the likes of new fintechs enter the market customers will ultimately drive developments and reap the benefits. He cites how the broker channel has grown to around 60 per cent of new loan origination in the market because consumers see it as a valuable, affordable service.

“Ultimately, banks increasingly need to think about the service they offer customers throughout the life of a loan to support the really important life moment of owning a home but also help customers with needs beyond mortgages.”