Bold to bet against branches

One might look at the ongoing decline of bank branches in Australia and other countries over the past years and think their future is doomed. The world is moving to cashless payments, investment advice is increasingly automated and digital transactions are growing day by day.

The data tells the story: the number of branches in Australia has steadily declined from a peak of nearly 7100 in 1993 to around 5610 now, according to the Australian Prudential Regulation Authority. This decline has been even more dramatic in other markets, with the bank branch network in the UK more than halving in the last 12 years.

But reports on the death of the traditional bank branch are greatly exaggerated.

According to Accenture’s recent 2019 Financial Consumer Survey, Australians don’t visit branches much but when they do, they like the service. It found while 14 per cent of consumers go to the physical bank branch at least once a week, 62 per cent have a positive experience. That’s higher than the 57 per cent global average and compares with 74 per cent of people who said the same in the United States, 54 per cent in Singapore and 43 per cent in Hong Kong.

Inevitably, the impact of new technologies, competition from new entrants and the evolving demands of modern consumers mean there will continue to be fewer branches around as banks evaluate how they should reconfigure their branch network and space for the evolving nature of financial services. But rather than become extinct, they’ll be smaller, much more efficient and serve very different needs than they do today.

One trend we see taking off is banks redesigning branches to be an “experience store network” – a connected group of highly visible, digitally-enabled, multi-format, market-specific environments that offer a positive and personalised experience that supplements and complements customers’ digital experience. 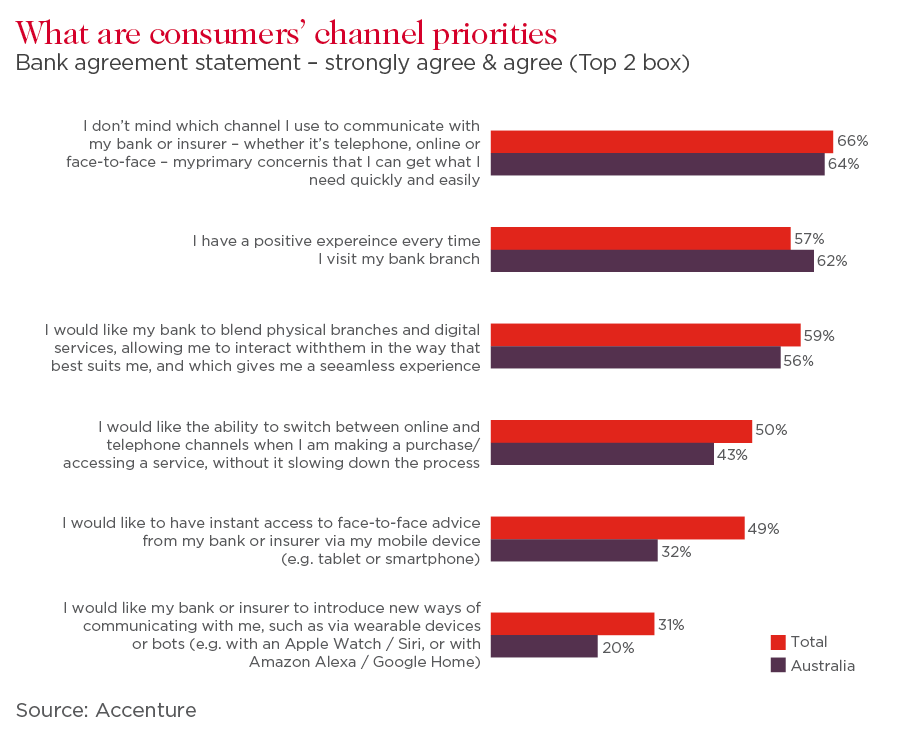 It creates a destination for customers who want human support, but also an environment that is welcoming and engaging. Based on our analysis, large banks that adopt such a concept can save about 13 per cent of their costs while also increasing network-driven revenue by 11 per cent – an attractive economic equation amid a tougher environment for banking.

This strategy makes sense for Australia, given the survey found there are more “traditionalists” – people who value human touch, conservative, tech avoiders and losing trust – locally than globally.

Yet Australia also has plenty of “pragmatists” – those who are trusting and channel agnostic – and many tech-savvy, fast-adopters.

The survey reflected this – more than half of Australians (56 per cent) said they would like their bank to blend physical branches and digital services for a more seamless experience, showing people still value face-to-face, personal interactions, but would like this to be complemented by digital data-driven insights.

Regardless of industry, consumers are craving more – and are willing to give to get. Around 76 per cent of consumers said they would be willing to share income, location and lifestyle habit data for rapid loan approval and 70 per cent would do so to receive personalised offers based on their location, such as discounts from a retailer.

While the shift to mobile may become the dominant channel, the branch of the future has a role to play in more focused face-to-face, value-added conversations for major decisions, such as buying a house or designing your retirement plan. The physical space and digital technologies will become shared conversations and journeys which bankers and customers can track, rather than prior decades of entering a branch for a loan and having a person in a branch typing on a computer screen that you’re not allowed to see.

It’ll move from a data entry type of experience (the data should be there already), to more collaborative and explorative conversations around the outcome – such as a home – that clients are seeking, rather than about the product.

Think about retirement planning and other “life moments”: you want the bank to help you achieve your dreams in retirement, not just give you a pension. Despite trust in the banking industry at a low ebb, our survey found 52 per cent of Australians trust a human advisor in branch for advice on products and offerings versus 8 per cent for an automated service.

Times have changed and customers have moved on, heavily influenced by their online experiences with other industries and companies – and it’s time for banks to catch up.

As this new, digitally-enabled and engaging breed of the branch emerges and multiplies, so will opportunities for banks.