But what may seem like strong numbers for niche professions a few decades ago doesn’t surprise Nell Hardie as the fast-growing fintech sector and large incumbents battle for the best in a limited pool of talent.

“The ideas behind these businesses are so new that the skillsets don't really exist yet,” says Hardie, who joined fintech venture capital group Reinventure late last year as head of talent to hire for and advise the start-ups within its portfolio, which has grown to 24.

“When you consider that Atlassian – Australia’s first big tech success story – really only took off just over 10 years ago, if I’m asked to search for a growth product manager with a decade’s worth of experience, that’s a rare person to find.”

Fintechs, or financial technology companies, secured the most funding of any start-up category in Australia in the 2018 financial year and average annual capital raised trended upwards, according to the EY FinTech Australian Census 2018. Investment in Australian fintechs during the year reached its second highest level at $600 million , while globally it topped $US111 billion, as reported in KPMG’s most recent Pulse of Fintech report.

In January, Australia’s first fully-fledged “neo-bank” also opened its doors after winning a full banking licence, adding to a raft of inventive digital banking add-ons being unearthed across the young, yet maturing, fintech landscape.

But while the appetite for ideas and funding seems insatiable, finding people to help run and scale those businesses is proving challenging, according to Hardie.

The former executive search and tech recruiter with Derwent Executive and Harvey Nash estimates across Reinventure’s portfolio alone, up to 60 roles are currently advertised, including 10 executive positions, adding to an existing combined workforce of around 600. Extrapolated across the sector, the numbers are huge and will only become more pronounced as artificial intelligence and machine learning take hold.

According to EY, half of fintech leaders agree Australia lacks experienced start-up and fintech talent, while attracting suitable or qualified talent was identified as the top internal challenge for this year.

“The skills that tend to be the most challenging to find are engineering, product, growth and performance marketing – data driven marketers, rather than traditional brand marketers – as well as data science and cyber security,” says Hardie. 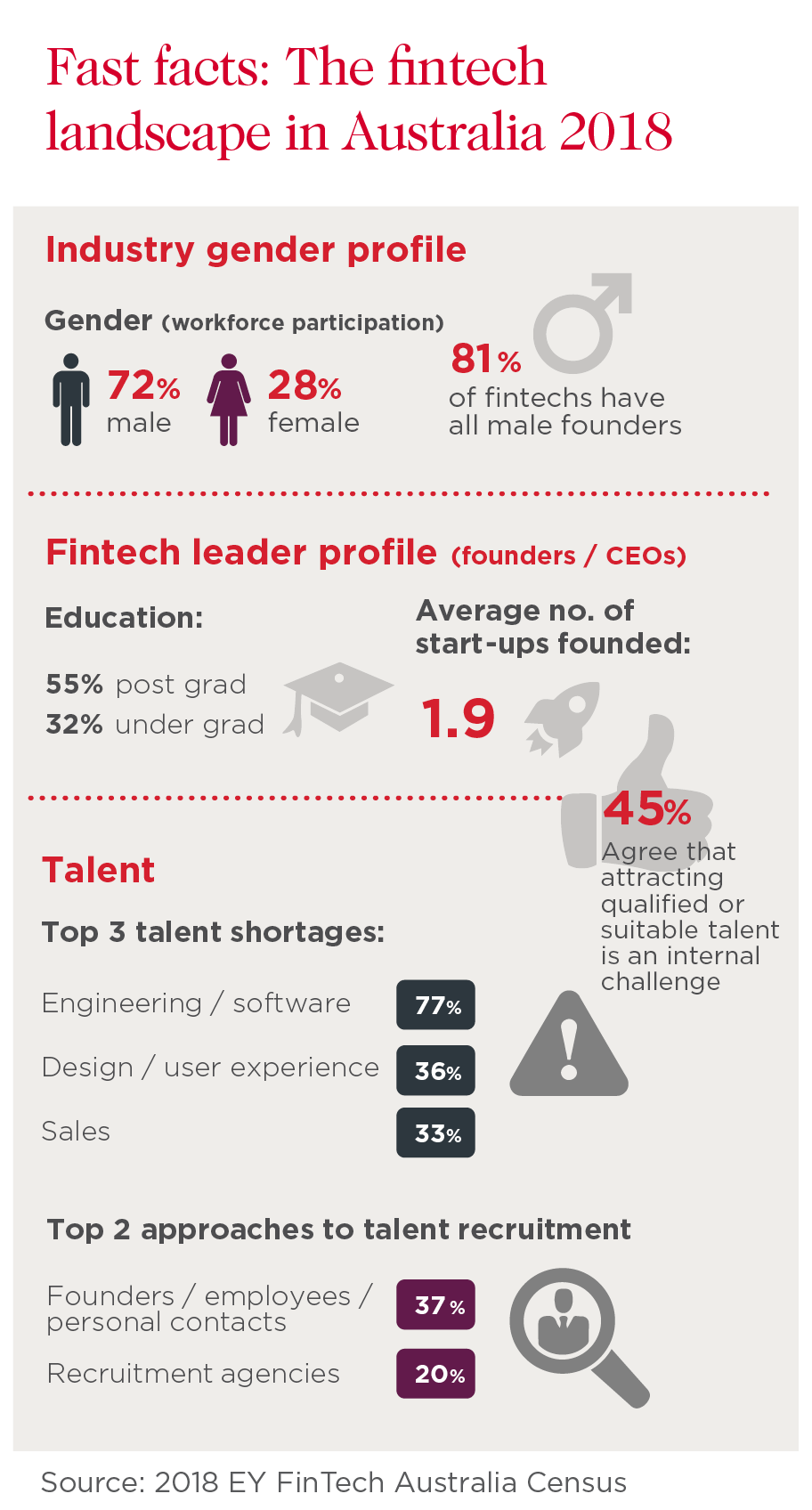 As an issue that affects most industries, plugging the tech skills gap is a focus for many governments and corporates around the world, sparking numerous grass-roots programs like Westpac’s STEM work experience and young technologist scholarships programs, which will ultimately benefit fintechs too.

In recent years, IT jobs have been some of the strongest growing, alongside health care and professional, scientific and technical services, according to the Reserve Bank, creating what some claim could turn into a worsening skills shortage unless there’s a spike in Science Technology, Engineering and Maths graduates.

Hardie, one of only a couple of in-house talent executives in the Australian VC sector, says she’s devoting a lot of time to building up a global strategy to tap talent – including Australian expats – from more developed fintech hubs in the US, Europe, Israel and South East Asia.

“As we’re seeing more political and economic uncertainty in the world, we’re finding that expats working oversees are becoming more open minded about returning home than, say, five years ago,” she says.

“We’re spending time in some key tech hubs around the world, and connecting with Aussies to create a network, so when they’re ready to return, we can present them with opportunities and bring those skills back into the Australian economy.”

In addition, fintechs have a growing pool of local executives eyeing the space, Hardie claiming there’s no shortage of people in traditional corporate roles drawn to the buzz of the sector.

“It’s where the ideas are and innovation is happening. Ultimately it will be the future of what the big corporates are adopting. They're not calling it disruption anymore – it’s simply what’s happening,” she says.

“The banks are being so heavily scrutinised and ‘Open Banking’ is coming – it’s a perfect storm for fintechs to become increasingly influential in mainstream finance, so people are seeing a genuine opportunity to work in the sector.”

To make the transition, her advice – particularly to those with no experience in early stage businesses – is not to “box yourself into a role”, but be able to demonstrate a “growth mindset, big picture thinking, adaptability and strong work ethic”. Also, candidates need to be able to articulate motivation, and show a willingness to “muck in”.

Unsurprisingly, remuneration is topical. While competitive, the structure of remuneration is generally different from corporate salaries, executive roles usually have an equity element triggered by the success of the business. Hardie says the right people for the industry accept their base salary may be lower, but the overall package can be be “really compelling”.

But Hardie says the biggest mindset shift for most people moving from a professional services model into the fintech ecosystem is that it’s no longer transactional, but personal.

“These founders put their heart and soul into their businesses. Ultimately, they want to look into the whites of your eyes and see the truth, the hunger, and the grit. They need people that buy into, believe, and want to be part of making the business successful.”

Freeing up super for fintech innovation