Perhaps the legendary 1970s champion racehorse Gunsynd, affectionately known as “the Goondiwindi Grey”, springs to mind when you hear of Goondiwindi, the Queensland town with fewer than 6000 people near the New South Wales border.

Or maybe you heard the town was crowned last year by social commentator Bernard Salt as the best in Queensland, outperforming all others for its above-average income, low unemployment, demographic diversity and cohesive community.

What’s not so well known is that Goondiwindi – or “Gundy” to the locals – which lies at the heart of a major agricultural production region nestled in the banks of the Macintyre River, is the birthplace of many world-leading advances in agricultural technology, dubbed “agtech”.

“On a per capita basis there is more agtech being developed here than anywhere else in Australia,” says Jerome Leray, Goondiwindi-based founder of drone-to-tractor fallow weed solution start-up, InFarm.

“These are not small inventions. They are major agricultural innovations that are now deployed world-wide and were all developed in Goondiwindi.”

Another local business owner Maurice Hayes, who has seen more than six decades of agricultural breakthroughs spring up around the region, credits the phenomenon to the willingness of progressive local growers to try different approaches, dating back to the conservation tillage systems developed locally in the 1970s.

“It was probably the biggest agricultural change we’ve seen in Australia and the world, and it started here driven by my brothers Tim and Dennis,” says Hayes, who has also pushed many agtech boundaries – including creating the world’s longest boomspray in the 1990s.

Hayes, who has grown Hayes Spraying from a small contractor in the early 1970s into a major manufacturer of hi-tech agricultural equipment distributed locally and internationally, says the region’s progressive approach has led to it becoming one of the most productive agricultural areas in the nation, citing local cotton growers as “some of the highest yielding, most efficient cotton producers in the world”. 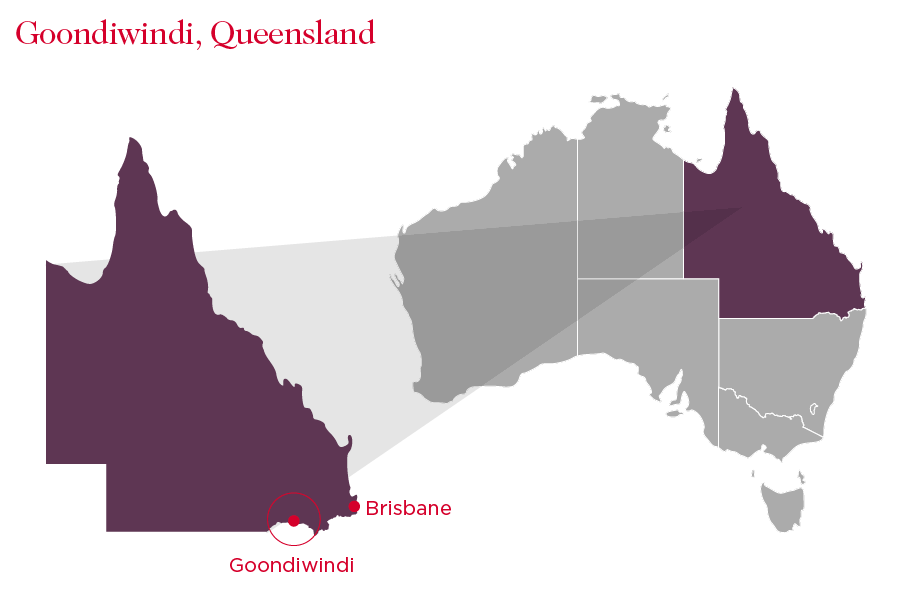 Local innovator, Tom Dowling, can take some of the credit for this success. The former agronomist, who founded Goanna Telemetry in 2001 and merged the business last year with Discovery Ag to form Goanna Ag, has developed on-farm telemetry sensing technologies – from weather stations to soil moisture probes – that provide growers data to improve water use efficiency.

“We can tell farmers accurately what their daily water use is going to be for the next 10 days, to give them an accurate irrigation date,” Dowling says.

“We can tell them where their soil moisture level is, where their irrigation refill level is, and how the weather is going to change. It gives them the information to make that decision whether to irrigate or hold off.”

This is changing the game for growers, particularly of cotton. Dowling says while cotton growers are already some of the most efficient irrigators in the country, they are always open to new technology to continue to improve efficiency, something that's particularly critical in times of drought like the prevailing big dry affecting the eastern states of Australia. He says every day a cotton crop is under stress can cost growers $100 per hectare.

While demand for Dowling’s technology has grown steadily over the years, one of his biggest obstacles had been a problem faced by most rural data-based companies – lack of connectivity.

But instead of waiting for someone else to fix it, Goanna Ag swung into action.

“There’s a lot of areas throughout rural Australia where we just can't get sufficient 3G or 4G signal to get the data off the farm. That drove the investment to roll out a network of a technology called Long Range Wide Area Network – or LoRaWAN – which is essentially a low power, long range radio frequency,” he says.

Working in partnership with the National Narrowband Network, Dowling says the LoRaWAN network enables low cost transmission of little packets of data where there are gaps in the 3G and 4G networks. This has halved Goanna Ag’s costs compared to traditional cellular connectivity products, which in turn has attracted a significant boost in customers of its telemetry services.

Since starting the network roll-out a year ago, Dowling estimates its coverage extends across around 3 million hectares – or around 80 per cent of the cotton industry – and more gateways are being installed weekly.

To fund the roll-out, Goanna Ag – chaired by David Spence, who also chairs Paypal Australia and the National Narrowband Network of Australia – raised $3.35 million in September from a consortium of investors including Westpac. Dowling says the group is looking at another funding round to expand the network further, including into the dry land cropping areas in Western Australia.

While Westpac’s stake in Goanna Ag is the bank’s first direct investment into an agtech business, national head of agribusiness Steve Hannan is confident it won’t be the last.

“It’s such an exciting space,” Hannan says, noting the bank’s involvement with Goanna Ag initially started through an introduction from long-term customer and co-investor Delta Ag.

“Australian agtech is still in its infancy, but it’s building in maturity quickly. These are the investments we need to start making… because we see this as the future.”

The investment in Goanna Ag enables the bank to be “part of the conversation” around how data is used to help farmers make better risk decisions in real time and build products of the future, says Hannan. He also notes the remarkably supportive and innovative Goondiwindi environment makes it “the perfect ecosystem” to drive ideas forward.

Capital raising is also in the sights of Jerome Leray to scale his locally developed InFarm weed detection technology, which he says enables farmers to reduce chemical sprays by a substantial 80 to 95 per cent.

InFarm’s drones survey the paddocks and, using revolutionary artificial intelligence algorithms, a map is created with the exact location of weeds and transferred using a USB into a tractor’s system. As the tractor navigates across the paddocks, it automatically controls the chemical spray nozzles, turning them on only when it passes over weeds. While other camera sensor solutions do a similar job, Leray says InFarm’s technology fits in with farmers’ existing machinery without needing expensive modifications.

“It's a huge chemical saving,” says Leray, who has ambitions to make his technology available to every broadacre farmer in Australia, before turning to the rest of the world.

“Most chemical sprays cost no less than $10 per hectare, which means our technology is saving them at least $8 per hectare. Many broadacre farms around Australia have up to 5000 hectares…which need to be sprayed five times. That’s a saving of $200,000,” he says. “And that's just the dollar savings. It’s also really good for the soil ecosystem and the environment.”

Leray, whose business was the first commercial outfit in Australia to be awarded a Microsoft “AI for Earth” grant recently, says despite the good agtech ideas emanating from Goondiwindi and other rural centres around Australia, the inability to secure funding means many are not getting off the ground, which is a drag on the broader economy.

A quick analysis of the record-breaking levels of venture capital pouring into technology start-ups in Australia shows agtechs don’t feature prominently. Indeed, the sector was earmarked as having the lowest proportion of “innovation-active” businesses in Australia in 2017-18 by the ABS. Some commentators say this is surprising given the opportunities in a sector expected to be valued at $100 billion by 2030, up from today’s $59 billion, with much of the growth expected to be driven by agtech, according to the National Farmers Federation.

Westpac’s Hannan agrees Australia hasn’t caught up to its international peers which embrace agtech, but says a “collaborative and multifaceted approach” is underway to build momentum, including creating events like the first Evoke Ag innovation conference in February designed to put the sector on the world-stage.

In Goondiwindi, around 15 locals including Dowling and Leray aren’t sitting on their hands, six months ago forming an “agtech hub” chaired by Maurice Hayes.

Hayes says the hub aims to bring together local growers, manufacturers, agronomists, government bodies, regional councils, academics and investors to help support commercial agtech ventures and drive local ideas through investment or by opening doors to engineers or software programmers to get their product to market, noting the advantages of investing in ideas at the "coalface" rather than in city based institutions.

“There's always strength in numbers when it comes to attracting funding,” says Hayes, who says the hub will explore a variety of funding sources, including government grants, venture capital, major banks and local retired farmers.

“I grew up from a zero capital base 40 years ago, so I know the hardships of getting funding when you're small and how difficult it can be. It's a major problem with innovators, trying to get funding and then trying to get into networks to advance your ideas. In regional areas you don't find electronics engineers and people with the skills you really need.”

The 65-year-old sees the agtech hub as a way he can leave behind a legacy for the region.

“I want to spend a lot of the remaining time I’ve got trying to help young people to continue to advance new ideas. That's where I’m at.”