The forecast underlying cash balance of $7.1 billion in 2019-20 follows 11 consecutive years of deficit and marks the first surplus since 2007-08.

A $19.5bn expansion of last year’s "Personal Income Tax Plan" headlines the major policy initiatives over the four-year estimate period. This is complimented by a lift of $25bn in allocations for new infrastructure investment.

Overall, new spending in the near term is relatively modest and falls short of a meaningful boost to an economy that slowed to an annualised pace of just 1 per cent in the second half of last year whilst being buffeted by unprecedented house price falls. 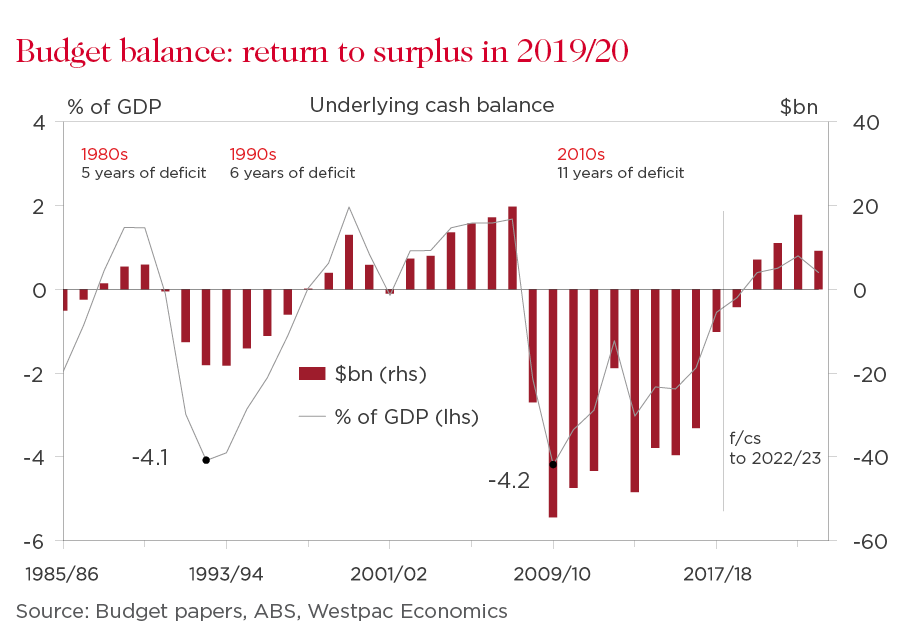 The net impact of new spending and tax policy measures is only $9.9bn across the four years to 2021-22 (or $19.7bn if provisions from MYEFO are also included), a relatively modest boost in the context of a $2 trillion economy.

Likewise, infrastructure spending commitments are spread over many years, providing little near-term support to the economy, although we acknowledge the importance of infrastructure not only to support demand but also to supplement supply and boost productivity.

The government had a realistic option to adopt a higher track for commodity prices and accept somewhat lower surpluses to free up more spending capacity in the near term to support the economy. For example, only a $200 million boost was offered in 2019-20 to broaden access to accelerated depreciation by increasing the asset value from $25,000 to $30,000 and opening up the opportunity to medium sized businesses with a turnover of up to $50m (previously $10m).

Note that iron ore prices, for which current spot is $US93 a tonne ($US89 a tonne free on board), are forecast to fall back to $US55 a tonne (FOB) by March 2020 and to hold at that level thereafter. With mining companies carefully managing supply, and clear evidence that China is restimulating its economy, this profile seems remarkably cautious.

The Budget did acknowledge growth headwinds, downgrading 2018-19 real GDP growth to 2.25 per cent from 2.75 per cent in MYEFO. Growth is then forecast to pick up to around “potential”, 2.75 per cent, in 2019-20 and hold there in 2020-21, supported by a lift in consumer spending and business investment and a continuing boost from public demand and exports. Despite some loss of momentum and risks around issues such as trade tensions, global growth is also forecast to provide support.

These economic forecasts, in the short and medium term, appear to be optimistic.

We are less upbeat across most aspects of the domestic economy, including wages and inflation, forecasting real GDP growth to ease to 2.1 per cent in 2019-20. 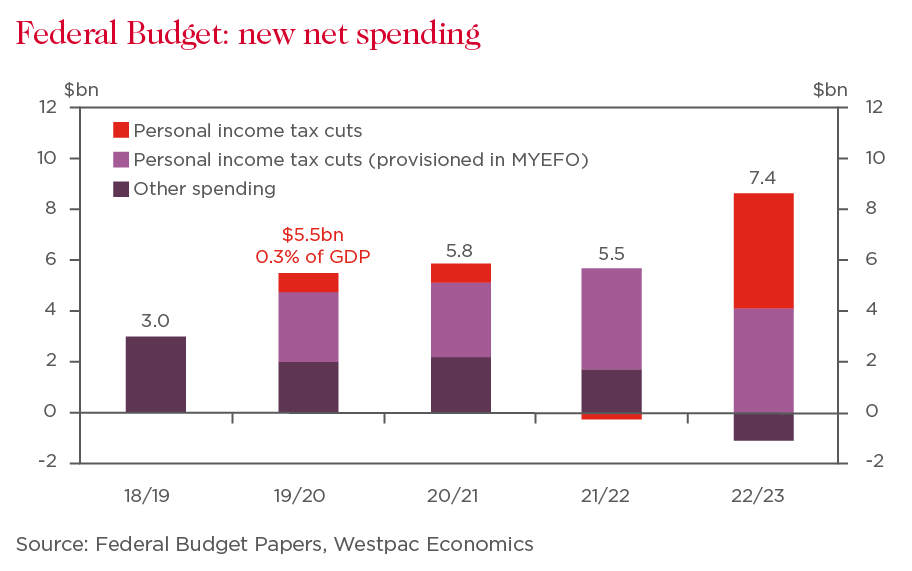 With house prices falling and residential construction slowing, risks to the domestic outlook rightly centre on housing and the consumer.

The budget forecasts consumer spending to lift back to 2.75 per cent in 2019-20, supported by solid job gains, a slight firming in wages growth and tax relief measures. The household savings ratio is expected to remain broadly steady, implying little or no “wealth effect” on demand from lower house prices. In contrast, with house prices likely to fall further before affordability improves and the market stabilises, we expect the savings ratio to rise and weaker private consumption of 2.2 per cent in 2019-20 and 2.3 per cent in 2020-21.

Measures included in Budget 2018 offer households a further benefit of $3.8bn (0.29 per cent of disposable income) impacting in the 2019-20 year, though this income benefit is funded by other measures, primarily combatting illicit tobacco use. This income boost is not large enough to offset falling houses, low wages growth, rising savings rates and softening global growth.

Whilst we have been discussing specific initiatives in Budget 2019, it is important to not lose sight of the overall stance of fiscal policy.

The budget is forecast to move from a deficit of $4.2bn in 2018-19 to a surplus of $7.1bn in 2019-20 and that represents a tightening of 0.6 per cent of GDP. While central banks do take notice of individual policy initiatives, the overall stance of fiscal policy is also a factor in determining the importance of budgets for the near-term growth outlook.

Westpac expects that the Reserve Bank will revise down its growth forecasts for 2019 and 2020 in its Statement on Monetary Policy which prints on May 10. Those revisions will take into account the likely fiscal outcome. We expect that the revisions will be sufficiently significant to motivate the Bank to adopt a clear easing bias.

By August we anticipate that we will see the first reduction in the overnight cash rate for three years. That will be followed by a further cut in November.