A remarkable trend has been lurking, largely unnoticed, among consumers for years: women are decidedly less upbeat than men.

Over the entire 43 years since the monthly Westpac-Melbourne Institute Consumer Sentiment Index started, sentiment among women in Australia has on average been 8.5 points lower than men.

Incredibly, there are only eleven months – out of more than 500 – in which sentiment among women has been higher, says Westpac economics director Matt Hassan, who unveiled the findings in Westpac Institutional Bank’s latest Red Book.

One notable inversion in the index – which measures consumers’ confidence in the economy, including how they feel about their household financial situation and spending on household items – happened during the Sydney Olympics in 2000. Hassan puts this down to the “Cathy Freeman” effect – a woman having success on an international stage in sports.

Other spikes occurred in 2012 around the time then Prime Minister Julia Gillard delivered the so-called “Misogyny Speech” and Barack Obama was re-elected US President, and when the carbon and mining taxes were introduced. On the flipside, inversions occurred when men’s sentiment collapsed more than women’s, including the 1989 “Black Friday” share market crash. 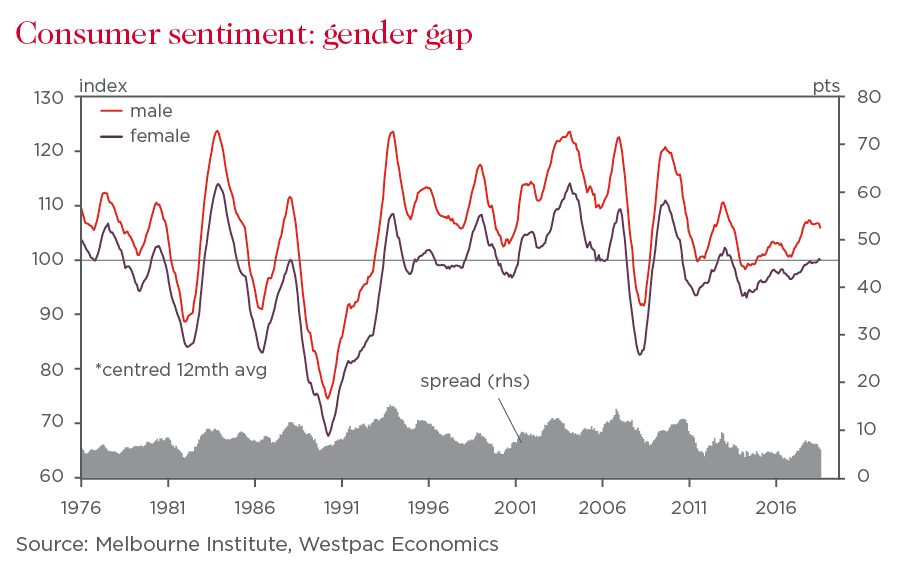 When he dug a little deeper, what surprised Hassan even more is that the “gender sentiment gap” is not unique to Australia.

One study of similar indices around the world found in no fewer than 18 countries men were “strikingly more optimistic about the future performance of key economic and financial indicators than women”.

It’s certainly true in the United States, where the gender gap has appeared in the University of Michigan’s Index of Consumer Sentiment since it began in the mid-1970s. Another US survey, the Bloomberg Consumer Comfort Index, even showed the gap expanded to 19.4 points in October, its widest in 28 years. 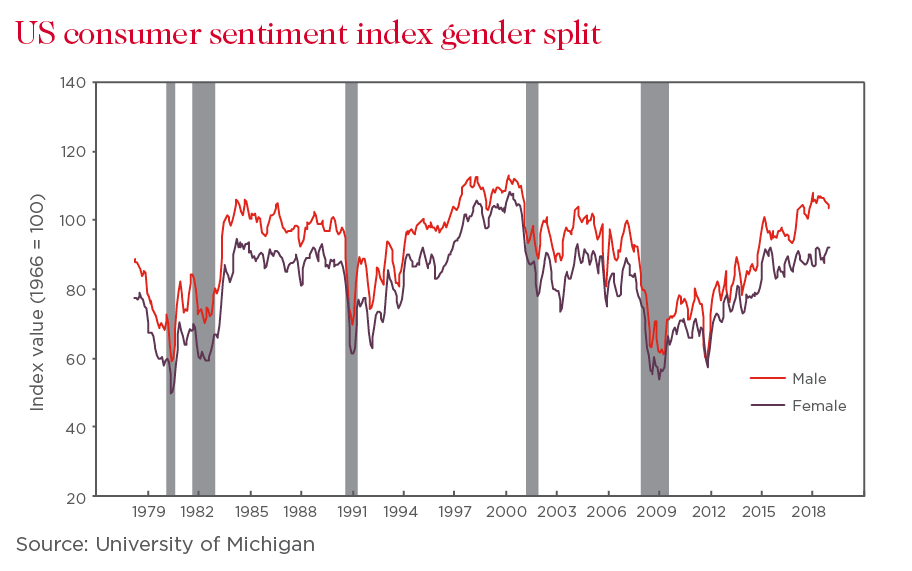 While the trend seems to be a clear feature of most developed economies, Hassan – along with other economic and social experts who spoke to Westpac Wire – concedes the reasons why are a little murkier. Surprisingly, this particular “gender gap” seems to have had little investigation.

“I don't think it's a glass half full versus a glass half empty kind of thing,” says Westpac’s head of women’s markets Felicity Duffy, who speculates the gap may have links to research she’s seen that women control 80 to 90 per cent of all household purchases in Australia.

“It's not about optimism; it's sentiment about purchasing and because women are predominantly making those household decisions, they’re seeing the highs and lows of what's going on.”

Hassan agrees household dynamics play a part, particularly given more women than men head up single parent households. The most recent Census showed that among the six million families in Australia, about 16 per cent had a single parent, of which females made up 82 per cent.

Among them is Sarah Hope, a single mum of one, who says rising concerns about household finances played a huge role in her decision last year to sell her home in Sydney and start a new job and life in Canberra.

“I'd become more aware of the fact that I'm the single earner. It was scaring me a little bit, because I didn’t know how I was going to be able to ensure there’s money there for [my daughter], and for when I retire.”

Hope says returning to full-time work in a new job that offers her flexibility to be able to do school drop-offs and pick-ups, along with Canberra’s comparative ease of living, have helped. But the cost of power bills and rates are no cheaper.

“I've gone from being someone who pays my bills up front always, to someone who has a payment plan on everything. I need to do that to make sure there’s enough there to cover things that are unexpected, like medical expenses,” she says.

“I think generally women tend to worry a bit more about these things. It’s in our nature.”

Statistically fewer women are in paid work than men, and women earn less overall – averaging a rate ratio of 0.89 of male earnings, according to the Australian Bureau of Statistics. This, along with other differences in labour market experiences between the genders, is also likely to be playing to the sentiment gap, says Hassan.

“Women are more concentrated in sectors like healthcare and education, which tend to be government administered, where your progress is set down pretty clearly. You don't suddenly hit the jackpot,” he says.

“If you felt like you were on a slow track because it’s just the nature of your industry, then that probably shapes the way you see the world as far as your finances are concerned. If you’re budget constrained, you’re less likely to be a discretionary risk-taker.” 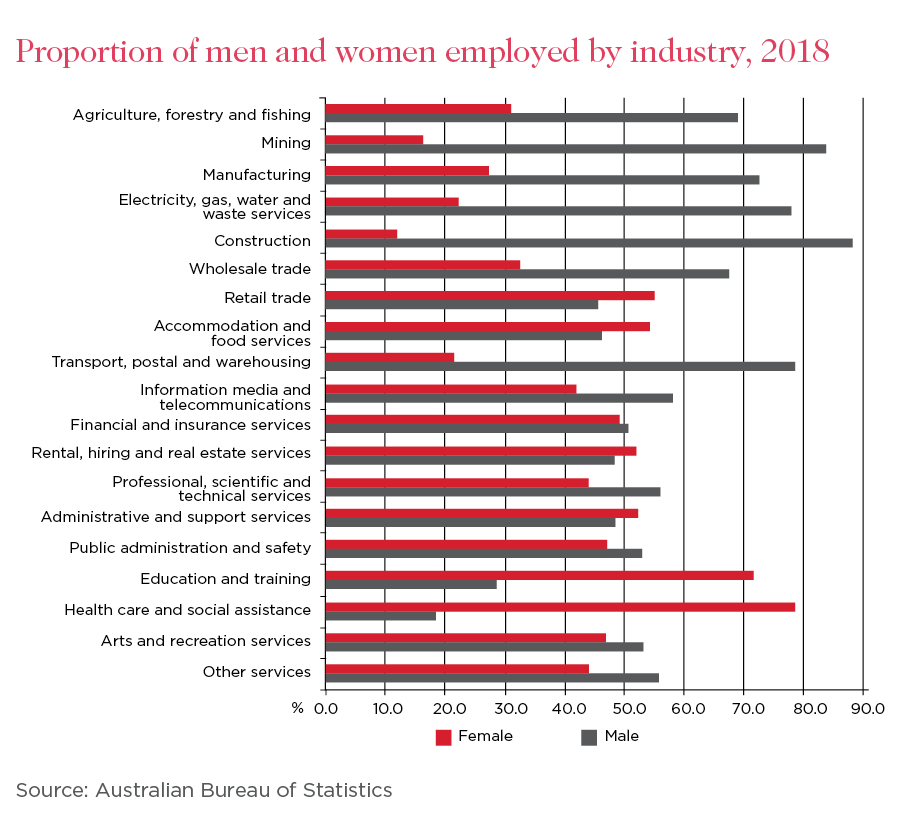 University of Sydney Business School’s Associate Professor Shumi Akhtar, who says she’s become “intrigued” by this gap since starting research into it last year, has found in addition to environmental influences like labour market dynamics, there are a number of other factors at play.

“No matter how much wealth we have, and even if the economy looks hunky dory, women will still be quite sceptical, while males are more open to taking risks,” Dr Akhtar says.

In addition to this natural conservatism, her preliminary research has found that a smaller proportion of women than men are “tuned in” to what's going on in financial markets, and women tend to show lower levels of financial literacy. A striking finding of last year’s Household, Income and Labour Dynamics in Australia (HILDA) Survey showed only 35 per cent of women could correctly answer questions about numeracy, inflation and portfolio diversification, compared to almost 50 per cent of men.

But Dr Akhtar predicts the gap will narrow significantly in the next five to 10 years, as other gender gaps are closed.

“There is increasing pressure for female participation in the workforce and in higher levels of education, and our minds are changing. More women are becoming business owners, the number of females dealing with financial markets is increasing, there is less reliance on partners,” Dr Akhtar says.

“This will see the gap eventually narrow. If there’s still a little bit of a gap, that will probably be genetic,” she says, noting she predicts a flow-on will be a more "smooth and efficient" economy due to less extreme risks in financial market decisions.