Start-ups must stare into boardroom battle

Ten long years of retrofitting corporate cultures, changing policies and working hard to build more diverse candidate pools has brought us to the point where women make up almost a third of S&P/ASX 200 company boards.

According to the Australian Institute of Company Directors’ recent data, women represent 29.7 per cent of S&P/ASX 200 boards, up from a low 8.9 per cent in 2009, and a new stretch target of 40 per cent over three years suggests ongoing growth is desired.

But four of these companies still don’t have any women on their boards.

So would it look much different if we could design the system from scratch? It turns out, not much. In fact, worse.

When looking at the burgeoning start-up ecosystem in Australia, more than six in ten – or 62 per cent – don’t have any women on their boards, according to research released today by KPMG High Growth Ventures. When removing the ventures founded by women (who all have at least one board member, for obvious reasons), this statistic rises to 73 per cent. This may not be surprising to those working in the tech industry, given the disproportionately large number of male founders (77 per cent, according to the Startup Muster 2018 survey), investors and employees.

Don’t get me wrong. I work alongside and interact with supportive and inclusive men across this industry every day, and believe they too want a more diverse ecosystem.

But this is about more than incrementally increasing representation of women in technology and start-ups. It’s about the huge opportunity to shape the future of Australia’s traditional industries and create the next generation of S&P/ASX 200 companies.

If things don’t change, another generation of women risks missing the boat on having an equal stake in the wealth creation, decision-making power, and equity ownership of these businesses of the future.

Our local start-up scene is much less mature than international hubs like Silicon Valley, so we have a unique opportunity to get the landscape right the first time around; to remedy systemic generational inequity, but this means getting women seats at the table – now.

Intuition suggests the most logical place to tackle this issue is to back more women founders – and this is where most current industry efforts are directed.

And, by the way, the business case for this is strong: Recent research showed that of 350 companies that went through US-based MassChallenge accelerator programs, for every dollar of funding received, women-founded start-ups generated a return of 78 cents, while male-founders generated less than half that, at 31 cents. This is despite women-founded businesses receiving only 2.2 per cent of total venture funding in both 2017 and 2018 in the US.

But to get more women founders, we need to also tackle other critical elements of the start-up ecosystem, such as increasing the pipeline of young women joining early stage start-ups, promoting women to senior roles at growth-stage and boosting women’s participation on start-up boards.

More senior women across the start-up scene will provide fertile ground for women to test ideas, gain experience and, most importantly, build networks and referrals – one of the greatest barriers for board members.

I know plenty of candidates with great executive and technology careers behind them who are actively interested in contributing to a board, but many tell me the stumbling block is a lack of referrals.

This is reinforced in the KPMG study released today, which found most start-up boards don’t appoint members via a formal process, nor do they use professional recruiters. They also don’t tend to strategically recruit to plug a knowledge gap, and few have diversity targets. Rather, they tend to source board members via the founder’s (or their investors’) personal and professional networks. 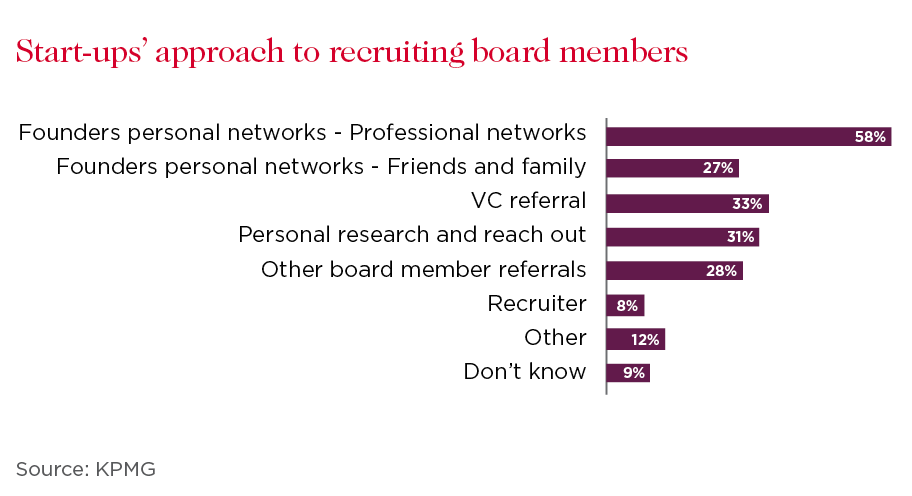 In addition, 40 per cent indicated that the shortage of women on their boards is driven by a shortage of investors who are women, given that early stage start-ups tend to consist primarily of founders and investors.

It follows, then, if you don’t know a founder, or you’re not an investor, you’re not even in the game.

At Reinventure, we’re working with partners in the ecosystem on a range of initiatives, including a program - Get on Board - to build a directory of capable, board-ready women and open doors to start-ups looking to add non-executive directors.

To kick it off, we held an event today hosted by Westpac – a collaboration with Innovation Bay, Heads over Heels and Scale Investors – which brought together a roomful of executive women alongside 10 start-ups, four of which pitched their businesses to the room. The goal was to start conversations and build a referral engine which, over time, will lead to board appointments.

While these initiatives and others, such as our Women In Venture student program, won’t fix the imbalance overnight, if we do nothing and women remain absent at the most senior levels of influence, the next generation of businesses will look the same as today, if not worse.

Given our ecosystem is still in the early stages, the opportunity to ensure that doesn’t happen is now – and we need to pull every lever we can to create that future.

Lauren is a community strategist and disruptive innovation specialist passionate about the development and application of new business models, corporate social innovation, impact investment and fostering entrepreneurial capacity, particularly in women. As Head of Venture Community at Reinventure, Lauren focuses on strengthening collaboration across the portfolio, deepening connections with strategic investor Westpac, and building networks in the broader FinTech and startup ecosystem, both in Australia and globally. Previously, Lauren co-founded Collaborative Lab with author Rachel Botsman and is also co-founder of Common Room co-working space. She is the curator of the Sydney Global Shapers, a community of the World Economic Forum, and act as an Ambassador for B Lab ANZ. She was named as a top 35 “Standout Star” in the 2018 Women in FinTech Powerlist by Innovate Finance in the UK.