Beyond business: CEOs urged to step up

In Larry Fink’s annual letter to CEOs this month, the word “purpose” appeared 21 times, more than the likes of “why”, “with” or “what”.

“Because” didn’t even make an appearance.

But that shouldn’t suggest Fink, the co-founder of BlackRock, had little to explain.

The leader of the world’s biggest asset manager with more than $US6 trillion under management laid out his thinking on a range of topical issues, from heightened global economic uncertainty to the rising power and influence of millennials.

Permeating throughout, however, was the call for companies to express and fulfil their purpose and take a bigger role in addressing social and economic challenges, wading into the divisive debate around the role of corporates in topical political and community issues.

But notably for Australian leaders ahead of the federal election, Fink’s call to arms came with a rather unsubtle urging to act quickly as years of muted wages growth, uncertainty surrounding the impact of new technology and political “dysfunction” weigh on confidence about the future.

“Unnerved by fundamental economic changes and the failure of government to provide lasting solutions, society is increasingly looking to companies, both public and private, to address pressing social and economic issues,” he tells the CEOs of the companies BlackRock invests in, which includes many Australian companies.

“The world needs your leadership.”

While admitting there’s no one size fits all approach and companies cannot solve everything, the commentary appears both perceptive and somewhat surprising.

On the one hand, politics is mired in Brexit, the US government shutdown and revolts against globalisation and inequality. In addition, high government debt in many countries, including in the US, is raising concerns about future spending capacity and central banks have little room to stimulate economies through cutting official interest rates. But on the other hand, big business – whether banks in Australia or tech companies in the US – have suffered loss of trust and lingering mixed sentiment since global financial crisis.

Yet some of this may be easing for business, particularly among employees.

Last week, Edelman’s 19th annual survey of more than 33,000 people across 27 markets found trust in business globally rose 3 percentage points to 56 per cent, just below NGOs at 57 per cent but above government (48 per cent) and media (47 per cent), the least trusted institution. Australian businesses are no longer distrusted after a seven point jump to 52 per cent. 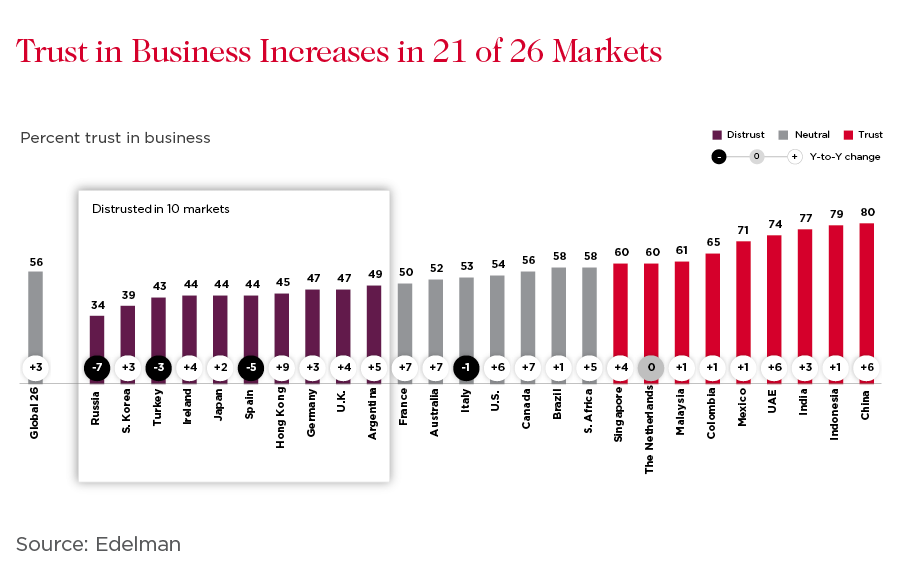 In fact, employers globally have become people’s most trusted institution at 75 per cent, even topping NGOs. But expectations of corporates are rising: 73 per cent of respondents agreed “a company can take specific actions that both increase profits and improve the economic and social conditions in the communities where it operates”, up 9 percentage points, with similar results for Australia.

And people are looking to the top to respond, 71 per cent of employees agreeing it’s critical CEOs respond to challenging times, whether that be industry issues, political events, national crisis, or issues such as pay, diversity and retraining. Overall, 76 per cent of respondents believe CEOs should “take the lead on change rather than waiting for government to impose it”, up 11 percentage points. 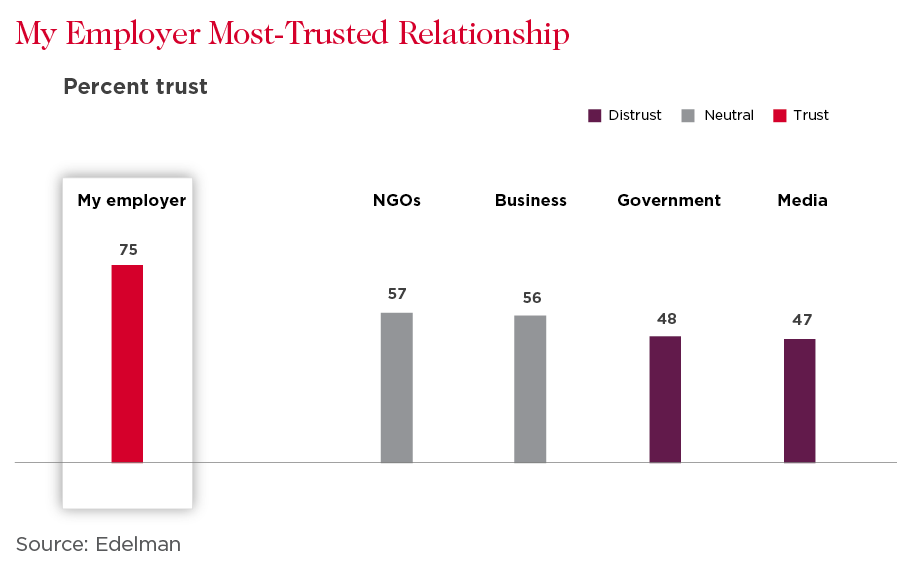 “You need CEOs to stand up and speak up and speak out. This is the new mandate for business. It is time for business leaders to step into the void. We have an absence of leadership, we have populists who are whipping up sentiment. We need to go back to the micro of the firm and persuade people by our actions that in fact trust can be restored.”

The issue is a sensitive one, not everyone agreeing corporates should get involved in social and political issues. In Australia, the debate surrounding a “social license to operate” intensified last year, while some corporates were criticised for taking positions on same-sex marriage and reducing the use of plastic.

Many companies are also facing financial pressures in their core operations, including greater competition and elevated investment across technology, regulation and compliance.

These constraints were highlighted by global CEO organisation YPO in Davos last week. Its recent survey of CEOs, including some from Australia and New Zealand, found that while most believe the purpose of business is to have an impact on society beyond pursuit of profits, the biggest obstacles were government regulations, taxation and capital/lack of funding.

Many Australian businesses would likely empathise. 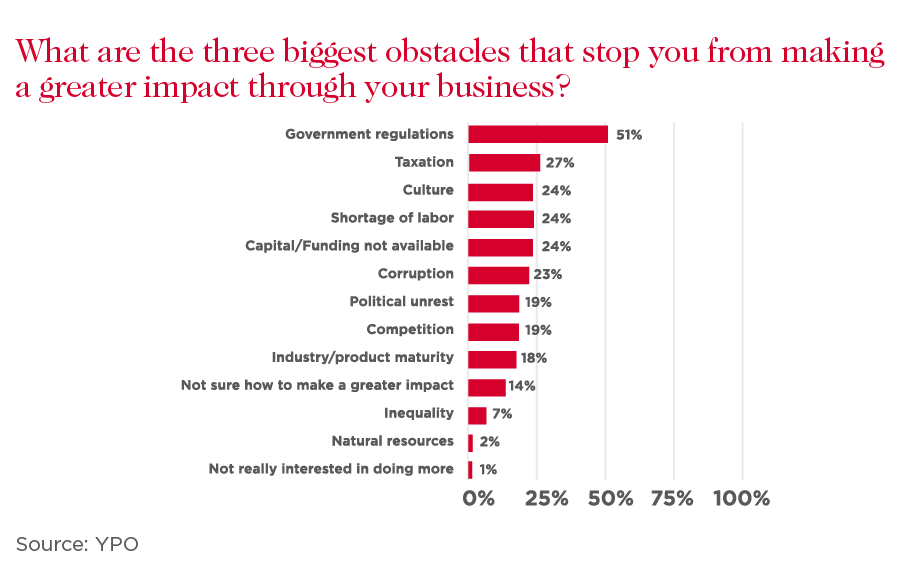 In his final speech of the year in December, Business Council of Australia president Grant King decried the lack of broad-based tax reform in recent times, including not reducing the corporate tax rate to 25 per cent for all companies, and warned excessive regulation limited innovation and growth.

He said the way to get “more for all”, rather than just more for certain parts of society, was economic growth north of 3 per cent, and urged businesses to speak out more on policy.

“Whilst we are all aware of the decline in confidence and trust in business we also know that people understand the important role business plays in creating jobs and employing people. They want to hear from business leaders on the policies and actions needed to help business make Australia a better place,” he said.

In his letter, Fink conceded he feels the pressures of today’s “polarised environment and the challenges of navigating them”, including greater push from stakeholders to get more involved in sensitive social and political issues.

Yet he added it’s unlikely to change as millennials – which already make up  around a third of the workforce – choose what to buy, where to invest and where to work, pointing to the thousands of Google employees who recently walked off the job in protest. Citing a recent Deloitte survey of millennial workers that found 63 percent more said businesses should “improve society” rather than “generate profit”, Fink said “environmental, social, and governance” issues, or ESG, will be increasingly material to how corporates are valued by investors amid the “largest transfer of wealth in history: $US24 trillion from baby boomers to millennials”.

Prior research has shown companies with strong ESG provide higher returns to investors than others.

“As divisions continue to deepen, companies must demonstrate their commitment to the countries, regions, and communities where they operate, particularly on issues central to the world’s future prosperity,” Fink said.

“Companies cannot solve every issue of public importance, but there are many – from retirement to infrastructure to preparing workers for the jobs of the future – that cannot be solved without corporate leadership.”

Leaders leaned into crisis, now it’s about leading out #leadership

Leaders leaned into crisis, now it’s about leading out

‘Slow down to speed up’ in sport – and work #leadership

‘Slow down to speed up’ in sport – and work

Boards can’t get stuck in the forest #leadership

Boards can’t get stuck in the forest