Disruptive collision of change and trust

If it feels like a lot is going on, apparently there is – and it isn’t slowing down.

“Investors should assume an avalanche of unpredictable disruptions and U-turns,” a note this week from Macquarie Wealth Management reads, suggesting many people were wrongly placing too much trust in central banks to only use a handful of known policy tools to support economies and markets in the future.

But this apparent collision of the pace of change and predictability (or lack of) is playing out everywhere, explaining why the issue of trust has rocketed up the priority list inside corporates.

Prior to a speech this week focused on trust by The Financial System Inquiry chairman David Murray, a survey of consumers done in April by branding and consulting group Principals found Uber was deemed Australia’s most disruptive brand ahead of Tesla and Aldi. While that is hardly eye-catching, in fourth position was Afterpay, the youngest “disruptor” in the top 10 that is part of a group of relatively new point of sale finance providers such as Zip, Openpay, PartPay, FuturePay and Ourpay.

“Trust is earned swiftly by quality brands,” the report surmises, adding young brands were driving the “authenticity movement” and the impact of “steady state marketing” had dived drastically.

Of the top 10 perceived disruption leaders, their average age in Australia was just four years, reflecting consumers’ willingness to use – and trust – new offerings, including from relative newbies, rather than just global players like Amazon and Netflix.

Separately, PwC’s annual entertainment and media outlook report predicted ongoing headwinds for mature sub-sectors like newspapers and free to air TV as advertising shifts to the internet. Somewhat ironically, two of the global giants that have scooped up much of today’s advertising flow from incumbent media companies – Google and Facebook – were also among the top 10 companies people viewed as most disruptive in Principals’ branding survey. 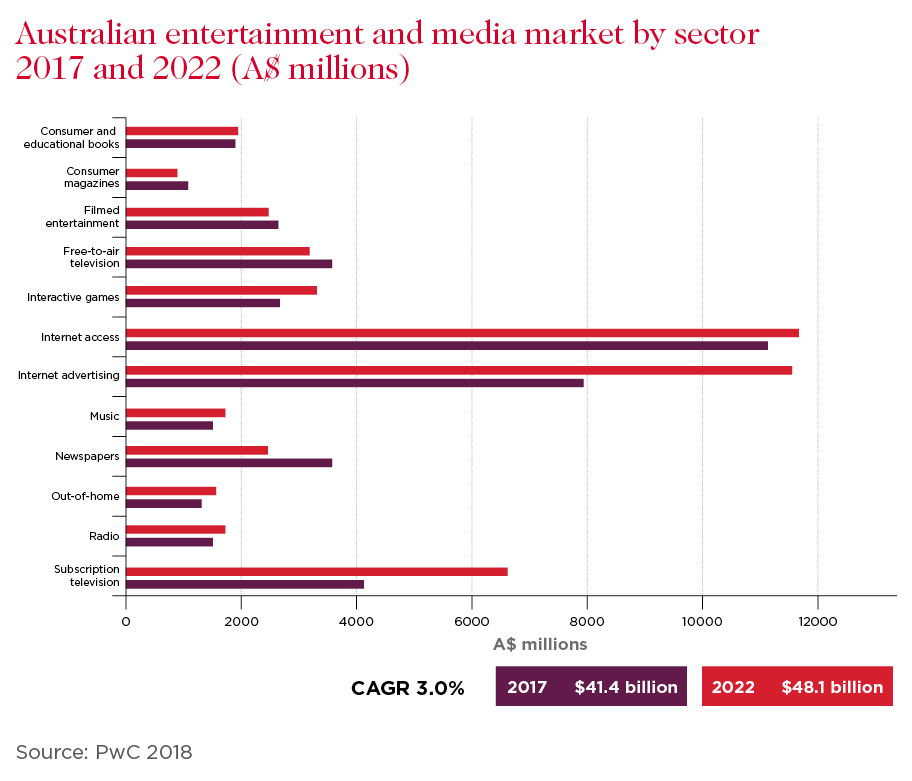 But PwC’s research also included a section dedicated to trust given its rising importance in a more complicated world dominated by daily headlines about Trump and technology, showing gains were being made as highly regarded news outlets seek to leverage the rise of “fake news” to grow audiences and – hopefully – sales. In Australia, PwC found trust in journalism has increased to above 50 per cent from around 43 per cent in 2017 while trust in “platforms” declined to 35 per cent.

That’s no mean feat: Edelman’s global trust barometer this year found media overall – as defined by people as content and platforms – had become the least trusted institution. Yet out of 21 countries, Edelman found platforms were more trusted than journalism in only Turkey, Mexico, Malaysia and Brazil. Clearly, even platforms like Facebook that are viewed as disruptive and innovative are vulnerable to the loss of trust.

But what’s more notable for other industries battling trust issues about the inroad made by several news brands is that parts of the media has done it at the same time as enduring sustained financial pressures. The Australian newspaper market – consumer and advertising spend -- will shrink to $2.4bn from $3.2bn by 2022, while free to air TV goes to $3.1bn from $3.7bn, according to PwC.

“Typically, trust would be seen as a qualifier that supports a business’s or industry’s licence to operate. But a strong case can be made to view and treat trust as a differentiator,” PwC’s global media experts say.

An added difficulty in some cases is differing levels of trust for individual participants and products relative to industries as a whole. The financial services industry, for example, has been navigating this task for some time, Westpac Group chief executive Brian Hartzer calling out the “trust gap” in a September 2016 speech – 18 months before the royal commission commenced. However, research shows trust in individual banks, employees and products – such as deposits – is higher than for the industry.

Mr Murray, the new chairman of AMP, this week argued the commission could help the industry’s trust rebuild. But longer-term, he said looking at internal frameworks that impacted culture was key. “Trust will not be restored until institutions revisit existing governance frameworks that may be inhibiting cultural reform,” he said at an American Chamber of Commerce event in Sydney.

PwC points to the “ACTS Framework” used to understand trust. That is, advocacy, consistency, transparency and success, citing how Facebook founder Mark Zuckerberg used some of its “accumulated reserves” of success to “rebuild its damaged transparency account” following the Cambridge Analytica scandal.  “(This) will be effective if it shows ‘Consistency’,” PwC says.

But in the section on Australia’s internet advertising, which is forecast to expand from $8.7bn in 2017 to $12.7bn in 2022, it also says quality is important in building trust. Once that’s established, publishers can explore fresh ancillary revenue streams.

“Quality content remains the key driver in gaining consumer attention and trust. This connection, once formed, presents opportunities to transition into a host of revenue streams, including branded content, data sales, e-commerce (through affiliate links) and brand licensing,” the report says.

Again, the finding around fresh revenue streams is notable for other industries facing rapid change, new competition and fading legacy pools of income.

Just this week, Telstra announced a revamped strategy that would include the elimination of “up to $500 million in revenues for its services over the next three years, with excess data charges being the first example”. But the telco added that in the long term, “these moves are in the best interests of customers…(and) are expected to be more than offset by more services per customer and lower costs from simplicity and leadership shown by Telstra translating into new sources of growth”.

But whether a telco, bank, social platform or start-up, trust is playing a bigger role in how – and if – long-term success comes through.

“Companies that have trust with everyone they do business with will enjoy a competitive edge over those that don’t – from private individuals to massive corporate business partners,” it says.