The improvement in the government’s fiscal position is pretty spectacular, bringing forward the projected surplus by one year to a $2.2bn positive balance in 2019-20.

In total across the four-year forecast horizon, the budget position has improved by $17bn compared to the mid-year update in December. By 2021-22, the additional year that rolls into the budget period, the surplus is forecast to widen to $16.6bn.

That’s a good outcome and in stark contrast to a few years ago when surpluses were nowhere in sight.

Most of us like a comeback or turnaround story. This one has come through on the back of the collision of several positive forces, including better than expected commodity prices, global output and domestic jobs growth.

Across the four years to 2020-21, the stronger economy boosts the budget by $27.8bn, the bulk of which comes from higher tax receipts. 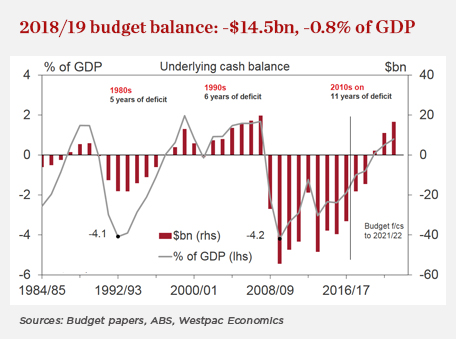 As flagged, the government has now moved to give some of the tax take back via a seven year plan that will cost $13.4bn over four years. This will initially begin with a temporary new Low and Middle Income Tax Offset that will provide a benefit of up to $530 per year. But the tax plan takes time to flow through and there is little change for high income earners in the near-term – which Peter Costello this week noted had been the case for many years.

Other than tax, the government’s primary initiatives were to improve health and aged care, and continued investment in infrastructure, such as $24.5bn on new transport projects. But much of this is “off balance sheet” spending through the creation of corporate entities. In terms of savings measures, much is focused around enforcing tax compliance and the black economy including a crackdown on illicit tobacco slated to raise $3.6bn over four years.

These measures are not insignificant and make sense ahead of a looming election given by not causing serious friction with the electorate. But they may prove ambitious. 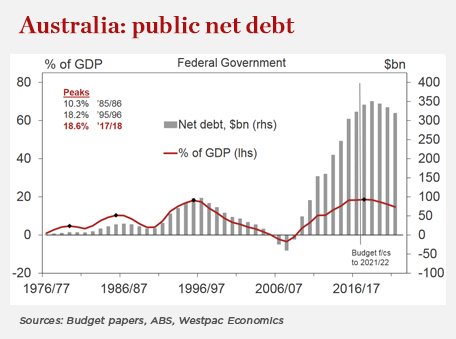 In regards to the deficit and surplus projections, one of the key variables, the iron ore price, is forecast to decline to $US55 a tonne by December, in line with Westpac Economics’ expectations. As for the economics forecasts, while we are reasonably comfortable with the near term real growth forecasts, the assumptions around wages and inflation appear overly optimistic. The underlying assumption on which the long term projections are based is also questionable – that is that growth will lift to above trend in 2018-19 and hold there until 2024-25.

Our growth forecasts are about in line with Treasury’s in 2017-18. However, the budget predicts real GDP growth of 3 per cent in 2018-19 – below the Reserve Bank’s forecast of 3.25 per cent but above our expectation of 2.5 per cent.

For us, the biggest headwind is consumption amid a slowing housing market and weak wages growth, which in turn holds back businesses from investing due to concerns around demand. Just this week, the March retail report showed a disappointing lower than expected 0.2 per cent rise in the first quarter of calendar 2018, reflecting subdued consumer spending. 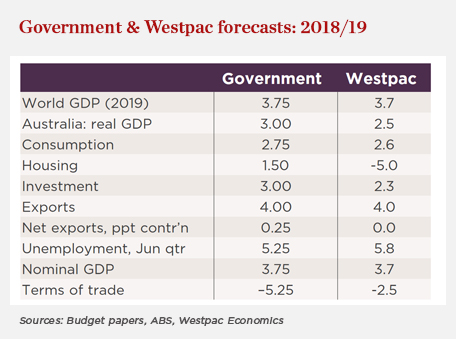 It’s a stretch to describe this budget as ultra “business friendly” – while it lacks the surprise revenue raising measures of last year like the bank levy, the major savings are based around tightening up on compliance and the black economy. Upcoming state and federal elections may also weigh on confidence, while the global economy looks to have peaked at the end of last year.

In addition, much of last year’s strong jobs growth was in lower paying jobs, for example the health and education sectors, which is reflected in several spending priorities of the budget. There are also risks that the jobs boom in the construction sector eases off.

The near-term income tax relief up to around $10 a week from the government’s seven-year plan is unlikely to offset these headwinds to consumption.

Much attention will now turn to Labor’s budget reply and the coming months for how it plans to deploy potentially $180bn of spending it has to play with over 10 years from various policy measures already announced.

Overall, while our near-term views on “nominal” income are similar, the government's growth outlook is more upbeat than Westpac Economics given more constructive views on consumer demand, dwelling investment and mining, plus an associated lift in wages growth to 3.25 per cent in 2019-20. That’s the year our forecasts highlight some significant vulnerabilities, and the consumer and wages will be the key things to watch.

To watch more from Westpac's economists on the Federal Budget, visit Westpac IQ.