The 45th Federal Parliament has been active for almost two years and yet we are still debating tax reform at the margins with neither major party driving a discussion about serious holistic reform.

It’s an issue that may be seen by some as a dry topic, but unlike most policy issues, it has the potential to impact almost all aspects of our lives.

Taxes, in addition to funding government services, help us decide what we buy, and partly dictate what we can afford. They influence where we live and how we structure our working lives.

Ever since the Australian government announced their Enterprise Tax Plan in the 2016/17 budget there has been a debate raging here about company tax cuts. When President Donald Trump got his large cut to company tax through the US Congress at the end of last year, this vigorous debate has only intensified.

At the Australian Institute of Company Directors (AICD) we have always felt that equating tax reform with just a cut to company tax rate is far too simplistic. The AICD’s position has been to push for whole-of-system reform, rather than the piecemeal approach we have seen to date, no matter how worthy those individual steps are.

What we need is what then Treasury Secretary Dr Ken Henry attempted eight years ago with his review of the whole tax system, though even Dr Henry was constrained when the terms of references of his inquiry effectively ruled out changes to the GST. (Despite this, the Henry review recommended that the GST be abolished, and be replaced by a broad based cash consumption tax).

The AICD’s view is that no review of Australia’s complex tax system is complete without examination of the GST – its rate, breadth and the distribution of proceeds. Including the GST, along with income tax reform and an examination of all other taxes, is the only way we are going to come up with lasting solutions to many policy problems.

Along with the policy merits of a holistic tax reform, this approach is one which allows business to argue in the national interest, avoiding claims of self-interest.

Edelman’s Global Trust Barometer found Australians' trust in business dropped from 48 per cent to 45 per cent over the past year. At a time when there are all-time low wage increases, people are hurting from high energy prices and other costs of living are rising, the business community needs to have a conversation with the community about a whole range of issues, including tax reform. We cannot afford to focus just on one aspect of tax that can very easily be seen as a classic case of self-interest.

The AICD is not against company tax cuts. We welcome the government’s reduced company tax burden for smaller businesses, which already has been legislated, and the plans to lower the impost for larger business. But this cannot be the end of the discussion.

Until we face up to the broader problem facing Australia, any “win” for businesses, like a company tax cut, could just as easily be reduced by another ill-conceived levy imposed by any government, like what the large banks saw on budget night last year.

This also applies to the benefits of any cut to personal income taxes, like those mooted for this year’s budget. A reduction to your income tax is all well and good, but the effects are reduced by planned tax increases, like the proposed rise in the Medicare levy from July 1 to help fund the National Disability Insurance Scheme.

What Australia needs is meaningful change in terms of improving our fiscal sustainability. 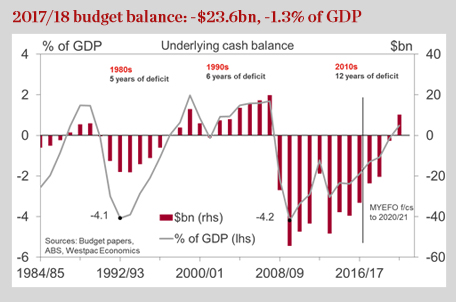 To its credit, the government has made some progress towards repairing the nation’s persistent annual shortfall. This has been helped by a better performance from the domestic economy, which has lifted tax collections, particularly company tax receipts.

At best, these are business as usual fixes to a long-term structural problem.

What the situation calls for is holistic changes to our tax system, which will in the end help people and companies earn more.

Company tax cuts will be one factor in this, but they are not a panacea to all of Australia’s economic woes. If we really want to deal with the problems facing our companies, and our communities, then wholesale reform of the tax system is the only place to start.

The views expressed in this article are those of the author and do not necessarily reflect those of Westpac Group.