Some context on bank returns is critical

Imagine a company with a large asset base and high customer satisfaction, but relatively standard profitability.

You may not have instantly pictured a bank. But that’s the reality.

Yes, the big four’s absolute profits are large at more than $30 billion last year, reflecting strong efficiency and significant size – the debate often fails to discuss the trillions of dollars of assets and liabilities on balance sheets.

Nor is it often mentioned that the return on those assets is actually low at around 1 per cent. Often, discussion around profitability instead centres on the major banks’ return on equity. But again, equity brokers forecast major banks’ ROE of 12.5 per cent, which is actually not supersized relative to the broader market and below many other industries such as telecommunications, healthcare and information technology. In other functioning banking systems like Sweden, Norway and Canada, banks report similar ROEs. Elsewhere, where ROEs are lower, it’s typically because the GFC took a bigger toll partly due to an overemphasis on growth and competition that ended up creating more risk. 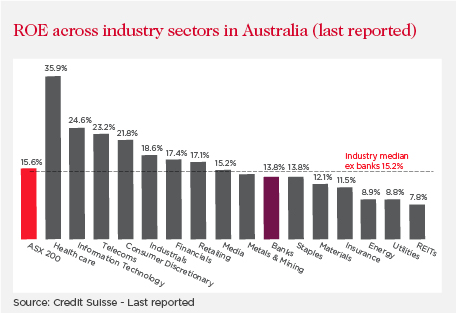 In the past decade, Westpac’s ROE has slid around 40 per cent as competition impacted margins, higher capital requirements drove deleveraging, Westpac and St.George merged, and compliance costs increased.

So we disagree with the assertion that the profits of Australia’s major banks are unreasonably high, as implied by the Productivity Commission’s (PC’s) draft report into Competition in the Australian Financial System.

And we further argue that focusing purely on the dollar amount of profits risks undermining the essential role the major banks play in importing capital to fund the Australian economy.

Australia imports more than it exports, and therefore requires capital from overseas to fund the difference. Westpac for example imports $150 billion of wholesale funding, the equivalent of 300,000 home loans. Australia’s funding gap is sourced in large part by the big banks in offshore wholesale debt markets. Those offshore investors have choices as to where they invest, and they will only provide capital to banks whose capital levels and profitability provide enough of a cushion to ensure they will get their money back.

Closer to home, our equity investors in Australia too require a certain return for the risk they are taking. That’s why all companies, not just banks, must target an ROE above their cost of capital. Anything below destroys value. 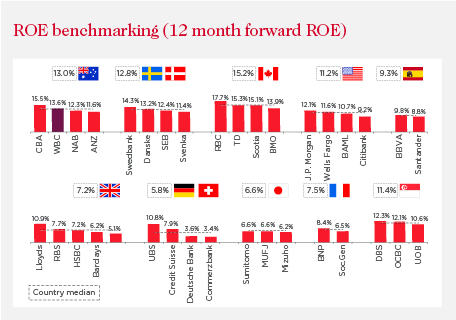 While estimates vary, the cost of capital for Australia’s major banks is thought to be around 9.5-11 per cent, a few percentage points below ROE. That buffer is required due to the “cyclicality” of bank earnings and the need to meet the new “unquestionably strong” regulations. Bank profits are tied to economic cycles – they can fall during times of stress and rise during periods of strength. To smooth this out, banks need to generate a return to build capital for the tougher times. It also helps pay dividends to hundreds of thousands of Australians and support lending to businesses and households through the cycle, not just in the good times.

This ties into an important point not missed by others such as David Murray – that competition and financial stability are inextricably tied. The GFC was a stark reminder that when stability and competition settings are misaligned the cost to economies, and everyday people, can be large when things turn south.

Overseen by robust regulators, Australia has for the most part benefited from a stable financial system that is competitive and well-calibrated. Strength has only increased – along with higher capital levels, banks have materially strengthened their funding profiles, in turn driving intense competition for customer deposits.

Since the GFC, term deposit spreads, for example, have risen from around 45 basis points below the equivalent swap rate to around 80 basis points above last year. Deposits are the core funding source for Australia’s big banks, and it’s notable that intense competition for deposits was not called out by the PC’s draft report.

We also dispute the assertion that the New Payments Platform should do more to ease customer switching, noting it has only just launched and more time is warranted to become established before considering any costly and complex changes.

Where we agree with the PC’s report is the difficulty for consumers in making sense of the greater choice in banking than ever before, from the nearly 4000 different mortgages to the more than 100 different providers. Westpac’s service revolution strategy acknowledges that we are a service business, not a product business, committed to making our customers’ lives easier and providing world class service. However, this shift can create complexity at times as customers pay for a service provided by people, not merely products. At the same time, higher regulatory costs have pushed up banks’ fixed cost bases amid rising competition globally.

But it’s not clear more competitors necessarily mean more competition in an economy already well served by many varied participants. We compete with multiple large banks, regional banks, small banks, credit unions, non-banks, as well as fintech companies and global technology platforms, driving down the major banks’ net interest margins over time while also increasing innovation. Barriers to entry are arguably falling as the government focuses on several competition reforms. We also support the move toward an open data regime to facilitate more informed decision making and promote innovation and efficiency in the financial system in the long-term.

We believe in competition. It’s good for customers, the financial system, and the big banks themselves. But it’s equally important to recognise the competitive environment in which we operate alongside the value that strong, profitable banks play in underpinning the economy in the long run, through good times and bad.

Peter was appointed Westpac Group Chief Executive Officer in April 2020. Peter previously held this role on an acting basis between December 2019 and March 2020. Prior to this, he was Chief Financial Officer since April 2014, with responsibility for Westpac's finance, group audit, tax, treasury and investor relations functions, following three years as Deputy CFO. Since joining Westpac in 1994, Peter has held senior finance positions across the Group, including in Group Finance, Business and Consumer Banking, Business and Technology Services, Treasury and Financial Markets. He commenced his career at Deloitte Touche Tohmatsu.