In some ways the Australian people are the most enterprising on earth.  Both manufacturing and craftsmanship flourished early on our island continent. I think that our resilient and self-reliant national character was forged largely as a consequence of how our modern nation evolved.

Today of course we live in a very different world; a broad range of manufactured goods are imported. But this doesn’t mean that we have lost our entrepreneurial spirit; it’s more that our newest businesses are more likely to be in the services field than in manufacturing. This shift is very much evident from new data released from the 2016 Census, as discussed later.

Regardless of whether Australia’s entrepreneurial spirit derives from factories or from farms, or indeed from modern-day offices, the fact is that in a fast moving and disruptive world, we need to increasingly create and nurture the kind of businesses that are able to provide prosperity to all Australians; and this is where Westpac’s Businesses of Tomorrow can play a vital role.

Skills are one part of the equation of a future Australia but so too is the eternal quest that drives the entrepreneurial spirit to create the businesses of tomorrow.

Every month the Australian Bureau of Statistics publishes estimates of employment and unemployment across the Australian workforce. This dataset breaks down survey results into 19 sectors, with health and education generally being winners and manufacturing and agriculture generally being losers.  But once every five years via the Census it’s possible to get a more granular insight into the growing parts of the economy.

Imagine being able to measure the performance of not only 19 sectors of the economy, but of 500 sectors. Here is a powerful lens through which might be seen the specific industries that are right now delivering jobs and prosperity and that therefore must surely be breeding grounds for the businesses of tomorrow. 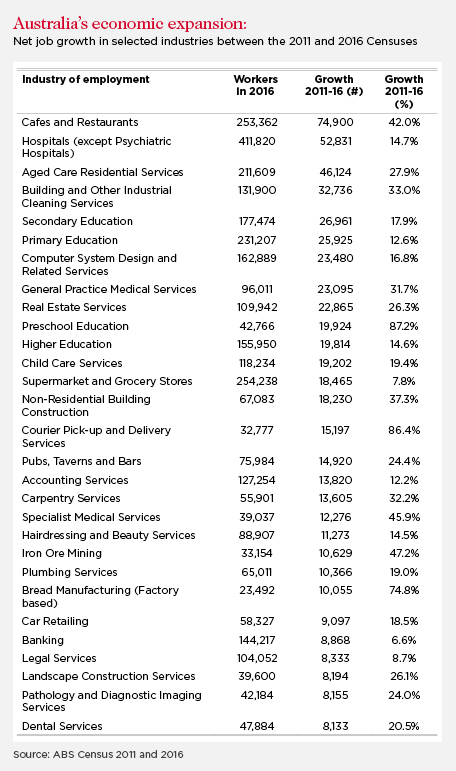 Those parts of the economy that have expanded most since the peak of the mining boom are associated with the delivery of lifestyle, health care and/or education services, or indeed are vital parts of the digital transformation of the Australian economy.

These sectors are the building blocks of change in our economy. There is of course even more job growth across a range of smaller, niche, industries in Australia.  The number of workers working in vegetable growing (under cover, e.g. hot house) more than doubled from 259 in 2011 to 746 in 2016.  There was similar growth in data processing and web hosting services up from 1,223 workers in 2011 to 4,338 workers in 2016.

The number of people working in preschool education also almost doubled from 23,000 to 43,000 over these years. The common denominator that emerges from these examples is the quite detailed articulation of the Australian workforce and of the business landscape that it supports.

Big-picture shifts like high levels of immigration that drive demand for more teachers and schools, also drive demand for new businesses in, say, education training, cleaning and security services.  Other megatrends are creating business opportunities in the café and restaurant sector.  Many young Australians are for example delaying commitment to marriage and mortgage, the community has adopted European lifestyle preferences such as alfresco dining, and with more women than ever in the workforce, there is more discretionary spending which is being channelled into lifestyle services, like cafes and restaurants.

Not only do these megatrends stimulate demand for more cafes and restaurants but also for contract staffing, for catering supplies services, for commercial fit-out services, for specialised food review and often in new social media mediums (e.g. Broadsheet).  And also for more specialised and year-round vegetables that might prompt enterprising growers, for example, to increasingly grow product under cover in a hot house.

There are often common denominators that drive both the growing and the contracting parts of the economy and which impact on business. On the one hand there are the megatrends as outlined above. But there are also quite specific demographic characteristics that are often present in high-growth industries.

For example, drawing on recently released census results it is evident that the business of bee-keeping is not only growing (jobs up 27 per cent since 2011) but it is also one of the biggest employers of the over-60 workforce (31 per cent, or three times the national average).  Maybe the business of bee-keeping will grow further as Baby Boomer push into their 60s and beyond?

In other parts of the economy it is evident that age-group is a driver of new business opportunity.  In computer system design and related services the 2016 workforce of 163,000 increased at an average rate of between 3 per cent and 4 per cent per year over the preceding five years.  This new-economy workforce is dominated by Millennial workers aged in their early 30s (see chart). 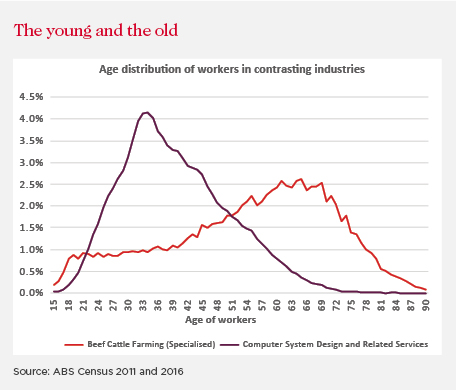 But in another industry, beef cattle farming for example, the experience and the outlook is different.  There was no real change in the workforce between 2011 and 2016 – it hovered around the 44,000-45,000 mark – suggesting that this industry is well established.  There might be some opportunity to streamline operations but essentially the business of beef cattle farming is relatively stable. However this industry is dominated by Baby Boomers aged in their 60s and who are likely to be concerned about issues of succession planning, inheritance and/or exit strategies.

On the one hand it is evident that there are burgeoning business opportunities in computer system design and especially for tech-savvy entrepreneurial Millennials looking for a start-up.  But there is also likely to be business opportunity in helping Baby-Boomer farmers find exit strategies for their beef-cattle and other farming activities. Often the problem is that the next generation isn’t keen on ‘the farm’ and/or has developed skills off the farm (e.g. in computer system design), and so other solutions need to be found, such as the corporatisation of Australian farming.

Successful businesses of tomorrow will not always surface in what some might be viewed as the glamour hi-tech city-based start-up sector. In fact, I suspect that many of Australia’s businesses of tomorrow will prosper amid the sunshine of megatrends such as strong population growth, of emerging lifestyles and new consumer-preferences, and of the digital transformation of the economy.

Bernard Salt is an advocate for Westpac’s Businesses of Tomorrow program. Businesses can apply for the 2018 program from 11 February to 8 April 2018.

Bernard Salt is widely regarded as one of Australia’s leading social commentators by business, the media and the broader community. Bernard heads The Demographics Group which provides specialist advice on demographic, consumer and social trends for business.