NDIS underway – where are the tech innovators?

As the colossal transformation in Australia’s disability care sector starts to take hold, the traditional service model is being turned on its head in a massive shakeup that’s also creating opportunities for new innovative players.

“It’s hard to fathom how big the change is, and how many sections of the community it touches,” Jordan O’Reilly, chief executive of disability support business Hireup, says of the $22 billion National Disability Insurance Scheme. “It’s no wonder such a massive transformation is experiencing teething problems,” adds O’Reilly, who has a personal connection to the issues after his younger brother Shane – who lived with cerebral palsy – was failed by the old system.

O’Reilly is not alone in his views: despite new sector entrants emerging, operators say that until the scheme matures and service providers begin to keep pace with the rapidly growing demand for more – and more innovative – services, it will be challenging to realise the “ground-breaking” changes promised by the NDIS.

Indeed, a recent report by peak body National Disability Services found 57 per cent of service providers predict they will not be able to meet demand in 2018; the same amount are experiencing difficulty recruiting support workers; and many were worried about their financial position with one in four operating at a loss.

“It’s no good changing the way we fund people if, when they walk out of their planning meeting, all they have is the same old service providers and options on the table,” says O’Reilly.

At its core, the NDIS – commonly billed as “the largest social and political reform since Medicare” – aims to hand people with disability more control than ever before. It’s a move away from the traditional block-funded welfare model of support, to a “customer-centred” approach where people with disability have individual plans, funding packages and the choice to “self-direct” their care.

But according to the Productivity Commission’s October report into the NDIS, the “quality, quantity and responsiveness” of disability service providers is not growing quickly enough, and neither is the care workforce. It estimates 70,000 additional workers – or 20 per cent of all new jobs – will be needed in disability care by 2020.

Eighteen months into the transition, the NDIS has been rolled out to almost 120,000 of the estimated 475,000 eligible participants. While doubts have emerged about the rollout timelines, there remains broad sector-wide agreement that “if implemented well, it will substantially improve the wellbeing of people with disability”, according to Social Policy Commissioner Richard Spencer. 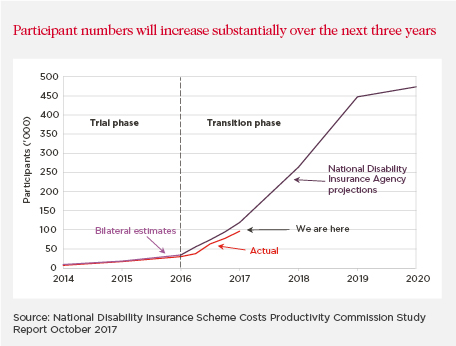 In addition to O’Reilly’s Hireup, other technology-enabled entrants inspired by the new “person-centred” philosophy of the NDIS include Clickability – a self-described “TripAdvisor” of disability services; HIT 100, which provides home-delivered meals and dietician coaching tailored to people with disability; and LanternPay, an online payment solution to transact self-directed care payments.

While these “pockets of innovation” are leading the sector in the right direction – and the number of approved NDIS providers has tripled in the past 12 months to more than 10,500 – O’Reilly says far more progress is needed to improve services for the estimated 4.3 million people living with disability in Australia. Areas particularly ripe for disruption, he says, are those in which Australia ranks poorly compared to other developed nations, such as employment.

“You only have to look across the sector to see the challenges that people with disability face – across education, employment, transport, supported accommodation where wait-lists can be up to a decade,” he says.

Hireup, which was founded by O’Reilly and his sister Laura, and recently topped Deloitte’s Tech Fast 50 for 2017, “matches” people with support workers with the right skills and interests. Its community of registered users has grown rapidly to more than 18,000 since its 2015 launch – made up of around 10,000 support workers and 8000 people seeking services.

Hireup’s model, explains O’Reilly, means support workers are paid more while costs are brought down for people seeking support. “We're about $10 cheaper than our closest traditional competitors. Support workers are employees – not contractors. We pay industry leading wages, super, tax and the wrap around comprehensive insurance,” he says. “It proves you can create employment through peer to peer platforms, but you can also treat the workers really well, while driving massive costs savings for the end-users.”

Clickability co-founder and former social worker Aviva Beecher Kelk predicts it could be up to 10 years before the NDIS reforms are mature enough to truly improve disability care service levels, although she’s seeing “creative ideas” emerge.

"In theory, it’s simple. In practice, it’s incredibly complex – culturally and systemically,” she says. "It's really hard to be creative and think about innovation and quality assurance when you're worried about cash flow for the first time. Many service providers are not yet ready…for innovation. The conversation at the moment is all about how hard the system is and how it’s not working.”

She says a barrier has been the paternalistic view towards people with disability that’s been entrenched in the sector over decades. Expectations will only change, she says, as new service standards, competition, accountability and transparency emerges, which was the spark for Clickability, a disability service directory that features ratings and reviews from people.

O’Reilly says successful organisations coming into the sector will be those that engage well with the community to understand the challenges and find productive solutions, rather than those with no knowledge of the sector.

“We built the Hireup platform by listening and co-designing with our community, who said we fundamentally want to take more control in the day to day relationships we have with our workers,” he says.

“Anyone coming into the sector, with good ideas and the resources to make it happen, needs to take a collaborative approach with people with lived experience in disability and the people who support them. The more of that we can foster the more solutions I think we'll start to see emerging.”