A fish by any other name

When the Northern Territory’s farmed barramundi industry started in 1993, production was impressively low, at just six kilograms of fish a week.

Now that same pioneering farm, Humpty Doo Barramundi on the Adelaide River between Darwin and Kakadu National Park, is producing 40 tonnes a week and is heading towards 50 tonnes.

In 2017, the operation, founded by agricultural scientist Bob Richards, is aiming to produce 2000 tonnes of fish, continuing an expansion that began five years ago and which has seen Humpty Doo Barramundi grow fivefold—and there’s still has plenty of room to grow into its full production potential of 12,000 tonnes a year.

Humpty Doo Barramundi is Australia’s largest barramundi farm, and the world’s second largest, responsible for about 28 per cent of the roughly 6500 tonnes of farmed barra now produced here annually. Its recent expansion is emblematic of a small sector that is now taking on the structure of the larger farmed finfish industries. In doing so, it’s ensuring that the bar is raised ever higher for new entrants.

Once, says Dan Richards, son of Humpty Doo’s founder, a family could survive on a farm that produced 20 tonnes of barra per year. “Now anyone with less than 300 tonnes is struggling or out of the game.”

The economics of success have played a big part. When Bob Richards started the Humpty Doo farm, wading through mud carrying jerry cans of fuel to pumps, there was a sizeable margin between the cost of fish feed and the price he got for fish. The growth in aquaculture has changed the equation.

“In the past 25 years the price of fish has come down in actual dollar terms, let alone if you take into account inflation, and the cost of feed is three to four times higher,” says Dan Richards, who also sits on the board of the Northern Territory Seafood Council. Those shrinking margins must be overcome by increasingly larger investments in technology and scale. As a result, smaller players in Australia’s farmed barra sector are being squeezed out by changing economics, which are also pushing up the barriers to entry. 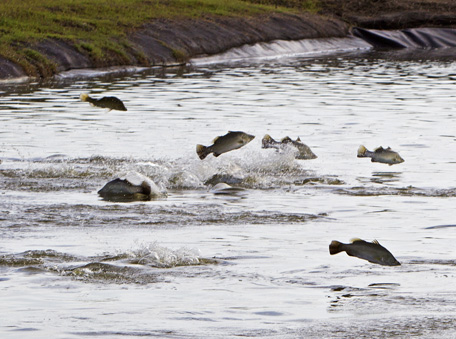 “If you look at the salmon industry, it’s gone from 40 players down to three, and it might end up being two. Something similar is happening in the barramundi sector, so I don’t think we’re going to ever see a proliferation of domestic players again,” Richards says.

Barramundi still occupy a relatively small niche in the farmed finfish industries. According to ABARES’ 2014–15 figures, the latest available, the value of salmonid production in that year was $631 million and tuna production was valued at $131 million, while barramundi came in third at $37 million. Farmed barra only represented six per cent of finfish production by volume in the same year, suggesting high value on a per-kilo basis.

Richards says that some sizeable investments have been made in barra production capability across the industry over the past two years, but the industry’s challenge lies in growing the market.

Despite Australia’s homegrown advantage—barramundi is a native fish, with an Aboriginal name—the local industry has an uphill battle breaking out of the domestic market into exports. The problem is cost, which is the primary driver of consumer spending.

About 60 per cent of the 20,000 tonnes of barramundi eaten in Australia each year arrives as cheap farmed imports from countries such as Vietnam and China.

Australian barra farmers export a small amount of fish back to Asia, where it is bought by safety-conscious affluent consumers, but the local industry largely relies on local consumers to buy its relatively high-cost product. That might change, Richards believes, if barramundi could be differentiated as a distinctively Australian product. It may surprise Australians that it is not already, but in Asia the species carries names like ‘Asian sea bass’.

The local industry believes barramundi should be firmly linked to terroir, “like champagne or Parma ham,” Richards says. The mission to make it so resides with the Australian Fish Names Committee, whose objective is “one fish, one name”.

Richards doesn’t see a universal name becoming standard any time soon, so he believes the industry needs to differentiate on other attributes, such as freshness and quality, food safety, ethical employment of regional Australians and disease-free status that enables antibiotic-free production.

“The broader seafood industry is pushing for country-of-origin labelling in restaurants to enable consumers to make the choice,” Richards says. “This is legislation that is sorely lacking in all but the Northern Territory.”

“Meanwhile, we’ve got this great environment here, and a great species, and an iconic place in the Australian psyche. I think what we’ve done at Humpty Doo over the past 25 years is hopefully just a start.”

This article first appeared in the winter edition of Westpac Agribusiness' Produce Magazine.

The views expressed are those of the authors and do not reflect the Westpac Group.

Matthew grew up amid 6000 Santa Gertrudis on an AACo cattle property managed by his father in south-west Western Australia. On leaving school he roamed around rural Australia for six years, working in a variety of roles, before moving into journalism via the Kalgoorlie Miner newspaper. During 25 years as a journalist, Matt has worked for a range of publications in Australia and overseas, including 15 years writing about agriculture for Rural Press/Fairfax, winning him several awards.