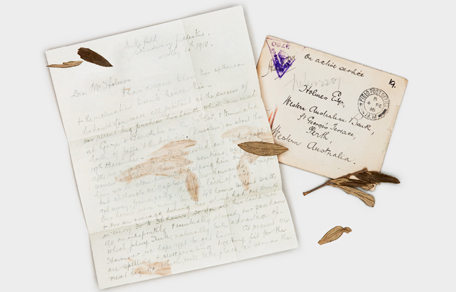 This letter from Alan Love – a bank officer from Mount Lawley who served with the 10th Light Horse Regiment in Palestine – to General Manager Henry D. Holmes, contains vivid descriptions of the action around Gaza and Beersheba in 1917 and a sprig of olive leaves. (Westpac Group archives) The Jerilderie branch ledger noting details of the 1879 robbery by the Kelly gang (Westpac Group archives), with photograph of Ned Kelly, c.1880 (Collection of State Library of Victoria).