MONEY TALK: The rise of the retail traders

Much of the breathless coverage about US stock GameStop centred around novice investors turning modest investments into massive gains after they outfoxed the Wall Street professionals.

That all made good copy.

But it’s gone somewhat quieter since the “short squeeze” ended and the share price, which had spiked up to $US483 in late January, sagged back to double digit territory – possibly taking a lot of retail investors down with it as fast as gains were made on the way up.

“And what the GameStop drama did was get share investing discussed far more widely again,” he says.

“Lots of people who had previously expressed no interest in the share market have suddenly started talking about it. And what we’ve noticed is that investors are looking at the kind of technology stocks that they can see and touch, that are critical parts of their daily lives.

“In Australia that means stocks like AfterPay and Zip, both of whose prices have had a strong move up.”

With interest rates at historic lows, lofty asset prices and few signs central banks are about to take their foot off the pedal any time soon, experts say the prospects of windfall gains from several asset classes has dimmed. The equities market has been a major winner because the yield on offer beats term deposits and investors may reap simultaneous capital gains. Industry insiders even have a new name for it – “TINA” (there is no alternative). Another area attracting increasing interest has been cryptocurrencies, particularly bitcoin as its price hits fresh highs.

According to broker Morgan Stanley, 2020 saw a 50 per cent increase in the share of volume on the stock market coming from the “online retail” cohort, peaking at 10 per cent of market volume in July. And that doesn’t include retail investors trading via financial advisers.

“The trend has continued into 2021,” the broker’s strategists wrote in a note this month. 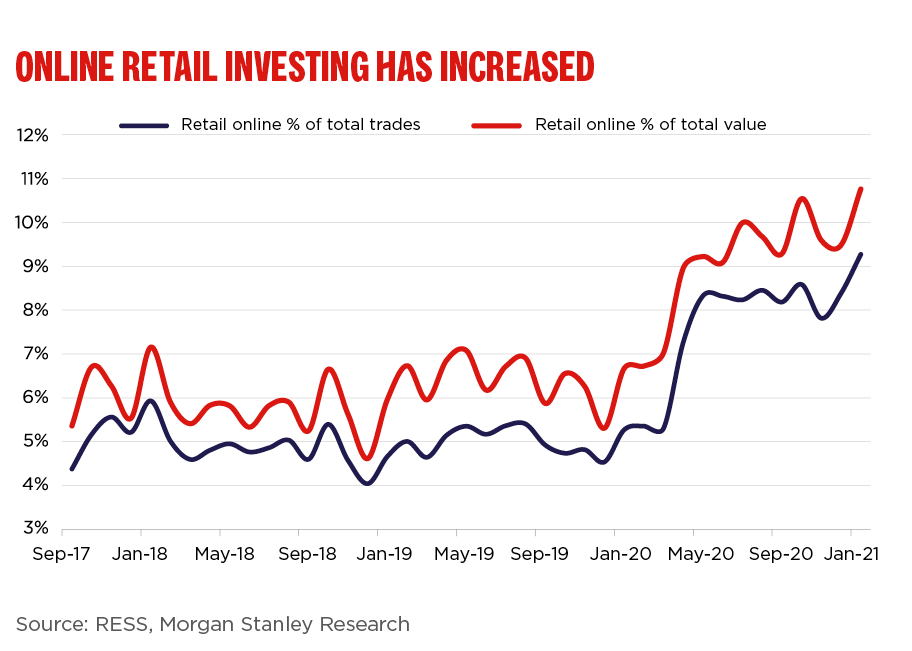 Australians haven’t been alone in being drawn to the stockmarket at a time of travel restrictions, and record government and central bank stimulus. In the US, free trading platform Robinhood added millions of users last year and reportedly generated more than 600,000 app downloads in one day alone in the lead up to the Super Bowl.

It’s also not the first time retail investors have given shares a red hot go.

In September, the ASX and Investment Trends released a survey on retail investors conducted in January and May 2020, finding 6.6 million Australians, or 35 per cent, held ASX-listed or quoted investments – lower than the peak in 2004 of 44 per cent as the mining boom revved up.

“Looking beyond the impact of the COVID-19 crisis, the future of Australian retail investing looks promising,” Investment Trends chief Michael Blomfield said at the time.

“The last few years have seen a large influx of new investors, with more set to enter the market. Many are younger Australians, including a growing number of young women, seeking to create the foundations for financial security with years of investing ahead of them.”

In a recent piece on Livewire Markets, he said while the GameStop drama was a “spectacular occurrence and reflects the democratisation of access to information and to markets, facilitated by the internet” (similar to bitcoin), there was a risk of following the herd and investors – including newly emboldened young people – taking on more risk than realised.

“The effect of cheap money and government handouts is now shifting the willingness of the ordinary punter to have a go,” he wrote.

“These are interesting and dangerous times when risk is regarded as a game.”