As a former derivatives trader and banker, Jan Swinhoe was no stranger to financial markets.

Mulling an opportunity five years ago to invest in a “social benefit bond”, she was alert to the higher risk in allocating some of her family foundation’s capital into a new type of debt security, designed to raise private funding to reduce children entering out of home care and deliver government cost savings.

While supportive of the purpose and the bond offering a healthy return, the deal was the first of its kind and far from a vanilla investment grade offering of corporate or government bonds.

But Ms Swinhoe took comfort in the disclosure and process around key performance indicators and how outcomes would be measured, ingredients she says are important for the nascent market to continue to grow.

“The social benefit bond had a whole level of discipline around how it was structured and how it would operate and you really have to have confidence -- we weren’t going in there with a view that we were going to lose money,” she says.

“But this is the best outcome for everybody – if you can actually get a reasonable return, 6 per cent is a very healthy return in the current environment, and that money goes towards social purpose.

“With any market, if it performs well -- and this bond performed very well at both levels -- then that gives investors more confidence to go into a similar thing again.”

Five years after being launched by The Benevolent Society, Westpac, Commonwealth Bank and the NSW government, raising $10 million, the bond matured last month with results the charity described as “incredible”. The “Resilient Families” program funded by the bond resulted in 32 per cent fewer children entering out of home care than those in a separate control group of families. Overall, 86 per cent of the 303 families that accessed the program remained intact following the “intensive, long-term, in-home support”.

Investors were repaid their principal, plus a compound annual return of 6 per cent for those in the “protected class” of bonds – where repayment was guaranteed – while those who bought the riskier subordinated tranche of the deal with greater exposure to the outcomes from the Resilient Families program received a 10.5 per cent return.

As The Benevolent Society assess rolling out the program in other states, Westpac executive director, structured finance, Craig Parker notes that other social benefit bonds have been issued in recent years and there was an opportunity to continue working with governments and community service providers to expand the market of innovative securities helping to address pressing social needs.

Sustainable and socially responsible investing has surged in recent years amid an increasing focus on environmental, social and governance (ESG), ethical and impact approaches and changing community expectations.

Impact investments alone have quadrupled since 2015 to $5.8 billion at the end of 2017 driven mostly by the rise of green bonds, but also strong growth in other products including social impact bonds, private debt to social enterprises and investments in property, according to The Responsible Investment Association Australasia. 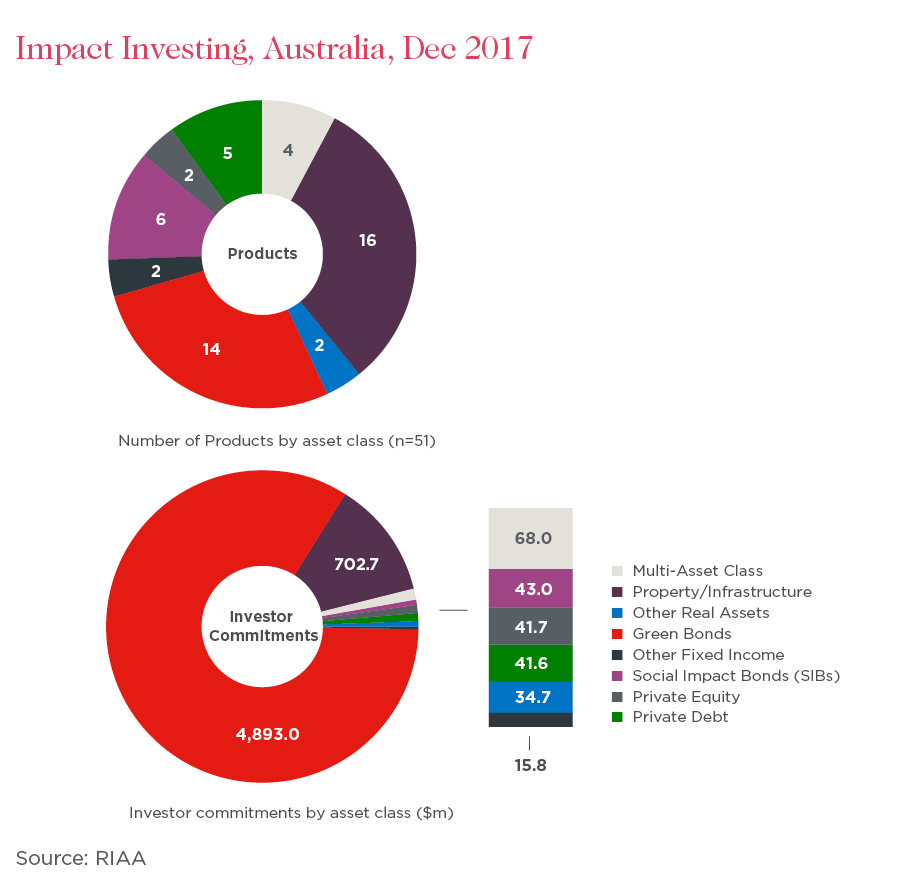 Overall, responsible investments made up $866bn, or 55.5 per cent, of total assets professionally managed in Australia as at December 2017, up 39 per cent on 2016 levels. “Investors have a growing appetite for products that deliver measurable social and environment impacts alongside financial returns,” RIAA’s 2018 benchmark report said.

In a new deal, The World Bank this month partnered with Westpac and BNP Paribas to launch the first “sustainable growth” bonds for Australian investors, supporting the financing of projects that aim to address goals such as ending poverty.

Westpac this month also unveiled the world’s first “green tailored deposit” to be certified by the internationally recognised Climate Bonds Initiative, linking the deposits to defined assets or projects including renewable energy, low carbon transport and low carbon buildings. The City of Sydney Council and the New South Wales Central Coast Council were named as the first investors in the deposit.

Ms Swinhoe, who previously worked in Westpac’s institutional bank, says markets for relatively new types of securities like social benefit bonds will develop over time as the private, public and not for profit sectors work more closely together and understanding grows, citing the rise of the more mature green bond market. Experts estimate between $100m-$150m of social benefit bonds have been issued since the Benevolent Society deal, and that investors are keen for more opportunities in the future.

“The people in the for-purpose sector have the need, but don’t necessarily have the structuring and banking skills, so you need to get the two to marry up, sometimes with some government intervention, because it’s not as straightforward as doing a corporate bond issue, for example.

“You’re not just measuring profitability or sales or things a company would measure, it is complex to actually get measurements...and even securities like green bonds, for example, you can measure carbon emissions or other scientific metrics. But I’m very optimistic about the market growing in the future.”