The Australian profit reporting season – the seasonal avalanche of results from hundreds of listed companies – has passed with the usual blur of Powerpoint presentations and a generous dollop of rhetoric as corporate leaders attempt to portray their numbers in the best possible light.

As usual, expert opinions differ on the strength or otherwise of the individual results – and much depends on what investors expected in the first place.

But while the sharemarket rarely moves in sync with the underlying economy, what did the results tell us about “real world” conditions?

Overall, the key domestic-focused companies affirmed the major economic signals that suggest we’re merely trundling along, with conditions somewhere between terrific and terrible. Even their often conservative outlook statements suggest a notable dearth of mirth.

“All the economic headwinds are going in the wrong direction at the moment,” rued Andy Penn, CEO of Telstra – which is facing intense competitive pricing pressure, a key theme across several sectors – at the telco’s result.

A key influence is the slowdown in the housing market, which affects not just the banks in terms of mortgage demand and credit delinquencies but other sectors including retailers like JB Hi-Fi exposed to household spending, property trusts and building materials suppliers.

“This indicates our value-seeking customers continue to be discerning as they strive for maximum outcomes for their available discretionary spending,” said managing director Ross Sudano.

On the other hand, contractors such as Downer EDI and Cimic (formerly Leighton) are benefiting from the spate of public infrastructure investment, exemplified by this week’s announcement from the Victorian government of a $50 billion suburban rail loop project.

“The Australian economy is doing okay,” says Westpac head of macro strategy David Goodman. “Commodity prices are back up, the consumer is definitely vulnerable, but public demand is expanding at a brisk pace.”

Goodman says while the jobless rate was low at 5.3 per cent, real wages growth is flat and that was flowing through to consumer confidence.

“But consumer confidence is still positive, it’s not a whole-hearted negative story,” he says.

Citi strategists expressed similar sentiment during the month, noting that positive conditions were being reported across most major sectors, particularly mining, transport and construction.

He notes results from the Commonwealth Bank of Australia, AGL Energy and (builder) Mirvac group all signalled a “deterioration in future conditions for consumers”. (AGL reported a 22 per cent jump in bad debts, the result of people not being able to pay their energy bills).

“Credit tightening by the banks and increased repayment costs should be expected to fuel further property price declines,” he says.

As for the stockmarket, leading fund manager Geoff Wilson predicts muted local economic conditions could feed into a more difficult year as the second longest bull market in the US fizzles in the face of trade wars and rising global interest rates.

“This will be a challenging year.” 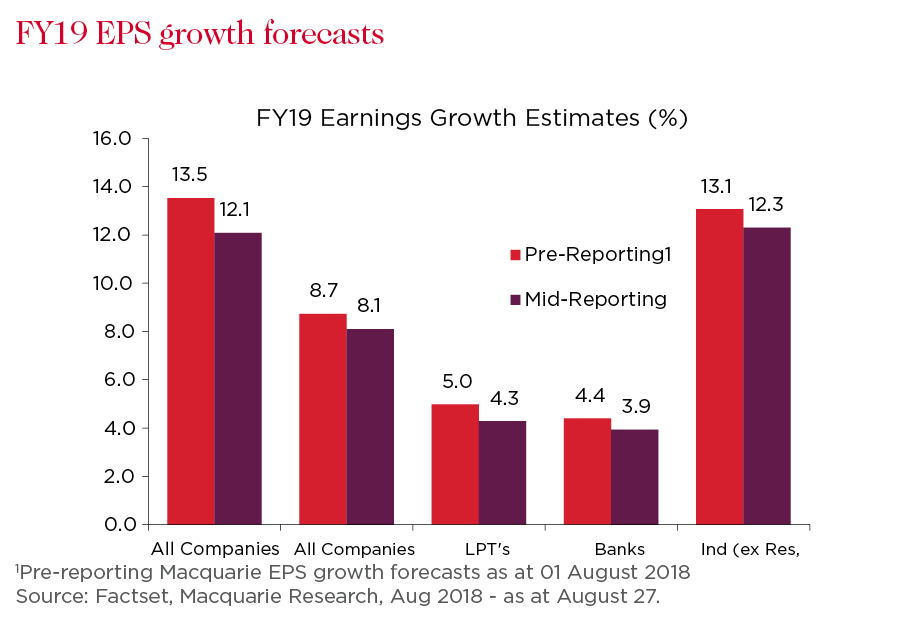 Looking backwards, corporate Australia looks to have earned a solid “pass” mark for this month’s numbers; overall earnings increased a credible 9 per cent (most reported their full-year earnings for the period to June 30 2018), according to AMP Capital.

Excluding the resources sector’s 25 per cent profit surge on the back of the commodities recovery, industrial company profits gained a still-respectable 5 per cent.

During the month, investors were content enough to push the Australian sharemarket to just shy of its all-time highs achieved before the onset of the global financial crisis in 2007. 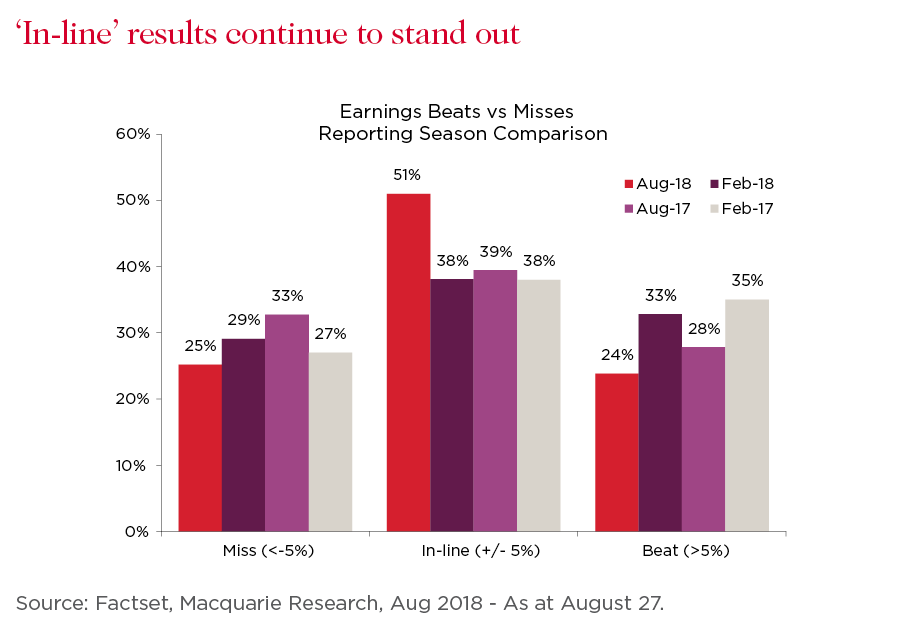 But increasingly, many of our top companies are global players and are thus exposed to influences, such as trade wars, far beyond our shores that is keeping investors on their toes about whether the market is peaking. Donald Trump’s tariff spat prompted plenty of commentary, although the earnings impact remains far from certain.

“The more there are distortions in trade, the more potential it has to create instability and that could have an impact (on business),’’ said Dig Howitt, CEO of global hearing implant maker Cochlear.

Other prevailing themes were intense competition – a headwind called out by energy suppliers including AGL and Origin Energy – and the ecommerce threat posed by new entrants such as Amazon. The recent leadership turmoil in Canberra did not go unnoticed, prompting BHP Billiton CEO Andrew Mackenzie to decry a “panoply of negatives’’ for business.

“More and more companies are facing uncertainty about how things will pan out,” he said.

For example, the Australian Competition and Consumer Commission is highlighting the monopoly pricing power of airports, while energy retailers are in the frame because of the political imperative to reduce prices for consumers and the financial services sector is facing greater scrutiny on several fronts.

According to Macquarie’s equity strategists, other key themes to emerge were cost pressures, the need for investment spending and unfavourable weather conditions.

At least in adversity there’s some comfort: funeral operator Invocare reports that mortality rates are running below trend, so at least there are more of us standing to face the vicissitudes.