A new report has found climate, adult content and human rights abuses are some of the major issues being increasingly “screened” by fund managers in the rapidly growing responsible investment market.

Of the $1.56 trillion total assets professionally managed in Australia last year, 55 percent – or $866 billion – were managed using a responsible investment approach, up from 44 per cent in 2016, and more than double the 25 per cent figure globally, according to Responsible Investment Association of Australasia’s annual benchmark released today.

The bulk of the $866bn is overseen by managers with an integrated environmental, social and governance – or ESG – approach to investment decisions, while the remaining $187bn is managed under “core” responsible investment strategies, such as sustainability-themed and impact investing.

The use of “screening” by managers is another core strategy on the rise. Last year, none of the core responsible investment funds surveyed allowed any investment in tobacco or controversial weapons, and many more also screened for gambling, adult content, climate related issues and human rights abuses.

By frequency, adult content rose from 47 per cent in 2016 to 67 per cent, while environment/climate rose from 42 per cent to 65 per cent. 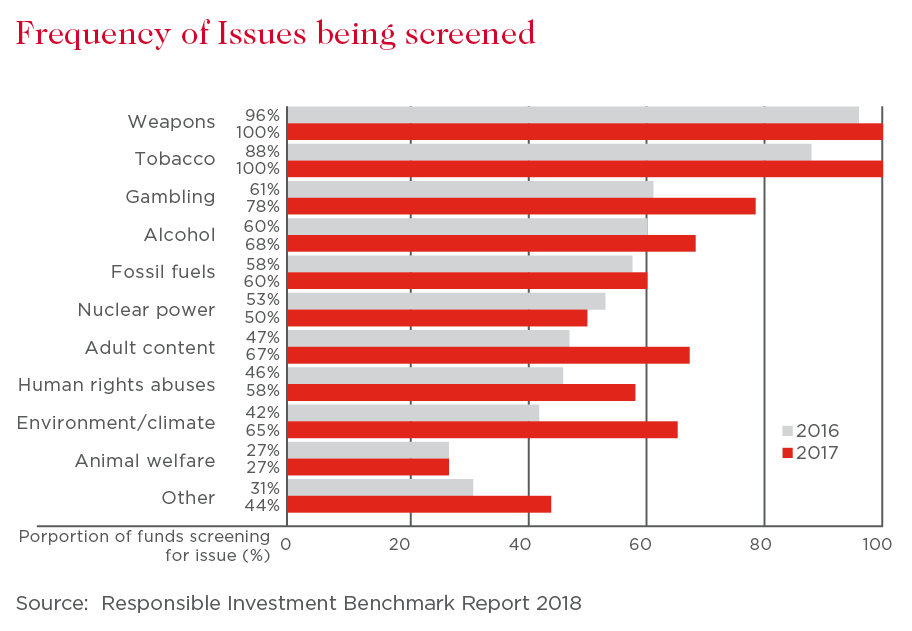 Simon O’Connor, chief executive of RIAA, said responsible investment had become “a licence to operate” for fund managers amid changing societal norms and expectations as consumers increasingly demand a more responsible and ethical approach to the way their pension funds and superannuation was invested.

“The goal posts are shifting and … at the same time the number of issues that consumers are asking their advisers, super funds and fund managers about are increasing,” Mr O’Connor said.

“(And) there has been a very strong acknowledgement by the finance sector globally that if you don't understand ESG risks and … sustainability impacts on the companies you’re invested in, then you don’t fully understand what's driving markets and what's driving share prices.”

Still, the report calls out a lack of awareness and advice among retail investors, including self-managed super funds, about responsible investing options as a headwind to further growth of the sector. Mr O’Connor said education of the financial adviser community was key to turning this around.

“Financial advisers are a really critical gateway into how Australians are investing their money…. (but the) truth is in some pockets of the advisor community, they’ve been slow to understand what this is all about and often somewhat dismissive about clients’ interests in ethical and responsible investing. There are a lot of deeply entrenched myths that still pervade that space,” he said.

BT Financial Group head of customer governance and sustainability Emma Pringle said sustainable investing is a growing area of interest and while there’s still a perception that there’s a performance cost, this latest research shows responsible investment funds have performed consistently over time.

“We're absolutely looking at ways to may make it easier for retail investors to understand and access sustainable investments,” she said.

Mr O’Connor said an increasing number of fund managers’ saw ESG integration as having a positive impact on performance and the historical question marks that hung over the relative performance of responsible investment funds were starting to lift.

During the past year, RIAA’s report shows core responsible investments outperformed Australian share funds over three, five and 10 year horizons. They however underperformed over the one year timeframe, and results were mixed compared to international share funds. 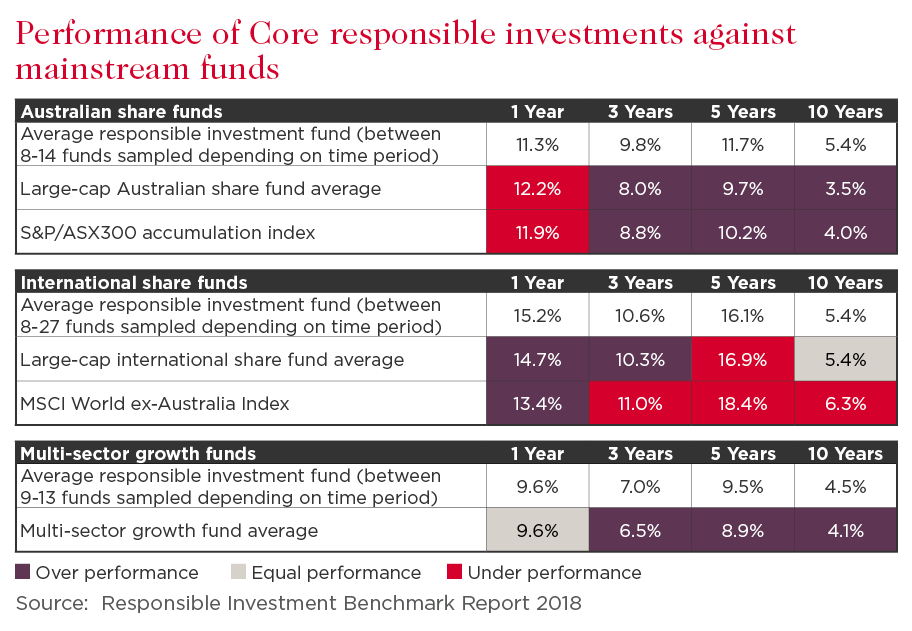 “We've seen pretty consistently strong performance or outperformance and that's been confirmed year on year,” Mr O’Connor said, noting that he expected this to “only strengthen over time” as ESG-related issues increasingly impacted share prices.

To support this, he said RIAA was exploring how regulation of the sector could be strengthened, taking a cue from international markets that he said were more advanced.

“We're doing a lot of work on the policy side to try to get governments to help us ensure that the capital markets can actually deliver on the Paris Agreement on Climate Change and UN Sustainable Development Goals or commit to a fairer society, a more equal society that we all want to live in and retire into.”