In recent months, I’ve been asked many times where house prices are headed.

For homeowners, it’s certainly been a good run over the past five years, as national dwelling prices increased by 40 per cent since early 2012.

Sydney dwelling prices soared by nearly 70 per cent from 2012 while in Melbourne prices rose by almost 60 per cent.

In Brisbane, however, prices rose by around 21 per cent over the same period, highlighting that the housing market is not one market, but is made up of different markets.

This period of rising house prices could be responsible for making home owners complacent. It’s tempting, when an expansion has been underway for this long, to be lulled into thinking house prices will continue to rise.

But, despite the recent good times, don’t be fooled into believing cycles do not exist any longer. 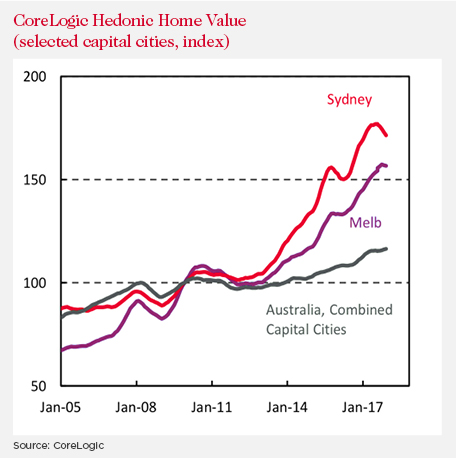 Cycles are still alive and well. Admittedly, sometimes cycles are shorter and on other occasions they are longer, but they never disappear. The recent period of rising dwelling prices was preceded by a period of price consolidation around 2011-2012.

So where are we at in the housing cycle now?

In early 2018, we've clearly moved into the mature part of the cycle characterised by slowing growth in dwelling prices and even some vulnerability in certain suburbs, which have experienced price declines.

It’s a lot to do with interest rates.

A key factor in the expansion in house prices over the past five years has been the very low level of mortgage rates, which have supported borrowing and boosted dwelling prices. But with household debt at a record high and the official cash rate at a record low, the focus is on how the next phase of the cycle plays out, as the major housing markets cool. 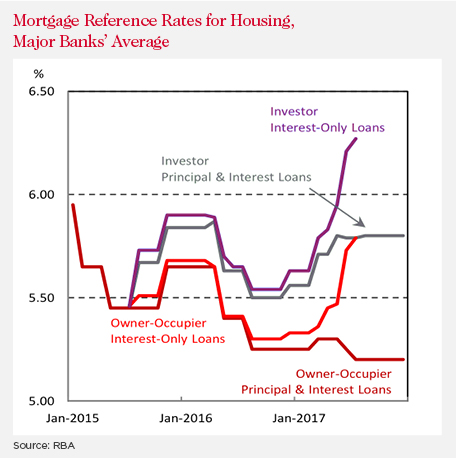 Financial-market participants and economists are now largely in agreement that the next move in the Australian cash rate will be up. But there is less agreement about the timing of the first rate hike.

We at St.George expect the first rate hike from the Reserve Bank of Australia to be delivered next year, as inflationary pressures gradually build over time. The timing of cash-rate hikes will depend heavily on the outlook for economic growth and inflation. Wages inflation, in particular, is being eyed.

The labour market is solid; there has been a record 16 consecutive months of jobs growth to January 2018. While wages growth has been very soft, there have recently been signs of life with a stronger-than-expected wages report for the final quarter of last year. Additionally, growth in the share of firms reporting labour shortages suggests the pace of wages growth could pick up further.

Also, Australia is not immune to global trends. Currently, a massive shift is underway in financial markets globally. The big theme is reflation, amid synchronised growth in the global economy, resulting in a move towards less stimulatory policy settings from global central banks. The US Federal Reserve has already raised rates five times from their trough and are likely to hike at least another three times this year.

The Trump administration is also adding fuel to the momentum in US economic activity by implementing infrastructure spending and cutting taxes.

With US wages growth finally showing signs of life, financial markets are adjusting to the prospect that the federal funds target rate may need to rise higher and faster than what consensus had expected – a key driver also of the recent volatility in stock markets.

Higher global interest rates will not necessarily force the RBA’s hand in raising the cash rate in Australia. However, higher US bond yields will put upward pressure on Australian bond and swap rates, especially at the longer end of the yield curve. Trends in swap rates influence fixed home loan rates at home.

There’s a lot at play in the housing market at the moment.

Measures by banking regulator APRA to curb investor lending have shifted lending towards owner occupiers. First-home buyer demand is also recovering due to greater incentives from State and territory governments. Moreover, greater restrictions on foreign buyers have sapped some foreign demand for housing and helped steer demand to local buyers.

On the supply side, building approvals stepped up from mid-2013 in response to stronger demand, peaking in August 2016 and remaining at elevated levels. It suggests residential construction should remain buoyant over the next 12-18 months. 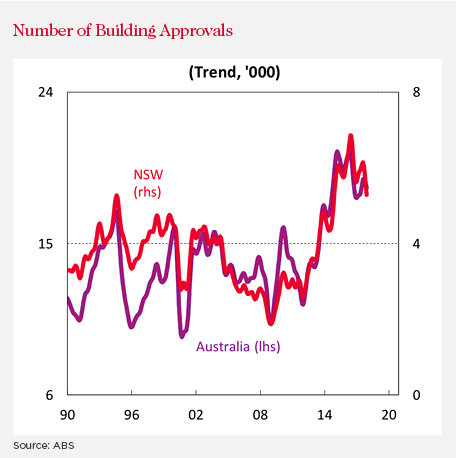 Looking ahead, we still expect further moderation in house prices over 2018. The Sydney and Melbourne markets are on the radar and we the housing markets in these cities to contract over this year on average.

The central bank will be watching closely what the impact of this moderation will have on consumer sentiment, and in turn, consumer spending.

House price increases over the expansion phase supported building construction and consumer spending, and in turn these parts of the economy are likely to come under pressure as house prices soften.

That makes a deepening of the recovery in business spending even more important for the economic outlook.