Getting frank on franking credits

Labor’s announcement last week to remove the ability for excess imputation credits to be refunded to individuals and superannuation funds is just that – an announcement.

Think of it as part of their tax policy announced ahead of the next election, which will happen no later than May 18, 2019.

So how will it affect you? Right now, the answer is not at all.

The measure itself, which Labor predicts will have the biggest impact on self-managed superannuation funds (SMSFs), will mean that if you are invested in Australian shares that pay you franked dividends, you will not (from July 1, 2019) be able to get a cash refund of any excess imputation credits. You would, however, still be able to use the imputation credits that are attached to those dividends to reduce your tax liability, or possibly eliminate it completely.

The dividend imputation system was introduced back in 1987 to prevent double taxation. It works like this - say a company makes $100 of profits, which it then has to pay 30 per cent tax (or $30) on.  This leaves $70 of after tax profit that the company can pay as a dividend. If you received the $70 dividend it would be taxable to you.

Before dividend imputation was introduced, you would essentially have personally paid tax on that dividend. So if you had a personal tax rate of 50 per cent, you would have paid another $35 tax, leaving you with $35 only from the company’s original profit only. In other words, those profits were taxed twice. 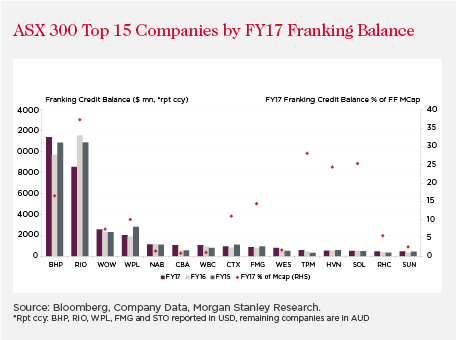 When introduced back in 1987, any excess credits could be used to reduce tax payable on other income. For example, if your personal tax rate was 20 per cent, which is less than the company tax rate, you could use the difference to reduce tax payable on other income. But if you had any credits still left over after reducing your tax liability to $nil, you couldn’t get a refund of the balance.

That changed in 2000 with any excess credits becoming refundable for dividends paid after July 1, 2000. So the measure proposed by Labor now is essentially to go back to the position pre-2000.

The reason this will likely have a big impact for super funds, and SMSFs in particular, is that superfunds only pay tax at the rate of 15 per cent, and could pay no tax in retirement. Because imputation credits are valued at 30 per cent, it makes a refund much more likely. In large superfunds, there are thousands of members, so the benefit of the imputation credit is shared across the fund overall, so no refund will generally occur. And in these funds, they usually reallocate tax benefits to ensure that if your investments in super created the imputation benefit, then your account gets that benefit.

The difference for SMSFs is that they are limited to a maximum of six members, so the chances of excess imputation credits arising is much greater.

The implications for you as an individual also need to be considered. If you only have a low income, you could also notice the impact of this measure. For example, if your taxable income is less than $18,200 right now you have no tax to pay and any imputation credits you earn would be refunded.

So what could you do if affected?

You could possibly change to a different super fund where you still retain the effective benefit of the credit. Or consider investing into something different (for example international shares) that don’t provide imputation benefits. It’s worth getting professional advice, however, given that making any change could have consequences such as tax and fees.

Right now though, this is just an announcement and not law at this stage. You can probably expect to see many more announcements in coming months (from both the government and opposition) in the lead up to the Federal Budget in May and then the next Federal election.

Any commentary contained in this article is not intended as financial advice and should not be relied upon as such by you.