With debate about negative gearing again hitting the headlines, it got me thinking about other issues investors face and specifically a brochure that was recently sent to me by a self-managed superannuation fund set-up and administration organisation talking about using SMSFs to invest in property.

It’s reasonably worded, considered and a world away from some of the spruiking many have seen such as real estate promoters pushing blue collar workers into buying apartments and then creating an SMSF in which to hold the asset.

Such behaviour, which in some cases included “free” trips to the location, may not necessarily be illegal because, despite the tightening of standards around financial advice, direct real estate is not classified as a financial product. However if you are approached with sweeteners, it’s worthwhile being extra alert and aware.

And it’s been catching the eye of many amid the past decade’s broader SMSF boom, where assets under management more than doubled from around $300 billion to about $700bn as more and more people warmed to the idea of managing their own retirement savings.

This latest brochure I received actually noted some of the hazards while also pointing out that small businesses can benefit significantly by exploiting the right to put their own premises through an SMSF.

But it firmed a view of mine that’s only been getting stronger over time: if someone’s trying to talk you into putting a property into your SMSF, remember there’s much to consider. It may be part of a well thought out strategy for your circumstances and might make you money.

However, there may be pitfalls if property makes up the bulk of your fund.

Firstly, you could be inviting concentration risk if you already own a house. If you add up all your family’s assets and find that real estate makes up the bulk of your overall holdings, then you may have a problem in terms of a lack of diversification.

But the lack of diversity is only part of the problem. Another one is that property is a much less liquid asset than the likes of Australian shares, international shares, fixed interest and cash, all of which help make up a balanced portfolio. 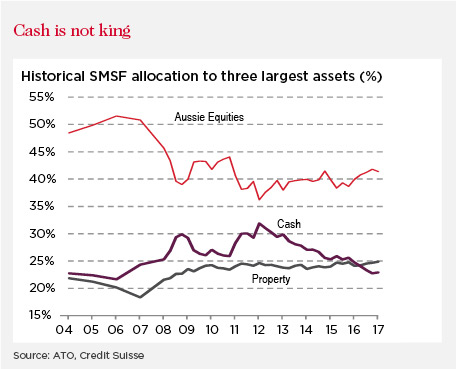 Australia’s had an absolute gusher of a bull market in property, and all bull markets eventually turn bearish.

A recent report from the Bank for International Settlements, jokily known as the Central Bankers’ Bank, noted that while price upswings around the world last an average 13 years, Australia’s now had one for half a century.

And we all know what that means – sooner or later, prices will probably level off or head south. Researcher CoreLogic this month said national dwelling values eased 0.3 per cent in December, an admittedly small amount but perhaps signalling a softer period ahead.

When prices are rising, buyers have to outbid each other for what little stock is on offer. But when they start to fall, the amount of stock available grows as sellers hope to sell before trouble hits.

In my view, the two biggest factors most likely to bring down house prices are a sharp rise in interest rates and higher unemployment. So far, unemployment has held very steady but it’s clear that interest rates will have to go up from their present record low levels sooner or later. On current form it will be later, but they will rise.

And even if you have no plans to sell, lower prices may mean fewer rent-paying tenants, lower rents, or both.

That could be an issue because once you are in the pension phase, your super fund has to start paying you a regular income stream.

For an account-based pension, it starts off gently at age 65 at 5 per cent of your pension account’s balance in the first year, but scales up gradually, hitting 7 per cent when you are 80 and 11 per cent a year if you make it to 90.

If you’ve got all your SMSF assets tied up in a single property and you can’t find a tenant, things may turn nasty. Income flow is of critical importance to many retirees; and the net yield from most tenanted residential property in Australia is lucky to exceed 4 per cent a year, particularly after the last five years of price growth in Sydney and Melbourne.

Also remember that any borrowing for a property purchase in an SMSF has to be quarantined into a special purpose vehicle under a Limited Recourse Borrowing Arrangement, or LRBA, so that if things go south it doesn’t wipe out the trustees’ family’s other assets as well.

Ultimately, it’s about diversification, getting appropriate advice and working out how much risk you are willing to take on based on your life stage and goals.

Property as an asset class has obviously served Australians well for many decades now. But being talked into making it the bulk of your retirement savings may not be a strategy as safe as houses.


The views expressed are those of the author and do not necessarily reflect those of the Westpac Group. This article is general commentary and it is not intended as financial advice and should not be relied upon as such.