For some observers, it epitomised the froth in markets after a multi-year bull run for many asset classes amid falling interest rates and central bank stimulus, most famously the US Federal Reserve’s multiple QE programs that began in the global financial crisis and were followed by cash injections from Europe to Japan.

Elsewhere, investors don’t have far to look for other reasons to feel a little uneasy.

US stock markets are trading at record highs, many nations have experienced property booms and there are trillions of dollars of bonds with negative yields (yields move inversely to prices). While Australia’s stockmarket is yet to achieve its pre-GFC peak, the S&P/ASX 200 index last month broke through 6000 points for the first time in a decade. Meanwhile, the price of cryptocurrency bitcoin has surged from below $US1000 at the start of the year to around $US17,500. 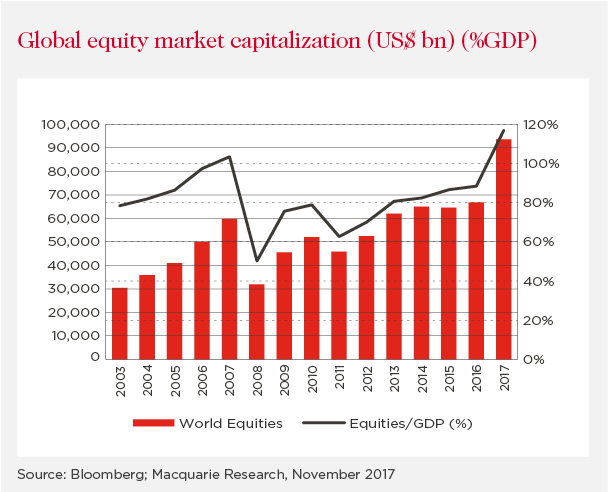 According to several strategists, riskier assets are in a “sweet spot” riding global growth momentum and “accommodative liquidity conditions”. But for others, already lofty prices and further policy tightening from central banks such as the Fed are flashing warning signs.

“The momentum in risk assets would hint at a near riskless world…it appears a nice world, but the balance is uncomfortable,” Macquarie’s analysts recently wrote. Or as bond market veteran Bill Gross simply put it this month: “Be careful in 2018.”

Despite the unease, several experts believe the good times for “risk assets” – such as shares – may just keep on going, betting that even though a correction is obviously inevitable at some point in time, that doesn’t mean it’s imminent.

“There’s an enormous amount of capital in the world, so we’re definitely in a place going forward we haven’t been before,” says Corrin Collocott, chief investment officer of Westpac’s BT Financial Group.

“But there are ways of thinking about the environment we’re in and the differences between what you can get from a stock and a bond, for example, and those measures don’t make you feel like the world’s massively overheated. 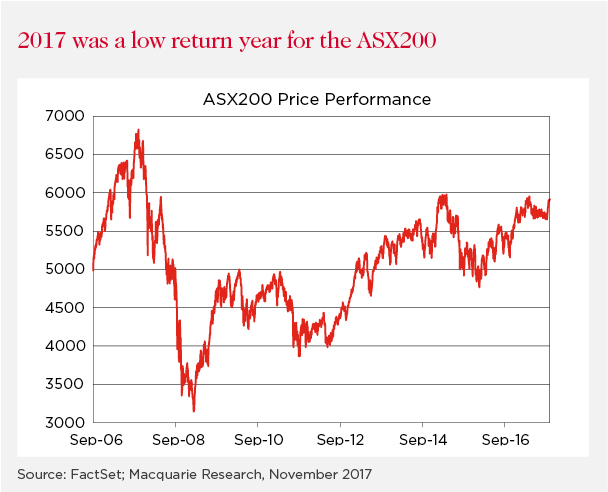 In his first interview since being confirmed as BT’s CIO in September, Collocott says recessions are typically preceded by periods of overinvestment or commodity price shocks. In contrast, he says most developed economies are expanding, interest rates will remain relatively low and corporate balance sheets are good overall.

“It is a very challenging world when you’ve got such a long bull market and the recovery has been going on for some time to not feel like something is going to happen, whether that be driven by North Korea or decisions by the Federal Reserve,” he says.

“But in our view, that means volatility will increase which has been dampened by central banks’ monetary policy. But I don’t think the five year view for now is something to get overly worried about.”

He isn’t alone. In outlook reports for next year, several stockbrokers have recently expressed upbeat views for equities, Macquarie forecasting the S&P/ASX 200 to hit 6500 points by the end of 2018 and UBS pencilling in 6275. That would follow a gain of 5.4 per cent this year up until the end of November, underperforming the 18 per cent lift in Wall Street’s S&P/500 index. 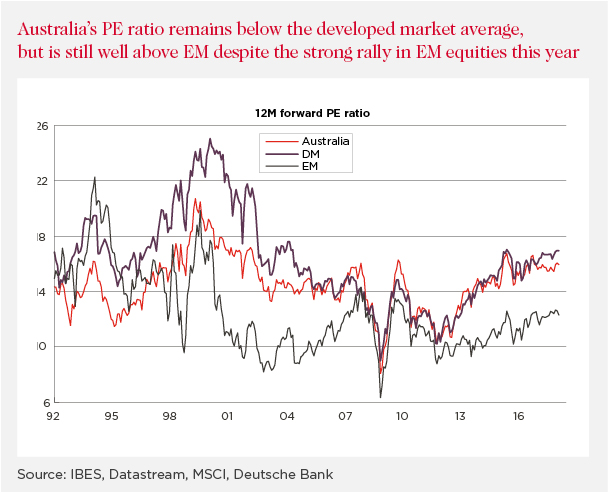 Deutsche Bank strategist Tim Baker however says Australia hasn’t lagged offshore markets once factoring in dividends and the outperformance in the lead up to the GFC. “Global equities have only recently caught up, and the US isn’t that far ahead,” he says. “The most likely scenario (for Australia) is a slow grind higher. Valuations are sustainable according to our model, but not cheap.”

Collocott, whose team of 20 oversees around $35 billion of assets, says he focuses on the outlook for the next five years where the biggest challenge for all investors is likely to remain finding yield, or income – a relevant issue for retiring Australian baby boomers.

He says this demand for defensive assets, such as government bonds, has actually made them the main risk to investors, which is the opposite of what can often be the case.

“The real issue if you think about asset classes is less the risk assets, it’s the defensive assets,” he says.

“I don’t think the defensive characteristics that we used to have in portfolios, where they are countercyclical to equities, are going to be there either so I think the real challenge in portfolios is how you put some defence into portfolios.

“You’ve got the risky assets, but where’s your defence? That’s a key area of focus for us.”

Collocott’s team in BT pick external fund managers across a range of asset classes to provide a diverse exposure to markets. It’s done by a strategic asset allocation process based on forecast returns and risk for the next five years. He says the team’s approach has changed to one where they focus on what matters, having best in class processes and excellent behaviour. He says “that’s how you extract value from markets” because history had shown the difficulty fund managers have in trying to “second guess every government, every currency, every stockmarket”.

“The world and future is unknowable. So what you need to do is stack the probabilities in your favour and behave sensibly,” he says.

“I’ve been looking at investment managers for almost two decades and the ones who rise to the top are the ones who make the fewest mistakes. They’re not ones with crystal balls. They have good processes, are disciplined and make fewer mistakes.

“From the outside, good investment processes look boring.”

This article is general commentary and it is not intended as financial advice and should not be relied upon as such.