The Westpac-Melbourne Institute Index of Consumer Sentiment lifted a further 4.1 per cent to 112 in December.

That puts the Index 48 per cent above the April lows and at its highest level since October 2010 – a 10-year high.

What’s also notable is that the behaviour of the Index highlights the difference between this recession, the downturn during the Global Financial Crisis and the recession of the early 1990s.

While the Index reached comparable lows in all three recessions, the recovery in sentiment this time has been much more rapid. In the early 1990s, for example, it took nearly three years from the lows before sentiment was into a sustained upswing.

That evidence and other aspects of the survey, particularly around jobs, provide some hope that the longer–lasting “scarring” effects we usually get from recessions will be well contained this time. 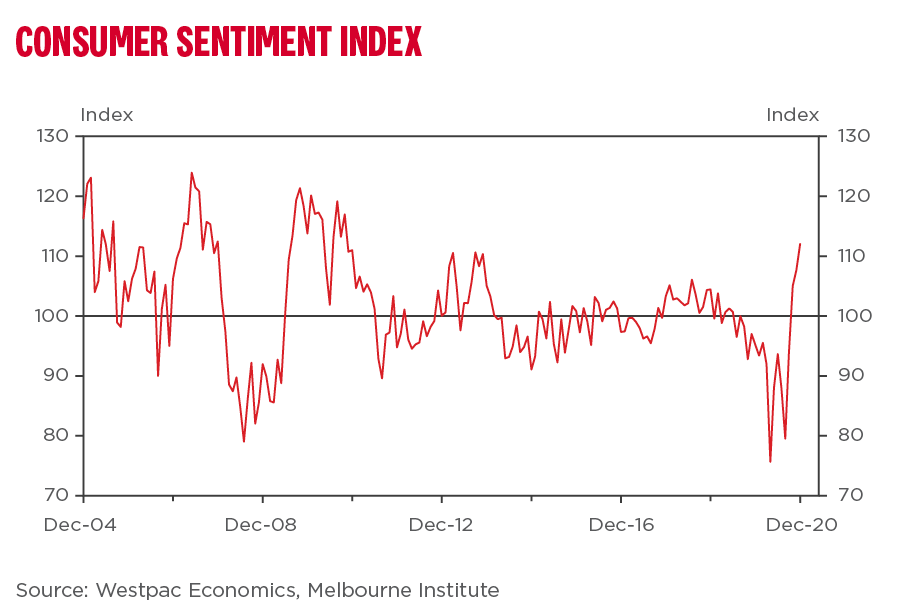 The surge in consumer sentiment gives us even more confidence in the outlook for the economy in 2021.

It also indicates that the unemployment rate will return to close to its pre–COVID level in less than three years, which would compare extremely favourably with both the 1990s recession and the GFC and provide clear evidence that the government and RBA’s policy response, along with the different nature of this recession, have significantly limited the damage to the economy.

But could this positive outlook be unravelled by China’s increasing action on Australia’s exports?

China is our largest trading partner and makes up about 35 per cent, of $150bn, of exports.

Around $70bn is iron ore, $20bn is LNG, and $10bn is gold and base metals. This around $100bn of exports is very safe in my view. The question mark is around the remaining $50bn, with the biggest risk around the $13bn of agricultural exports, such as wine, barley, seafood, meat and cotton, which may increasingly need to find other markets.

But despite these trade shocks and uncertainties, the bulk of exports to China are likely to be unaffected and the surge in the price of iron ore – about half of our exports to China – will help offset the overall macroeconomic impact on the economy.

So, the outlook for the Australian economy in 2021 is very positive – 4 per cent GDP growth and a fall in the unemployment rate to 6 per cent. But as 2020 highlighted, there’s likely to be unexpected developments along the way and very interesting times ahead.