Election 2019: where to next as dust settles

Scott Morrison’s surprise triumph in the federal election was self-described as a “miracle”. Lagging in the public polls, the Liberal-National Coalition was given little chance of success, sentiment clearly not lost on the Prime Minister.

But according to analysts, the win isn’t the only miracle for a new-look government that will have to stare into a slowing economy.

“In his victory speech, Prime Minister Scott Morrison alluded to several miracles…we think that this turn of phrase is actually a surprisingly apt description of what might happen next in markets and the real economy,” Credit Suisse’s equity strategists note in their analysis of the election washup.

“We have already experienced a few miracles of note. First, house prices have dropped more than 15 per cent in Sydney and Melbourne from their peak, but yet the overall economy has not entered recession. Second, even before we have seen RBA rate cuts, the swelling trade balance has already contributed to easier financial conditions.”

While the eventual impact on the economy remains to be seen, financial markets instantly rejoiced at the Coalition’s hold on government for a third term. On Monday, the share market rallied 1.6 per cent on the election surprise, boosted by some sizeable gains among banks, retailers, mortgage brokers and private health insurers. The Australian dollar also jumped as election uncertainty eased and the iron ore price surpassed $US100 a tonne for the first time since 2014, benefiting the nation’s terms of trade.

“The Coalition’s surprise win removes uncertainty about policy change, and this stability is a positive for investors and companies making capex plans,” Macquarie’s equity strategists conclude.

However, less than 24 hours after the stockmarket relief rally, the Reserve Bank’s minutes of its May board meeting and a speech by Governor Philip Lowe reinforced the nation’s economic challenges, confirming it would “consider the case for lower interest rates” at the June meeting to boost consumption and support the jobs market. Westpac Economics swiftly brought forward its forecasts for rates cuts this year, and now expects three: in June, August and November.

So, given the many economic uncertainties, what’s the lie of the land in terms of fiscal policy once the election dust settles?

The Coalition focused its campaign heavily on its multi-year personal income tax cut plan and on the several Labor tax changes it wouldn’t bring in, particularly measures relating to housing and dividend franking credit refunds. Thus, much of the focus has centred around what isn’t changing in the wake of the Coalition’s win of a majority in the House of Representatives.

However, some uncertainty has emerged around exactly when people will receive the increased tax offset, and the overall tax plan is long dated.

In contrast, Labor planned to repeal the government’s 2022 and 2024 plans, and reinstall the 2 per cent Budget Repair Levy for wage-earners in the top income tax bracket until the budget surplus exceeded 1 per cent of GDP. It also proposed a 30 per cent minimum tax on discretionary trusts for beneficiaries over 18.

“The election result should reduce uncertainty among consumers – and housing-related sentiment will be of particular interest given it comes amid expectations of RBA rate cuts, some new policy around first home buyers and maybe some easing in regulatory guidelines for loans,” Westpac senior economist Matt Hassan says. “But it’s too early to be definitive about a general boost to consumer sentiment from what was still a fairly tight election and we’ll see what the data shows.”

Citi retail analyst Craig Woolford adds that while the personal income tax cuts were the most notable for households in almost a decade and the bulk will be spent, some of the cash will be saved following the rundown in the household savings rate.

As widely flagged, Labor’s flagged proposals to limit negative gearing (claiming investment losses as a deduction against income) to newly built properties and cut the capital gains tax discount from 50 per cent to 25 per cent from January appear dead, given the Coalition’s rebuke of the plans.

Likewise, the Coalition campaigned intensively against Labor’s plan to remove cash refunds for imputation credits in excess of income tax paid, which would have impacted the likes of self-managed super funds in the drawdown phase paying little or zero tax.

On election eve, the Coalition also announced a $500 million scheme to support first-home buyers from January who have saved a deposit of 5 per cent. Buyers with incomes of up to $125,000, or $200,000 for a couple, will be eligible.

Combined with the prudential regulator’s move this week to flag the removal of the required 7 per cent interest floor for loan serviceability assessments, economists say it all adds up to a nice surprise shot in the arm for the housing market.

Labor had planned to repeal the government’s cuts to penalty rates, so they appear to be staying. In contrast, Labor’s “Living Wage”, which was to be determined by The Fair Work Commission, looks to be off the table.

In the eyes of many voters, climate change was a key issue.

By 2030, Labor’s headline planned initiatives included a 50 per cent renewable energy target, cutting emissions by 45 per cent from 2005 level and having electric vehicles make up half of new car sales. The Coalition stuck to its goal of reducing emissions 26-28 per cent below 2005 levels by 2030.

The biggest potential change had involved private health insurance with Labor proposing a 2 per cent cap on premium increases for two years.

As always, a fertile area for policies.

Some of Labor’s big ticket items included ending the freeze on Medicare rebate indexation from July, a package to reduce out of pocket costs for cancer patients and $1000 worth of dental services every two years for pensioners and Commonwealth Seniors Health Card holders. In the April budget, the government also pledged to reinstate the indexation of Medicare rebate for general practitioners from July and $331 million over five years to add new drugs to the Pharmaceutical Benefits Scheme.

As previously flagged, the Coalition plans to slice the corporate tax rate for companies generating up to $50 million in turnover to 25 per cent by 2021-22, from 27.5 per cent this financial year. The budget also increased the instant asset write-off threshold from $25,000 to $30,000 until June 2020 for businesses with turnover up to $10m. Businesses generating $10-$50m turnover can also access the write-off for assets acquired after the budget.

Labor campaigned on supporting these measures, but opposed the Coalition’s original plan to cut the corporate tax rate to 25 per cent for all businesses over time. 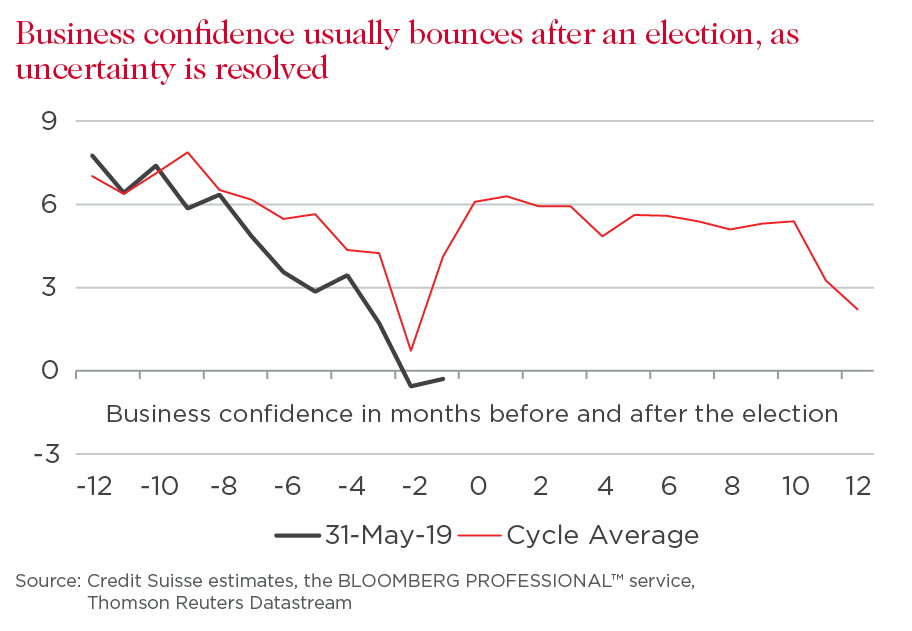 While Labor promised an extra $14bn for public schools in the next decade, childcare became a key election battleground after it promised to lift the pay of childcare workers and reduce the costs for families earning up to $174,000. This pledge followed the Coalition’s overhaul of the the child care subsidy this financial year, which it claims has reduced out of pocket costs for families by 8.9 per cent and resulted in a “typical family” being around $1300 better off a year.

Even though elections aren’t fought on specific economic forecasts, the economy is clearly a key issue for voters.

So, what have some of the experts pencilled in ahead?

For 2019-20, Treasury in the April budget revised down its forecast for real GDP growth from 3 per cent to 2.75 per cent, in line with the level considered Australia’s “trend” growth. But the RBA cut its near-term expectations for the year to December to growth of 2.75 per cent, from 3 per cent. In contrast, Westpac Economics expects growth to ease to 2.2 per cent for the year to December.

As such, the three years until the next election may be a touch bumpy.

But for the long term, RBA Governor Lowe this week warned that monetary policy – and also fiscal policy – can only do so much to drive stronger medium term growth, emphasising the importance of structural reform to drive productivity growth and higher living standards.

“What will drive stronger growth are structural policies that promote firms hiring people, investing, being innovative and expanding,” he said.

“So, the policy settings that governments set really are important…things like education policy, the attitude towards entrepreneurship and innovation, the way we invest in infrastructure, the design of the tax system—these are the things that ultimately can drive economic growth.”