Budget 2019: What the economists expect

Households are set to be showered with tax cuts and other benefits in a “give back to the people” federal budget, laying the ground for a rapid-fire official election campaign that both major parties have flagged will be fought on economic issues and taxation, economists say.

Ahead of the May federal election that the government enters lagging in the polls, Treasurer Josh Frydenberg on Tuesday is tipped to unveil an improved budget balance since the December Mid-Year Economic and Fiscal Outlook, providing ammunition for spending options while still delivering a surplus in 2019-20. Economists say the “flexibility” provided by higher commodity prices and healthy jobs growth is likely to be spent on tax cuts and cash hand-outs, leaving the budget profile unchanged from MYEFO.

“Now is the time to deploy that flexibility – given the recent loss of momentum in output growth and given the pressure on households from falling house prices, high debt and weak wages growth,” Westpac chief economist Bill Evans said, noting the $10bn budget improvement in the next few years on stronger iron ore and coal prices.

“We anticipate that all of the upside surprise to the budget will be returned to the people – in the form of lower taxes and higher spending. This is a budget that will 'give back to the people'.”

While not unexpected after MYEFO flagged billions of dollars in flexibility from “decisions taken but not yet announced”, the specifics of any household sweeteners will be keenly watched in a budget that economists say has greater implications for the Reserve Bank after signalling it could cut the cash rate if the economy slowed further. The election, which must be held by May 18 (speculation centring on May 11), is expected to be called within days of the budget, Labor labelling it a “referendum on wages” as the government trumpets its economic management since 2013.

JPMorgan economist Sally Auld also pencilled in income tax cuts for low and middle income households along with cash payments – speculated to flow to pensioners and people on welfare. With some of the government’s prior $144bn tax cut plan taking effect on July 1, predominantly for low income earners, she said the Coalition may be “tempted” to bring forward relief for higher income earners slated to occur in 2022 and 2024. All up, Macquarie economists estimate the budget could contain $5bn of “household assistance measures”. UBS economists have flagged $10bn in tax cuts alone, the largest in about a decade but well below the tax reductions unveiled by the Howard government in 2006-07.

“The 2019/20 budget will be a critical document for framing the government’s election campaign,” Ms Auld said of Mr Frydenberg’s first budget since becoming Treasurer last year following the change in Prime Minister to Scott Morrison from Malcolm Turnbull.

“For the first time in a while, fiscal policy will shift to a more stimulatory setting.

“While it might be hard for the government to resist the temptation to spend more ahead of an election, we ultimately think that the Treasurer will be keen to preserve the government’s status as a ‘responsible economic manager’.”

On Westpac Economics’ forecasts, the budget will move from a $5.2bn deficit this financial year to an underlying cash surplus of $4.1bn in 2019-20, in line with MYEFO and the first move into the black since 2007-08. The numbers continue to improve in the outer forecast years as the surplus grows to $19bn in 2021-22 and net debt falls to $313bn, from $352bn this year.

Mr Evans, however, cautioned there were risks to the budget’s projections and that output growth in the economy “this year and next disappoints”, forecasting real GDP to be cut to 2.5 per cent for 2019-20, from 3 per cent previously, as other forecasts such as wages growth are also downgraded.

“This budget comes at a time when a number of the timely indicators of economic activity are showing some weakening and global growth is slowing,” HSBC chief economist Paul Bloxham said. Along with tax cuts, Mr Bloxham said there would be spending on social programmes and infrastructure, plus a potential boost to first time home buyer grants.

“Because of the election, it is possible that the measures announced in this budget may not be passed. However, it is likely that the opposition Labor party…will also propose spending measures, with its current platform suggesting there could be even more public spending if there were to be a change of government,” he said. 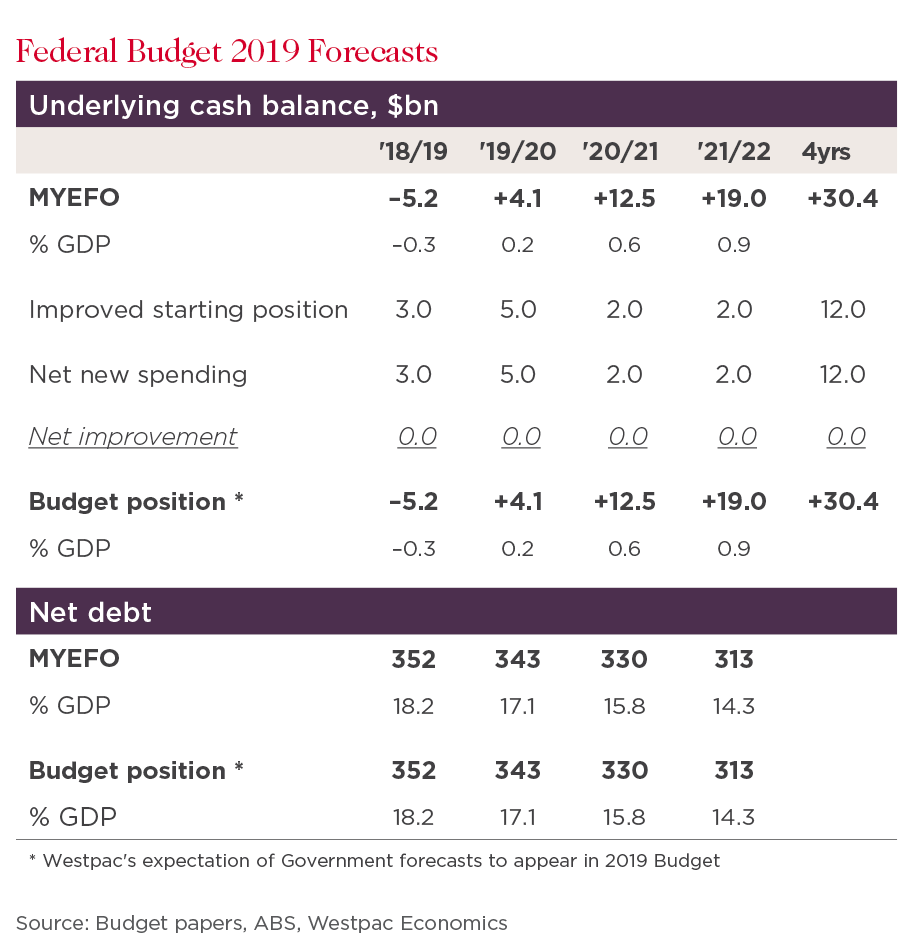 For the RBA, Mr Evans said the budget may have more bearing on monetary policy decisions than previous years, particularly any measures to support households amid soft consumer spending. However, he stuck to Westpac’s forecast the RBA will cut the cash rate in August and November. Ms Auld agreed the RBA “may not be able to wait” for any fiscal stimulus.

“Any ‘bidding war’ between the parties, particularly around one-off payments, is likely to be seen by the RBA as a temporary ‘sugar hit’ that will not generate sustained higher income growth,” Mr Evans said.

“Tax cuts may allow the RBA to be a little more confident about the income/consumption outlook but that will be after it adjusts its current views to a much more realistic and lower growth trajectory as has become apparent through the second half of 2018 and 2019.”

Also likely to be closely watched in the budget is any stimulus for small businesses already on edge in an election year. According to a recent Westpac survey, 50 per cent of small businesses are worried or uncertain about the major parties’ various policies and one in five say they will delay buying equipment. Based on prior tax cuts and stimulus measures such as the Rudd government’s $900 cash handout in the global financial crisis, Macquarie equity analysts say retailers across clothing, footwear, department stores and recreational goods could experience a boost in sales. 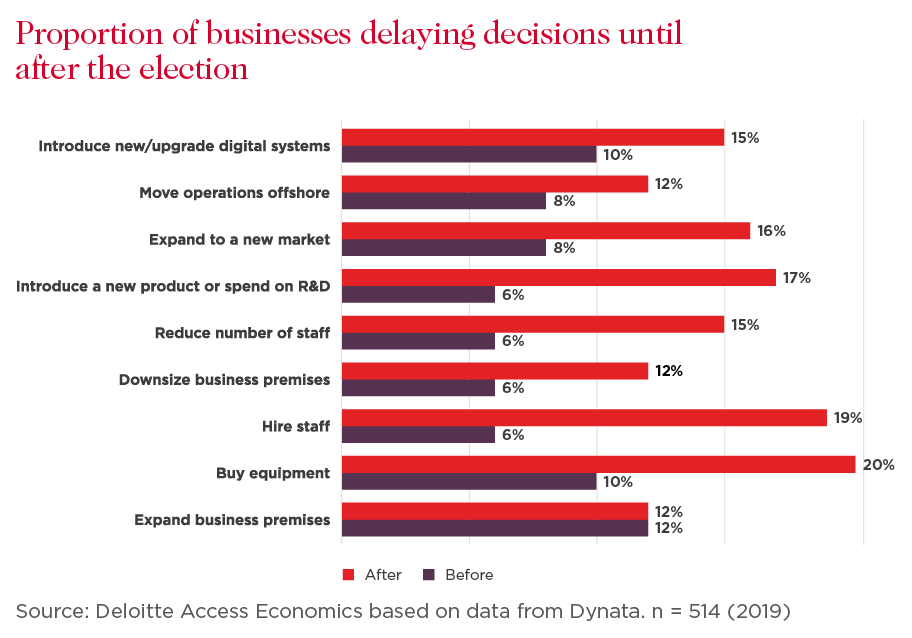 Mr Evans said providing a boost to business investment from accelerated depreciation allowances could be one of several measures in the budget “which provide a more enduring boost to the economy”. New infrastructure projects, including in the regions, may also feature alongside or as part of assistance for areas experiencing severe drought.

“The Labor Party is likely to frame its Budget reply in the context of responsible fiscal management too, but we suspect the focus, distributional consequences and policy approaches will be quite different to those underpinning the government’s Budget.”