What to expect from ‘patient’ Fed

Ask most people if they’re concerned about global “crosscurrents” and you’re likely to draw a blank look.

Yet for the US Federal Reserve – one of the most impactful central banks in the world -- these so-called crosscurrents, or risks, are critical to what happens with official interest rates in the world’s largest economy and their impact on financial markets around the world.

After leaving rates unchanged at their first meeting of the year this week, Fed Chair Jerome Powell made clear these risks were global in nature, highlighting two of the big ones on everyone’s mind: the deceleration of growth in China and other emerging markets amid lingering trade tensions between the US and China, and the uncertainty surrounding the UK and Europe owing to Brexit.

Domestically in the US, there’s also the risk of more government shutdowns as in 2019 Congress not only have to agree on a funding plan for the current financial year but also a compromise on the debt ceiling and a new level for government spending from October 1, post the recent extraordinary fiscal stimulus. Clearly, “US fiscal risk” could remain abnormally elevated through 2019.

Why does all this matter?

Well, just a month ago they’d been flagging "some further gradual increases" in interest rates, on top of the nine delivered since 2015, when the Fed began its hiking cycle from a fed funds rate of 0-0.25 per cent (to 2.25-2.50 per cent now). 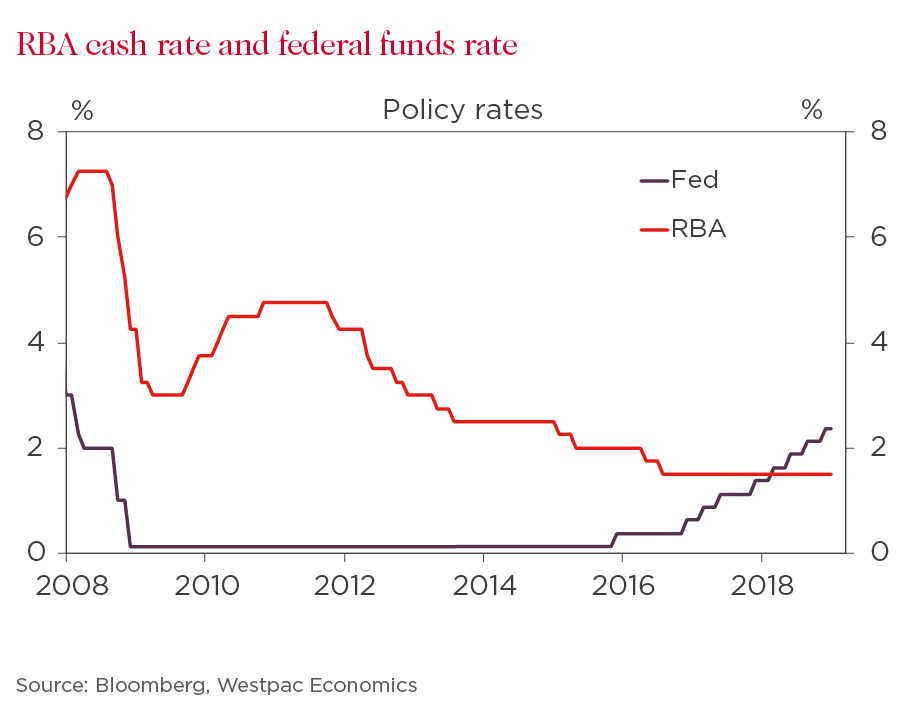 So this week’s change in guidance may restrict  gains for the US dollar (and thus support the Australian dollar) and aid sharemarkets in the short term. But we expect the Fed to resume its hiking cycle in June with another 25 basis point increase, followed up with the same in September.

Basically, we feel the market is too negative on the fundamental strength of the US economy. While the Fed is clearly more cautious on the outlook due to global risks, their characterisation of the US’ real economy remained robust on the back of “strong” job gains, a “low” unemployment rate, strengthening household incomes and “strongly” growing household spending.

Looking ahead, the jobs market and the health of consumers will be key. But assuming current global risks don’t worsen, or new ones emerge, raising interest rates twice more this year into territory considered “neutral” provides the Fed more capacity to react down the track to any and all eventualities, such as a downturn in growth or a recession.

Given our view that the Reserve Bank of Australia will keep the local cash rate on hold until at least the end of 2020, a likely outcome of all of this is a lower Australian dollar of around US68c by September 2019.

As always, the data and political flow will be critical to eventual outcomes. But it’s fair to say the Fed gave market watchers plenty to contemplate early in the year.