It’s three months since Amazon launched its Australian retail operations – and the behemoth may be awakening.

As the US-based giant last week rolled out its new fulfilment service, Morgan Stanley analysts noted that since launch in Australia on December 4 – which many observers dubbed underwhelming – Amazon had quietly “expanded the width of its offer, lowered pricing considerably and improved delivery terms markedly”.

Amazon has also begun partnering with social media “influencers”, tapping into identities with high numbers of followers on platforms such as Instagram, Twitter and blogs.

Amazon’s on-the-ground entrance in Australia has attracted much attention and divided observers, some labelling it underwhelming while others argued the company was assessing the lay of the land.

It’s also being watched by economists amid already fierce widespread discounting across the retail sector. Last month’s official retail sales data showed non-food retail prices fell 0.9 per cent in the final quarter of 2017 and 2 per cent annually, the fastest rate of decline since the early 2000s.

Harvey Norman last week laid bare initial scars of rising competition when reporting a contraction in profit before tax franchisee margins, partly due to greater investment around enhancing delivery and the online shopping experience. Myer and other retailers have also reported weaker than expected results amid subdued spending. “As we have noted previously, the first impact of Amazon in Australia, would be self-inflicted by retailers investing in online capability and experiencing lower aggregate margins as a result of online sales growth,” Credit Suisse analysts said last week. 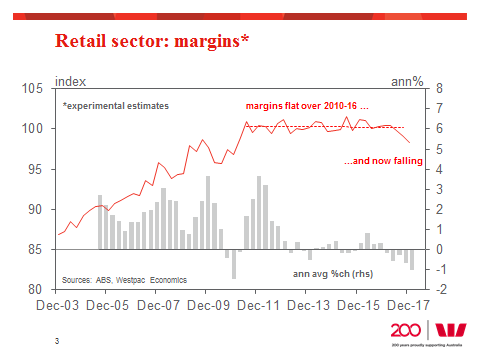 Rian Madex, an associate director of industry analytics and insights in Westpac’s institutional bank, said Amazon appeared to be undertaking a progressive rollout rather than make a “big bang”, initially focused on offering third party merchandise through their “marketplace”. “I’d anticipate over time they’ll increase the range of 1P (i.e. inventory they own and sell) as they develop a better understanding of the Australian market. The rollout of Prime later this year could be the catalyst to entrench them in this market as it will drive repeat purchasing amongst customers,” he said.

Mr Madex added an issue for traditional retailers was that, while online sales may be growing strongly, if overall sales weren’t also expanding they were potentially facing the prospect of unprofitable stores in their bricks and mortar networks.

The mooted local launch of “Amazon Prime”, which offers two-day delivery and video and music streaming, would follow the rollout last week of “Fulfilment by Amazon”, whereby it picks, packs and ships orders from its distribution centre in Dandenong, Melbourne on behalf of vendors. It forms part of Amazon’s expanding presence in Australia, also recently rolling out its “Alexa” digital assistants, which connect devices and answers questions, including about banking.

Ahead of this week’s fourth quarter GDP data, Westpac senior economist Matthew Hassan said even though pricing pressure was intense, decent retail sales volumes suggested wider consumption may have propped up economic growth in the final months of last year a little more than expected, in contrast to the weak contribution in the third quarter.

Mr Hassan added Amazon’s rollout would need to be watched going forward, agreeing it was still “hard to judge” the launch. “There’s obviously a lot to do to bring operations up to speed but I thought they could have done a better job of capitalising on launch day, particularly in terms of the range on offer,” he said.

“And I’m still puzzled by the lack of functionality on the Australia Amazon site compared to the US. By all accounts the range and pricing on the Amazon US site is still streets ahead.”