For many young Australians and low-income households, the “Australian dream” is slipping further out of reach.

Dwelling prices are surging and wages growth is around record lows, making home ownership increasingly challenging for first-home buyers, who tend to be younger and have lower incomes than the average household.

House prices have rebounded faster from the COVID-19 recession than any other major economic downturn in the past 40 years. In fact, according to CoreLogic data, national dwelling prices are already 10.2 per cent above their pre-COVID peak after surging a further 2.3 per cent in May.

On the one hand, there are positive spill overs to the broader economic recovery from a strong housing market, lifting dwelling investment and boosting spending via wealth effects.

But it is an increasingly challenging picture for prospective buyers.

Aside from a bigger mortgage, higher dwelling prices make saving for a deposit and the transaction costs associated with purchasing a house a bigger hurdle for would-be buyers.

One measure of housing affordability is the ratio of the median dwelling price to average household income, which we estimate using annualised average weekly earnings. A higher ratio implies a deterioration in affordability.

If we assume average incomes are unchanged from the latest available data from November 2020, dwelling prices reached seven times average annual earnings at the end of April. 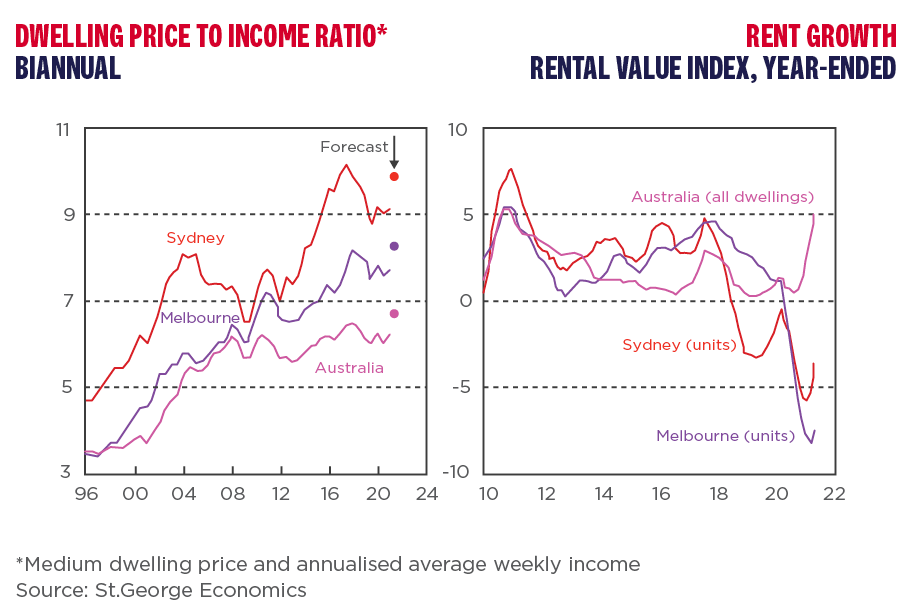 As has been the case for many years, affordability constraints are most prominent in Sydney and Melbourne. In the former, the dwelling price-to-income ratio had increased to close to 10 by the end of April, not far from its 2017 peak. In Melbourne, the ratio increased to around eight in April, its highest level on record.

Elsewhere, the dwelling price-to-income ratio is also above the national level in the ACT and Hobart. Dwelling prices grew more sharply in these areas than other capitals over the past five years.

Early signs of the affordability squeeze are already apparent in lending to first-home buyers, new lending approvals having peaked in January 2021 before edging down over the following two months at the same time as housing finance more broadly continued to surge.

On top of this, advertised rents have been increasing since the second half of 2020 and residential vacancy rates have declined, alongside the economic recovery.

CoreLogic data suggests rents have increased 4.9 per cent on a national basis over the year to April, making saving for a deposit even more challenging for first-home buyers.

However, rental market conditions are uneven.

The legitimisation of working from home and demand for more living space following the onset of the pandemic have boosted demand for houses over units, and interest in regional areas over cities.

Alongside the changes in our lifestyles, Sydney and Melbourne apartment markets were also hit hard by the closure of international borders. In the year to April, rents declined 7.6 per cent on Melbourne units and 3.6 per cent on Sydney units, although rents in the latter have started to pick up in recent months.

Another metric of housing affordability is the ability of households to service a mortgage.

The Reserve Bank last year unleashed an unprecedented package of stimulus measures which pushed interest rates to record low levels. As a result, servicing costs for mortgages are lower. Indeed, this is one of the key drivers of the surge in housing demand.

However, any increase in mortgage rates will exacerbate affordability pressures, and fixed home loan rates might be as low as they are going to get because swap rates in wholesale markets troughed late last year.

So, what does this mean for prices?

We expect 15-20 per cent growth in dwelling prices this year, followed by more moderate growth in 2022.

Some prospective buyers will be deterred as affordability is stretched, which will take some of the heat out of dwelling price growth. However, interest rates and the ongoing recovery in the labour market will remain the main drivers of prices.

The other key factor will be whether policymakers put the brakes on by tightening “macroprudential” policy, which could happen next year and slow housing price growth.

But for the time being, prices have further to run.

With a significant pickup in wages growth not expected anytime soon, the combination of rising prices and rents may be a tough pill to swallow for “generation rent” for the next little while.