Make no mistake, this is a big spending budget.

New stimulus initiatives, headlined by the surprise extension to the instant asset write-offs for businesses, are worth 4.1 per cent of GDP over four years – about eight times the pace of the pre-election budget in 2019.

For perspective, the government’s stimulus spending in last year’s budget following the biggest economic shock since the 1930s was a little higher at 5.5 per cent of GDP, but not materially so.

Despite employment levels now being above pre-COVID levels and GDP expected to boom this year, the government is clearly going all in to “secure the recovery” and drive the unemployment rate down faster.

This drive for growth strategy, along with appropriate commitments to additional services, sees fiscal and monetary policy firmly working together to reach full employment. 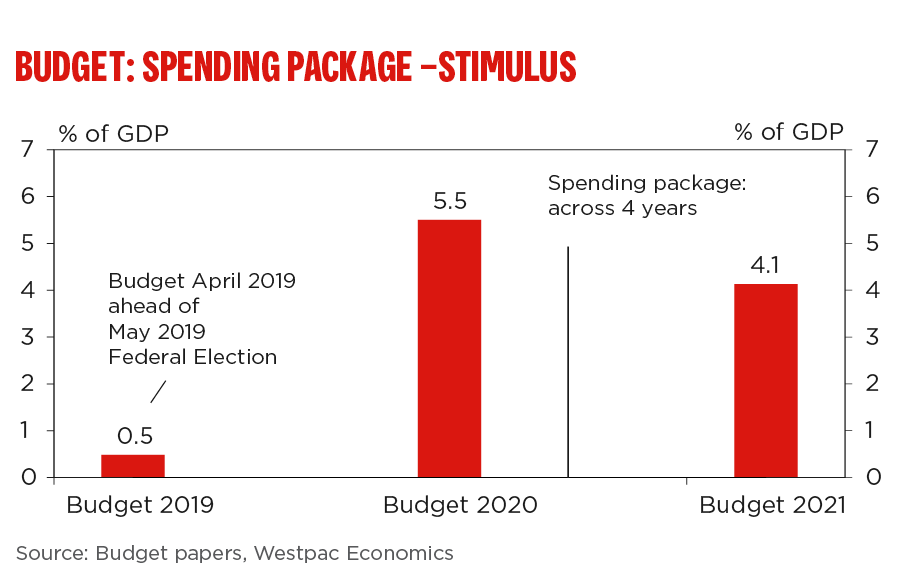 The government defines full employment as 4.5 per cent, although that level is not forecast to be reached until mid-2024. Westpac – and I believe the Reserve Bank – sees it as 4 per cent or even a little lower.

Despite the forecast lift in business investment and the drive towards full employment, the budget still forecasts that over the four years workers can expect a repeat of recent times when real wages remained flat or in retreat.

In 2020-21, the extraordinary improvement in the budget bottom line to a deficit of $161 billion came through the stronger than expected economic recovery and surging commodity prices. But from 2022-23, the government is forecasting larger deficits than previously, with no surplus in sight.

This is partly due to the much-needed increase in funding for aged care, childcare and the NDIS, which will result in total government payments holding well above the average of 25 per cent of GDP since the late 1980s through the forward estimates.

The good news is that the strategy is affordable. 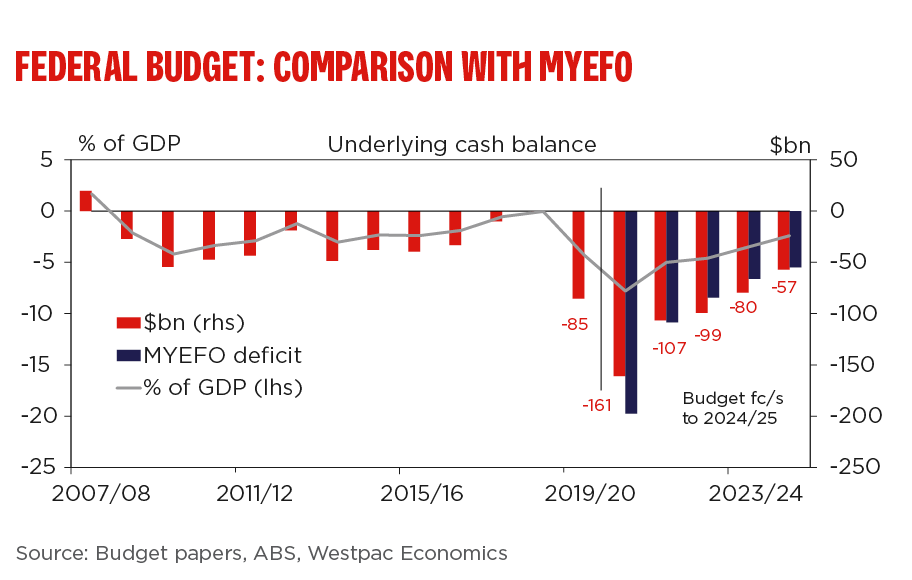 Net debt will rise and is expected to peak at 40.9 per cent of GDP in 2024-25, about double pre-pandemic levels. But this is well below other developed nations such as the US and UK (both in the vicinity of 100 per cent), and the fall in interest rates means the cost of servicing the debt remains low and going sideways at only 0.7 per cent of GDP over the forecast period.

The disappointing news out of the budget was the missed opportunity to bring forward genuine tax reform.

Extending the instant asset write-off and loss carry-back schemes for businesses for another year to 2022-23 at a cost of more than $20bn over four years will support business investment, which has undoubtedly been weak.

The goal is to accelerate investment plans to boost productivity, rebalance the reliance on households and drive growth.

But there are risks.

Businesses who are still concerned about the uncertainties posed by the pandemic may now choose to take advantage of the extra time and delay projects.

Cashed up consumers are set to drive the economy this year, buoyed by the strong housing market, jobs market and the national border remaining shut (in 2019 Australians spent around $55bn on holidays overseas, well above the $25bn foreign tourists spent in Australia). 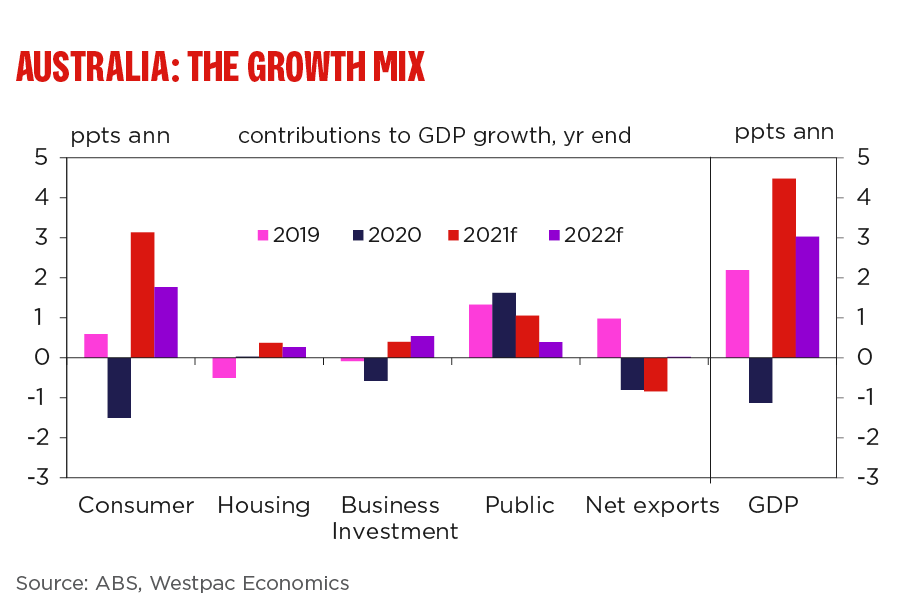 Extending the Low and Middle Income Tax Offset (LMITO) for another year at a cost of $7.8bn will provide another lump sum rebate to many Australian consumers next year.

This initiative was first introduced to compensate some taxpayers in advance of the stage two tax cuts. When stage two was brought forward two years in last year’s budget, the government kept the LMITO, giving eligible taxpayers a ‘double tax cut’.

This budget now extends the double tax cut for another year. And we cannot discount a further extension should next year’s budget occur before the next election.

But extending LMITO is not tax reform.

In contrast, bringing forward stage three of the government’s personal income tax cuts from July 2024 would have delivered genuine tax reform by eliminating the 32.5 per cent and 37 per cent marginal tax rates, and lowering the rate to 30 per cent for incomes between $45,000 and $200,000.

Recall that the small business tax rate is now 25 per cent while the corporate rate is 30 per cent, and what has emerged is this disconnect between personal and company tax rates.

At a net cost of around $10bn a year ($17.5bn compared to $7.8bn for LMITO), the boost to competitiveness, incentives, participation and after-tax incomes would have been entirely justified given that the government’s starting point in this budget had improved by $104bn over the forward estimates.

Our tax system should not continue its over reliance on higher income earners. The top 20 per cent of taxpayers already pay 63 per cent of all tax, up from 60 per cent three years ago.

The rapid recovery in the economy which is reflected in the dramatic improvement in the budget bottom line is still challenged by risks around the virus and the global economy.

The government’s bold stimulus program is to be applauded, although a stronger lift in productivity, demand and real wages could have been achieved with a more reformist approach to tax.