In April, as the coronavirus crisis escalated around the world, the International Monetary Fund’s chief economist fronted a press briefing after warning of the worst global recession since the 1930s Great Depression.

Batting away the first question on whether governments should hike taxes to repay the surge in debt, without mentioning the “T” word, Gita Gopinath promptly urged advanced economies to coordinated “broad-based fiscal stimulus” once the pandemic phase passes and the recovery is underway.

In other words – don’t pull back on stimulus too soon and don’t even think about raising taxes to reduce ballooning deficits and debt, at least not for a very long time. Indeed, Bloomberg headlined its story “IMF Urges Post-Pandemic Stimulus to Avoid Depression Mistake”, referring to the premature unwinding of stimulus and budget deficits that is considered to have prolonged the economic pain.

A few months on and trillions of dollars of stimulus later, of all the risks out there – second waves, the US election, trade tensions – concerns about “policy mistakes” have only grown as attention turns to what the next phase of the pandemic looks like, including in Australia. Banks this week provided part of the picture by pledging further support and the option for some customers to apply for four-month extensions on loan repayment deferrals, upping the anticipation for the government’s economic update on July 23 for further details about support post September.

And with Melbourne’s fresh six-week shutdown talking some of the shine off Australia’s relatively strong COVID-19 performance, the stakes are high.

“Of the three main risks mentioned by clients, a second virus wave, a Democratic sweep in the US presidential election; and a policy mistake, it is the third one that worries us the most,” JPMorgan’s global market strategists wrote last week. Similarly, Macquarie’s team said: “The greatest risks are policy errors. Panic when policymakers relax." 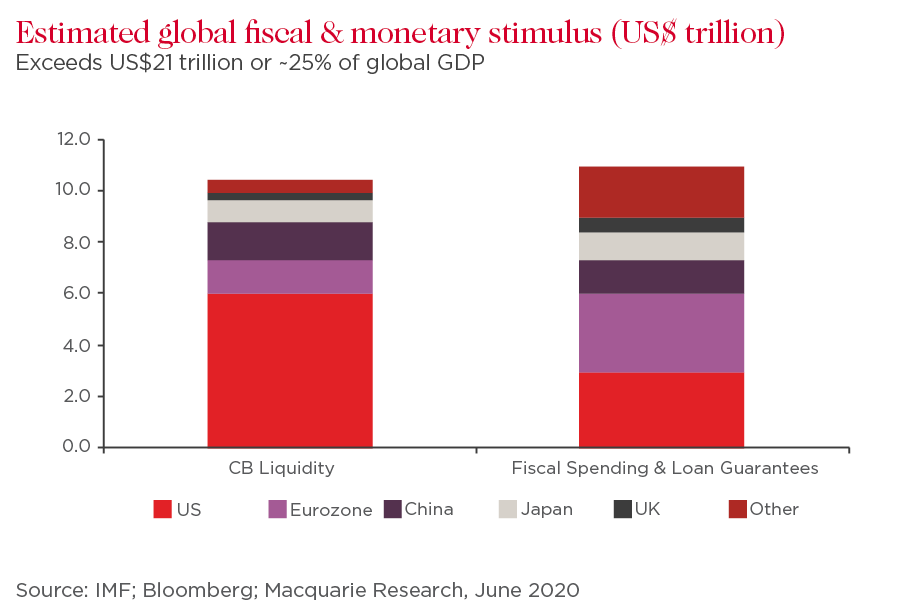 “Policy mistakes” are thought of in different ways, but are generally moves by governments and central banks that negatively impact markets and economies, often because the action comes too late, is too little or too much. The trouble is, it’s not always clear until after the fact. Veteran economists, for example, cite the Reserve Bank of Australia’s hiking of interest rates to 18 per cent in the late 1980s as the policy mistake that ultimately caused the recession “we had to have” in the early 1990s.

But in this COVID-19 recession, with central banks saying interest rates won’t rise from zero for years, plus committing to do “whatever it takes” to support markets, the focus is as much, if not more, on governments and fiscal policy.

The good news is, politicians – having initially responded hard and fast to the crisis – seem to know their job is far from done.

Bill Evans, Westpac’s chief economist, says governments around the world are alert to the need for further stimulus and have “plenty of scope to use fascial policy to get through these issues”, particularly in Australia.

Ahead of the government’s update later this month, Mr Evans predicts the JobKeeper wage subsidy program will be extended for some workers in hard hit industries until mid-next year, costing $24 billion in 2020-21, while the JobSeeker unemployment payment would be set at $850 a fortnight – an almost 40 per cent hike to the old Newstart – adding around $11bn to this year’s deficit. He also expects the October budget to bring forward the personal income tax cuts slated for 2022 as part of a $15bn fiscal package, arguing supporting demand in the economy by boosting household incomes was critical.

But speaking at a briefing this week, Mr Evans says Australia’s debt position remains well below other nations and the government will be able to access cheap debt for years at the same time as the economy rebounds to between 2.5-3 per cent.

In addition, he notes the negative public discourse around government debt had softened in recent times.

“My view is that the debate around the government is no longer this fear about increasing government debt. And heaven forbid the fear about raising taxes in this current environment,” he said.

“2022 is going to be an election year, can you imagine wanting to raise taxes in 2021 or 2022 at a time particularly when the debate is moving toward ‘what’s so bad about debt’, when the rest of the world has such high debt and the ability to fund it is so easy at these interest rates.

“If you’re borrowing at 1 per cent and your economy is growing at that pace, your government debt is not putting a weight on your economy. In fact, it’s becoming a smaller part of the economy as you move forward.”

Perhaps by no coincidence, this shift in debate around debt has coincided with the rise in prominence of Modern Monetary Theory, or MMT, the divisive way of thinking premised on governments that control their own currency having no real limit on spending because they can “print”, or digitally create, money. While the government has brushed off MMT, higher debt looks to be here for some time to support the economy through a highly uncertain recovery, reinforced by Melbourne’s lockdown to get on top of a notable spike in infections.

Following the move, Westpac Economics cut its 2020 GDP forecast from minus 4 per cent to minus 4.2 per cent, pointing out that about 25 per cent of the economy by population would be impacted by the shutdown.

“The tricky dance increases in difficulty and shifting from crisis to growth stimulus is a key success factor for recovery,” Morgan Stanley strategist Chris Nicol said following the fresh lockdown, albeit adding it would likely lead to even more fiscal support.

With all this extra debt in the world and governments playing a bigger role in all our lives, risks relating to policy are unlikely to go away.