The Fed, Trump and trade: where to next

The US Federal Reserve last month cut its key interest rate by 25 basis points to 2.125 per cent, creating headlines for being the first US rate reduction since the global financial crisis.

Although a significant development, financial markets were most interested in the “new news”, particularly Chair Jerome Powell’s language that the move marked the beginning of a “mid-cycle adjustment” of policy “not the start of a long series of cuts”.

Just a day later, however, confidence in this course of action was shattered when President Trump unveiled a new 10 per cent tariff on $300bn of Chinese imports to the US previously unaffected by the trade war. China quickly indicated it wouldn’t stand idle and allowed its currency to depreciate to levels not seen in years, improving the competitiveness of its exports.

Coming at a time when US growth was already deteriorating, the escalation of trade tensions will have a material adverse impact on the US economy, particularly through investment and employment.

Given the major importance of US monetary policy to global markets and central banks, including in Australia, the key question has thus become: how will the Federal Reserve now respond? 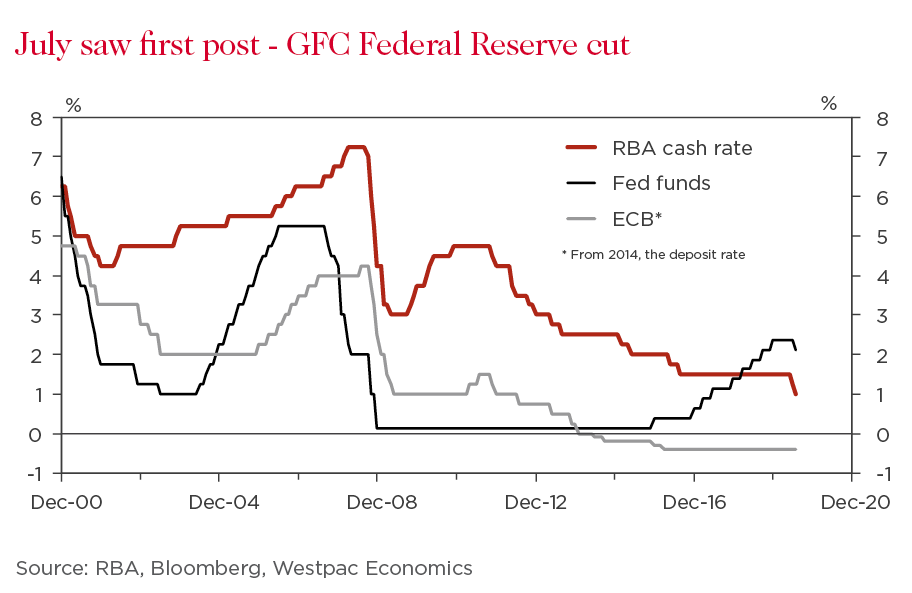 Before the President’s tariff tweet, it wasn’t unreasonable to believe the Federal Open Market Committee, the Federal Reserve body which decides the federal funds rate, would deliver only 50 basis points of cumulative cuts over the coming year, rather than the 100 basis points the market had priced.

Supporting this view, Chair Powell and the Committee believed last month’s rate cut (and the one that had been expected to follow by year end) could not be assessed in isolation. Instead, they had to be taken together with the progressive shift in the Committee’s stance, from signalling more rate hikes at the end of 2018 to cuts at June 2019, materially easing financial conditions.

To give context, at the time of the July meeting, the yield on US 10-year Treasury bonds had fallen from around 2.8 per cent in December to near 2.0 per cent while the S&P500 stockmarket index had risen circa 20 per cent. Similar trends had been seen in Australia and elsewhere – yields falling to record lows and stockmarkets touching record highs – amid a global shift to policy easing by central banks. It’s worth noting that the Committee and Chair Powell viewed the US stockmarket’s surge as consistent with fundamentals, rather than market exuberance over lower rates as some other observers did.

The other support for the “mid-cycle adjustment” view was that the Committee’s baseline expectation for the economy remained robust and inflation was “most likely” set to return to its 2 per cent target.

To trigger a long series of rate cuts, Chair Powell revealed “real economic weakness” instead needed to be seen.

To our mind, President Trump’s tariff decision is the catalyst for such an outcome.

Prior to the new tariffs, we thought the trigger for the Federal Reserve to shift its stance would be the passing of current (or future) weakness in business investment into employment and wages, and consequently to household consumption. Through further weakness in world growth and persistent global uncertainty, the increase in trade tensions has crystallised these downside risks for the US economy.

While June quarter US GDP growth last month came in ahead of expectations, rising 2.1 per cent annualised, it was clear that part of the strength was pent-up demand from the prior three months when the weather and the federal government shutdown curtailed consumption. Also, business investment remained weak, with quarterly growth in the first half a fraction of that seen immediately after President Trump’s 2017-18 tax and spending initiatives.

All told, rather than our previous forecast of 50 basis points of cuts in the next 12 months, we now expect three more cuts – in September, October and December – to take the federal funds rate to 1.375 per cent.

As we’ve seen in recent weeks, global uncertainties are unlikely to dissipate any time soon. With flexibility up their sleeve, the Fed is likely to get ‘ahead of the curve’.