Chairing a sold-out CEDA event in Western Sydney last week, it was striking how much enthusiasm there was in the room.

At a time when the broader economy has slowed, the room was brimming with members of local government, communities and the private sector there to hear from NSW Minister for Jobs and Investment, Tourism, and Western Sydney, the Hon. Stuart Ayres about plans to transform the region.

In fact, it’s set to be one of the fastest growing regions in Australia – creating 200,000 jobs by 2038. The 24-hour, curfew free airport will be the game changer to support development of industries such as aerospace and defence, manufacturing, healthcare, freight and logistics, agribusiness, education, research, and tourism. Over the next twenty years, the growing centres in Western Sydney are forecast to need 184,000 new houses, bringing with them retail, cinemas, restaurants, entertainment, sports and plenty of small business opportunities.

What’s unique about the Aerotropolis project, which forms part of a larger $20 billion infrastructure commitment by 2026, is that it has the unprecedented unified commitment from federal, state and local government.

This should be celebrated. 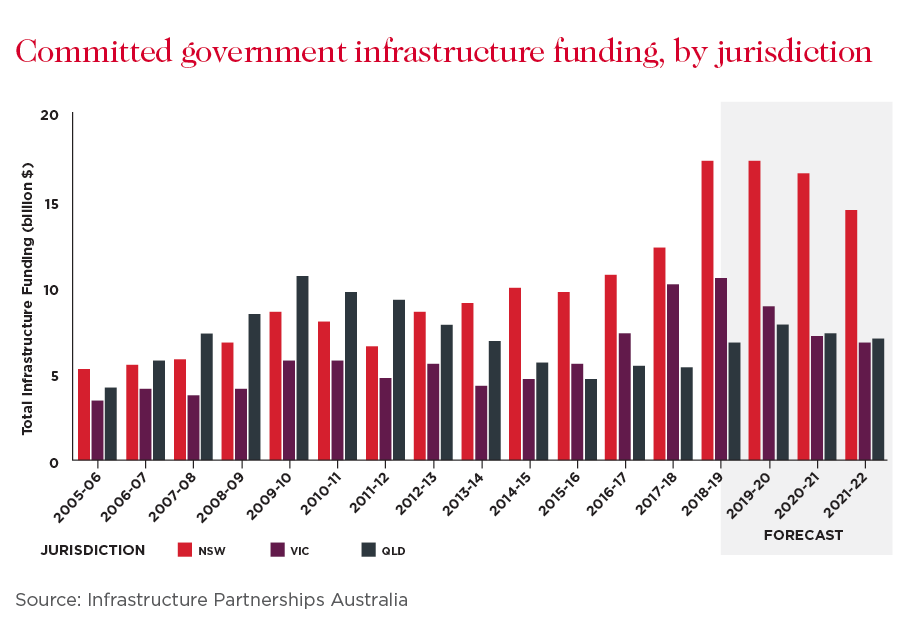 As the Reserve Bank Governor has repeatedly suggested, there has arguably never been a better time to invest in infrastructure that boosts the nation’s productive capacity and supports domestic demand given interest rates have never been lower. Where projects deliver reasonable returns, borrowing to fund them when short and long-term rates are at unprecedented low levels makes sense and would support the broader economy going through massive structural changes driven by mega trends such as technology advances, rapid urbanisation, climate change and demographics.

Given the time lag and costs, picking the right infrastructure projects is key. But as we’re seeing in Western Sydney, market demand is there.

The overwhelming message when I regularly speak with domestic and multinational corporates, and institutional investors is that they are all eager to be involved in Australia’s infrastructure pipeline. Our stable legal and regulatory framework, enviable track record for asset recycling and unquestionably strong banking system cannot be underestimated. For Western Sydney specifically, clients are lining up to understand how this sprawling growth precinct is emerging.

In fact, over the life of the developing city, Westpac estimates the opportunity to be in excess of $100 billion – financed through a mix of private and public sources. We also expect public assets will be recycled in order to keep pace with development requirements given the New South Wales Government’s track record in this space.

But to successfully attract private sector investment, this future city must have the right mix of planning, connectivity and sustainability across projects.

The concept of a “city deal” with all three levels of government (federal, state and local – including eight councils) committed to one masterplan is an enormous feat. With zoning to be released later this year, it’s good news for the private landholders, many of whom have held the land for years – some are also intergenerational.

A challenge ahead will be pleasing differing landholders’ interests. While governments are highly motivated to partner with them, what we need is a single overarching governance structure to help investors and developers navigate policy design with a clear planning approval process. Nothing will stifle investment like complexity and no clear decision-making authority.

Pleasingly, a lot of this planning is already underway.

The state government is committed to ensuring that people from the local area and those who find it hardest to find a job are employed first – with a strong focus on local and minority employment. There is already $5bn to upgrade three big hospitals over the next four years to assist pent up demand for healthcare, one of the biggest employment sectors.

Planning ensures the agribusiness sector is catered for, through a 24-hour logistics pipeline to get fresh produce exports onto planes across the Asia Pacific.

The government is also thinking differently about construction and infrastructure, requiring developers to use best practice “Urban Form” from day one and put the concept of “walkability” at the heart of all design. People won’t need to use a “pint of petrol” to buy a “pint of milk” and will have access to train stations to ensure commutes of 30 minutes to work, homes and schools.

Greater Western Sydney has the third largest economy in Australia, but we need to ensure a modern connected economy is built rather than an isolated region on Sydney’s outskirts.

For example, The Grattan Institute found commuters are less willing to use public transport if the trip is more than one hour.  Current planning of a North South Rail Link will result in a long commute of at least 1.5 to 2 hours from the Western Sydney Airport to Parramatta and Sydney’s CBD. We need to ask ourselves - is this fit for the future?

But connectivity is not just about physical transport links in an increasingly digital economy.

Our research with the Root Partnership has found as the population grows and new developments arise, “smart houses” will be increasingly connected via the internet of things and highly energy efficient while the latest technology will assist plans for high performance secondary schools, TAFEs and universities.

Positively, the Western Sydney project is already thinking about and planning for 5G technology and agile design to foster greater connectivity.

Finally, in creating a new city it must be fit for the future – and that’s why sustainability is so important.

The imminent threat of climate change means we need cost-effective, low carbon solutions, not just across the energy sector but all industries including manufacturing, transport and agriculture. For banks like Westpac, we have a role in providing and disintermediating finance to back those solutions and support the transition.

And these financing markets are only growing.

Despite the nation’s economic challenges, it’s an exciting time for nation building. And if we prioritise the key ingredients of streamlined planning, connectivity and sustainability, the level of investment and job creation will drive productivity, boost living standards and support broader growth.

As Australia’s first bank, the Bank of NSW founded in 1817, Westpac is committed to playing a key role in supporting government infrastructure agendas and connecting customers to the opportunities at a critical time for the economy.

There’s clearly a lot to brim about, if we get it right.