In financial markets, it’s been hard to escape debate about the recent fall in bond yields to record low levels and “inverted” yield curves.

It has been pretty extraordinary.

Since hovering around 2.79 per cent less than five months earlier in November, the yield on 10-year Australian government bonds hit an all-time low of 1.72 per cent on March 28. Yields fall when the price of the bond rises, suggesting a rush of demand for the inherent safety that a security backed by the government provides.

Yields on 10-year treasury bonds in the US – one of the most closely watched markets globally – have also fallen to levels suggesting pretty extreme valuations. In fact, the “3m-10-year” yield curve even recently inverted – meaning the yield on 10-year bonds fell below three-month pricing – for the first time since August 2007, bringing renewed focus on recession risks and generating global headlines given its enviable track record of predicting upcoming ructions. 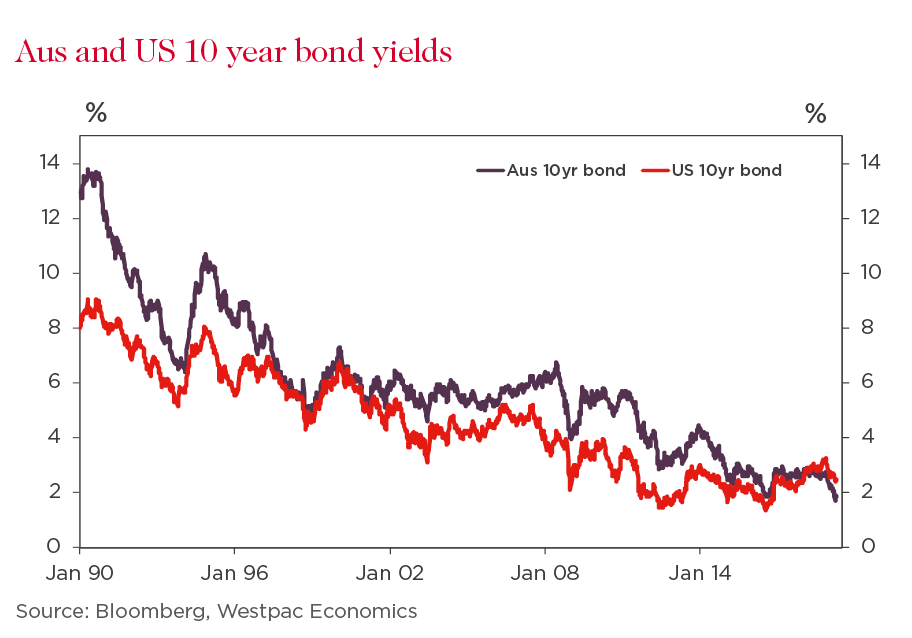 Using a recession probability model, our research shows that since 1970 the inversion of this yield curve occurred before all seven US recessions between 1970 and 2008-2009. And it’s showing the probability of a US recession in the next 12 months is a relatively high 20 per cent.

So, what is going on given still relatively positive economic signals?

In Australia, there has been a marked adjustment in the market’s expectations. In the short-term, markets have fully priced in a full 25 basis point rate cut by the Reserve Bank by August and suggest another cut in the following six months is likely, a big change from last year when higher rates were being factored in.

There’s lots of reasons for the abrupt change on rate expectations.

Firstly, while the economy continues to perform OK, there was a marked slowdown in GDP growth in the second half of last year, to an annualised pace of 1 per cent. The RBA and investors are also concerned about falling house prices and whether that weighs on already soft consumer spending, not to mention the ongoing lack of signs of building inflation, despite the strong jobs market. Like other countries, little ongoing real wages growth is a big issue.

As RBA Assistant Governor Luci Ellis said a few weeks ago: “For a little while now, the team at the Bank has been grappling with how one might reconcile apparently weak national accounts figures with the noticeably stronger labour market data. The disconnect can be traced to the household sector.”

Not long after, the RBA Governor changed the final sentence in his cash rate decision statement for the first time since September 2016, suggesting the prospect of a cut was more “live” than prior months.

All of these developments are weighing on medium and long-term inflation expectations, in turn spurring demand for 10-year government bonds and lowering yields.

Somewhat similarly in the US, the major catalyst for the yield curve inversion was the Fed’s recent “dovish” surprise, including implying its rate hiking cycle was over. Forward policy expectations quickly shifted to an around 80 per cent chance of a rate cut early next year. Long term bond rates fell faster than short term interest rates and in late April the US 3m-10-year curve inverted. 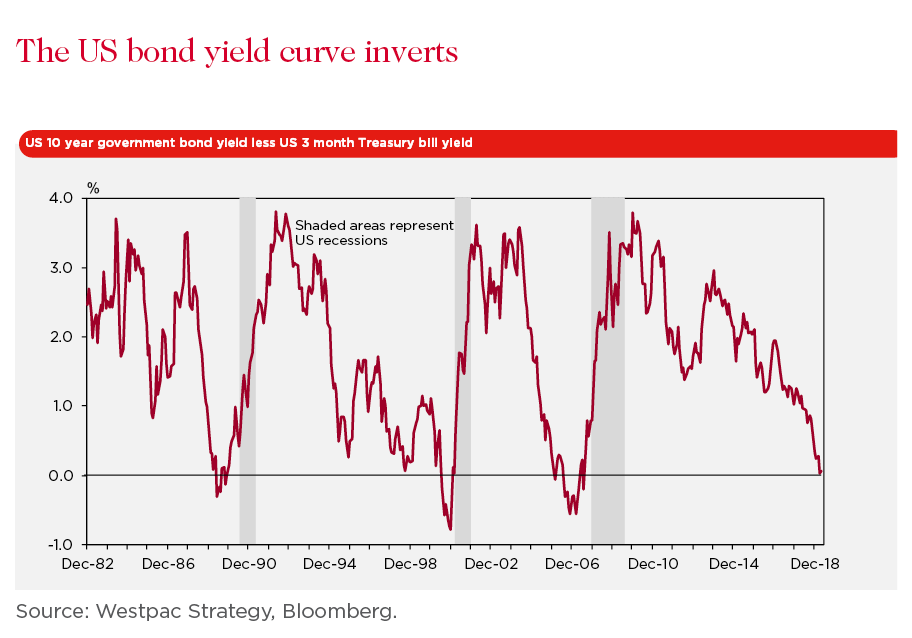 The curve has since stabilised; the 10-year rate is hovering about 5-10 basis points above the 12mth rate but it remains overall very close to inversion.

Yet there are reasons to question whether “this time is different” and the yield curve inversion may not signal a looming recession this time around. For one, since the global financial crisis, the US Federal Reserve and other central banks have pumped trillions of dollars into markets through “quantitative easing”, creating liquidity never seen before that has to find a home and may be distorting historical signals.

Indeed, as our research shows, when other recession predictors are included in the mix, such as the stockmarket, spreads on corporate debt and manufacturing surveys, the risk of a US recession in the next 12 months falls to a negligible 5 per cent, hardly flashing red.

But given the many uncertainties and risks swirling around markets, it will be important to watch bond yields and the curve – particularly if it inverts for an extended period, given this increases the probability of recessions.

They may be a little less visible or as understood as equities in Australia, but bond markets have a habit of being useful indicators of times ahead.