The latest cog in a brilliant long-term strategy or strangely underwhelming for a company that has revolutionised several industries?

Opinion was mixed on Apple’s recent push into the credit card market.

“At Apple’s product launch event on Monday, Tim Cook, chief executive, said that the Apple Card would be the biggest card innovation ‘in 50 years’,” the Financial Times’ chief editorial writer Robert Armstrong wrote in late March. “From what we know about Apple Card so far, however, it does not have any single feature that sets it apart from what card issuers, card networks, or fintech companies already offer — with the exception of a slick-looking titanium card with no number or expiration date.”

Others, of course, have been more taken by the simplicity of a card designed to complement the Apple Pay digital wallet and appeal to some customers’ distaste for fees or apathy towards reward points (The card offers cash back instead).

Regardless of your view, Apple’s expansion in financial services is part of a far bigger story, according to a new paper from the Bank for International Settlements released this week that explores the economic forces driving “Big Tech’s” financial services forays and consumer benefits. But pointedly amid rising scrutiny globally of the tech giants’ power and operations, the authors also raise questions around the risk of further concentration, more systemic cyber-security events, conflicts of interest and regulation.

“To date, Big Tech firms have pursued a well-worn strategy of broadening their activities in finance,” the paper notes, describing the trend as “one of the most notable developments in recent years”.

“They often start with payments, in many cases overlaying such services on top of existing payments infrastructures. Increasingly, thereafter, they have expanded beyond payments into the provision of credit, insurance, and savings and investment products, either directly or in cooperation with financial institution partners.

“Big Tech firms may enhance competition and financial inclusion, particularly in emerging market and developing economies, and contribute to the overall efficiency of financial services. Conversely, such firms may further concentrate market power or even give rise to new systemic risks.”

To explore the issues, much of the report, BigTech and the changing structure of financial intermediation, focuses on China, the world’s largest fintech (financial technology) market and most penetrated one by Big Tech giants like Alibaba and Tencent.

It cites how Alibaba’s Ant Financial has grown Yu’ebao, or “leftover treasure”, a mobile money market fund (MMF) where customers can invest as little as 1 RMB (20c), into the largest in the world within five years with 1.7 trillion RMB ($371 billion) assets under management. In payments, Alipay and WeChat Pay now control 94 per cent share of the mobile payments market. Ant Financial and Tencent also sell insurance on their platforms from both third parties and their own brands.

How have such staggering statistics arisen?

“Big Tech firms can exploit their existing networks and the massive quantities of data generated by them. They can then process and use the data including through machine learning models. Because of their digital nature, their services can be provided at almost zero marginal cost,” the report finds.

But China has also had time, the BIS noting it “did not occur overnight” and Alibaba launched Alipay back in 2004 – three years before Apple launched its iPhone that upended the global mobile phone market. The authors add that China’s relatively underdeveloped payments infrastructure in the early 2000s and lack of access to credit and debit cards, and online banking, actually drove them to develop their own systems to solve specific problems in their businesses.

In contrast, developed countries with high penetration of banking services and established payments infrastructure, such as the United States, Europe, and Korea, have had different experiences. While China’s Alipay and WeChat Pay have a combined monthly active user base of 1.4 billion, according to the BIS report, estimates suggest a total of 42.9 million users in the US made an in-store payment in the last six months through Apple Pay, Google Pay and Samsung Pay.

Noting Apple’s push into the credit card market in partnership with MasterCard, the BIS said it continued this theme of Big Techs using incumbent bank-based payment rails. While the BIS didn’t analyse Australia, Big Techs have also mostly leveraged the incumbent payments infrastructure, considered some of the most modern in the world.

“(In China) It took years to develop this infrastructure and for enough consumers to trust technology companies with their finances, before such services took off,” the authors say.

Globally, however, a similarity across markets is clear: relatively little upheaval by Big Tech in credit, partly due to the constraints on some players of accessing funding, the BIS found. Other experts have said Big Tech lack the experience or even desire to become major lenders given the regulations and returns relative to other business. "We see technology companies as the biggest threat to the major banks in the payments industry, but we think they are less likely to target deposit or mortgage markets given the need for a banking licence and funding," Morgan Stanley equity analysts said in a major report on disruption last year.

Even in China, the BIS claims Big Tech’s lending remains less than 1 per cent of total credit – at least for now.

“Other studies note that Tencent and Ant Financial only expanded into financial services like lending and asset management after online payments were well entrenched,” the BIS paper states, noting Ant Financial already lends through three different services including “MYbank”. 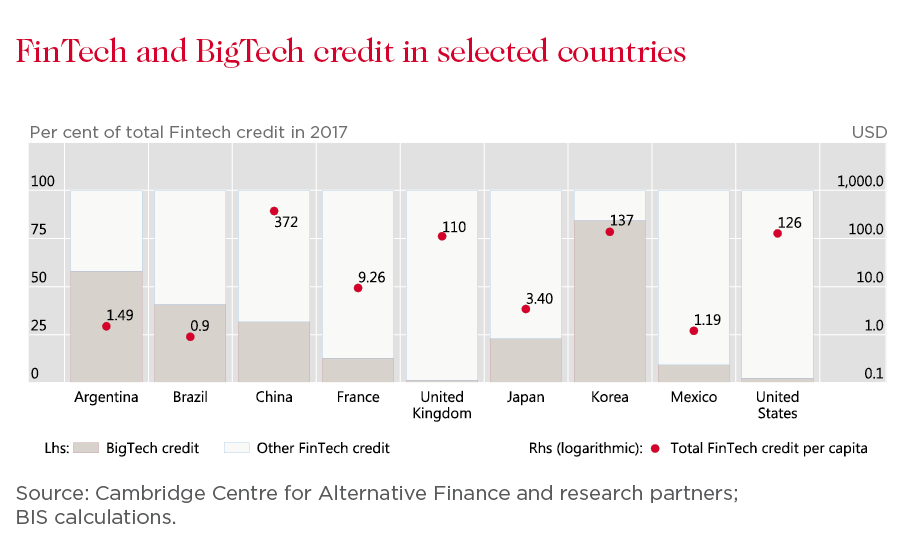 Others are also making more moves through partnerships.

Apple’s new credit card is in partnership with Goldman Sachs, following the bank’s 2016 launch of digital retail banking platform “Marcus” as part of a push into products like savings accounts and personal loans. Amazon has begun a partnership with Bank of America for small business lending, building on more than $US1 billion of direct SME loans to customers in the US in 2017.

In the UK, Amazon has also offered an insurance product for online purchases while Google acquired a Lithuanian banking license in December. China’s Ant Financial’s MYbank recently developed a partnership with a traditional bank to better serve small farmers not on its TaoBao e-commerce platform, according to the BIS.

In Australia, aside from the likes of PayPal providing small business credit, Big Tech’s push so far has also mostly been in payments, Apple, Google and Samsung rolling out digital wallets in deals with banks and card companies (Westpac is yet to offer Apple Pay, but has said it remains open to considering it in the future).

But banks are also making moves on their own, alert to Big Tech’s armies of customer advocates, massive scale and balance sheets (Big Tech companies are the largest companies in the world by market capitalisation).

Bain and Co’s most recent annual global customer loyalty in retail banking study in November found 54 per cent of respondents would trust at least one of Apple, Amazon, PayPal or Google with their money more than banks, potentially translating into a “willingness to try”, particularly among young people. In turn, banks are investing billions of dollars annually on technology and the likes of JP Morgan and Royal Bank of Scotland have established their own standalone digital banks at a time when new digital-only “neo banks” are also making inroads.

"These big tech companies are formidable," Westpac's then-chief of consumer banking George Frazis said in late 2017.  "(But) Google and Apple don’t have a monopoly on good ideas or service in a competitive market."

New competition is undoubtedly positive for consumers, as noted by the BIS.

However, there could be “less desirable” consequences in “welfare terms”, particularly if “regulatory arbitrage or additional risk-taking were key drivers”. Echoing other studies, the BIS authors warn of further concentration risks, but also raise questions around how Big Tech firms fit within financial regulation frameworks and potential issues from also being major suppliers to banks. It singles out Amazon Web Services as the world’s largest provider of cloud services, plus major players Microsoft, Google and Ali Cloud, as they also become bigger financial services providers themselves.

“The activity of Big Tech firms as both suppliers to, and competitors with financial institutions raises a number of potential conflicts of interest, at the same time that their dominant market power in some markets is coming under greater scrutiny,” the paper says.

Locally, scrutiny has also been rising.

The Australian Competition and Consumer Commission is conducting an inquiry dubbed a “world first” into the impact of digital platforms on competition in media and advertising services markets. Facebook has also faced pressure following the horrific recent mass-murder in New Zealand. JPMorgan chief executive Jamie Dimon recently warned Big Tech companies to prepare for inevitable greater regulation like banks faced post the GFC as policymakers zero in on the operations, colourfully arguing they “haven’t had the benefit of the full monty yet”.

As the BIS paper says: “Much remains to be done to address the larger economic questions.”

“The rapid growth of Big Tech services in finance will undoubtedly bring changes that have both benefits and drawbacks, as well as possible risks to the financial system.”

A decade on from the GFC, it seems we are just in the first chapter of what may be the next big banking story.