How much more affordable is housing?

There’s no shortage of talk about house prices. How much further will they fall? When will the market stabilise? Is it time to get in?

What we know is national capital city dwelling prices have fallen 6.8 per cent since peaking in October 2017, led by Sydney and Melbourne following strong prior price booms.

But how much has affordability actually improved?

It’s an important question, not just for potential buyers and nervous sellers. That’s because with the price adjustment in Sydney and Melbourne continuing and demand from property investors unlikely to return soon, an eventual stabilisation of the market depends heavily on the response of owner occupiers to improving affordability – and it seems there’s more to do to generate a lift in demand.

There is little doubt that housing affordability and consumer sentiment towards housing are closely linked. Our previous research established a particularly close relationship between the “time to buy a dwelling” index and an affordability measure that incorporates both deposit requirements and mortgage repayments. Latest readings on both measures show buyer sentiment lifting a little in response to some easing in affordability pressures, although the gap to long run averages indicates affordability is still not back to “normal”. After hitting a seven-year high of 23.3 per cent in late 2017, the proportion of average household income required to finance the purchase of a median priced dwelling has declined to just below 22 per cent in early 2019 to be near the levels seen in late 2016.

That’s partly because many factors feed into affordability with price moves, mortgage rates and incomes key.

In other periods of price corrections, namely the late 1980s and early 1990s, the GFC and the 2011–13 interest rate tightening cycle, falling rates and income growth helped restore affordability.

In contrast, this adjustment is expected to see much less assistance from rates and is occurring against a backdrop of weak income growth, implying that price declines will need to do most of the “heavy lifting” to generate an improvement in affordability.

And there’s likely more lifting to do, even though Westpac now expects the RBA to cut rates help affordability too. 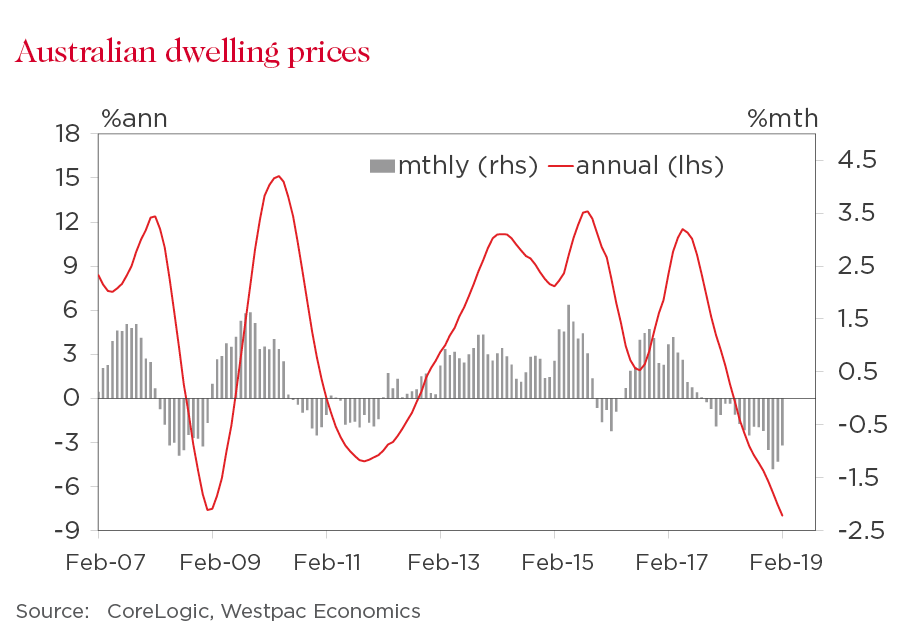 Using some indicative estimates of how much further prices may need to move by looking at the price change required to return affordability to its 20-year average points to about a further 5 per cent decline required nationally. In NSW and Victoria, more substantive moves in the 5-10 per cent range are likely to be required, while other states should require milder moves.

While the picture differs across cities, and between houses and units in most cases, price adjustments in the key Sydney and Melbourne markets still look to have some way to run.

That will be disappointing for those hoping for stabilisation to emerge but will be encouraging for those looking to get into what were previously very expensive markets.