Sounds like debates raging in Australia. But these issues are also key to the outlook for China. And there’s undoubtedly worrying signs and risks.

In late 2018, annual growth in China decelerated to a rate reminiscent of the GFC low of March 2009. Unsurprisingly, financial markets are concerned about the economy’s prospects in 2019 and beyond amid trade tensions and slowing global growth.

But it’s important to note that while a broad-based slowdown from deteriorating export demand across manufacturing and – to a lesser extent – services is evident, the key determinant of China’s softer growth has actually been structural change – planned and managed by China’s central government.

Put simply, in pursuit of long–term financial stability and sustainable growth, China’s economic authorities in the past few years focused on the quality of growth, particularly its longevity, environmental impact and reducing wealth inequality.

Given this is at the core of the slowdown, we aren’t as bearish as some observers about the outlook, anticipating GDP growth will be sustained around 6 per cent.

Amid much discussion about “trade wars” and tariffs, it’s worth remembering that the US only receives about 20 per cent of China’s total exports. Put another way, China has considerable scope to grow total goods exports even if US/China trade tensions persist. And the stronger these regional trade linkages become, the greater China’s opportunity to benefit from the export of services as well, particularly education, tourism and business services.

The massive “Belt and Road” initiative will further stimulate these linkages and provide opportunities to diversify China’s export base. Fostering greater education attainment and entrepreneurialism to make ready the workforce for the opportunities to come will be important. 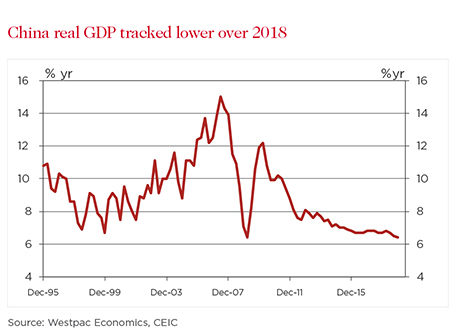 It may surprise some people, but China has developed to the point where it can offshore low-value production to neighbouring countries where wages are lower, bolstering the drive for regional integration. The additional benefit is three-fold: lower production costs maximise the profit that flows back to Chinese investors; production abroad offers firms an opportunity to skirt US tariffs which only apply to exports from China; while capacity is created domestically to develop new industry, which will generate higher income.

These trends have been clearly evident in the investment detail.

The central government’s push for investment decisions to be judged on economic worth saw growth in fixed asset investment across the economy slow to a historically weak annual pace in 2018 of 5.9 per cent, as investment by state-owned enterprises (SOEs) effectively stalled at 1.9 per cent. All of a sudden, historically-troublesome forms of investment, such as poorly-planned infrastructure investment by local government authorities, was sharply curtailed.

But with this one-off initial re-orientation of the economy towards quality having been achieved and overall GDP growth having slowed, authorities are increasingly acting to boost momentum and new investment.

This is happening on two fronts.

First, local government authorities are being encouraged to accelerate their infrastructure plans. But these projects are slated to be funded by new bond issuance – in effect seeing investors act as a check on the quality of investment.

Secondly, the availability of funding to the banking system is being increased materially and its cost reduced, resulting in flow-on benefit to end borrowers. Banks are being encouraged to focus on up-and-coming industries, where there is maximum long-term benefit for China, while loan availability for established businesses and the household sector is also being supported.

However, with risks elevated in the near-term, authorities will likely continue to promote private sector investment. Expected softer growth in consumption – the biggest driver of growth in 2018 – will also need to be closely watched as the effect of US/China trade tensions come to bear on employment and income. As seen in Australia’s February corporate results season, some companies with China operations, such as Blackmores, noted softer consumer sentiment.

But from 2020 and beyond, market forces should increasingly take over as the driver and assessor of investment projects. Increased economic and political engagement within Asia should only help to drive successive waves of investment on and offshore over the coming decade.

New investment and industries should lead to income and wealth gains for Chinese households, providing a strong foundation for increased spending and personal investment. This sets the scene for robust aggregate growth over the coming decade, spread across retail, residential construction and financial assets.

What will be important though is that the gains in income and activity are well spread across the nation, down and up the income spectrum. If this is not the case, then household demand may disappoint as the wealthy accumulate assets rather than spend. Like in Australia, housing remains households’ primary asset, but to preserve affordability and opportunity, house price growth needs to spread across the tiers and be aligned to income growth or risk investors profiting from households down the income spectrum.

Beyond the near-term risks related to trade and expected more modest pace of headline GDP growth, the opportunities from China’s continued development remain plentiful for Australia.

Demand for commodity exports, which represent more than 50 per cent of our total exports to China, is likely to remain strong.

Despite trade tensions, the iron ore price is trading around $US90 a tonne, a multi-year high, following the tragic tailings dam incident in Brazil that resulted in supply disruptions. While prices may fall, China’s continued investment in infrastructure and housing will foster ongoing demand for Australia’s key commodity exports of iron ore and coal, particularly given our position as a low-cost, high-quality producer.

The services sector, which already represents almost a quarter of our total exports, also presents further opportunities. As the incomes and wealth of Chinese households grow robustly in the years ahead, education and tourism in Australia holds great promise. Education, for example, can create deep relationships that further develop the links with China and hence the opportunity to grow business services.

Like in Australia, risks are varied and elevated in China. Given Australia’s high exposure to conditions, nerves are understandably being tested amid heightened global volatility and uncertainty.

But longer term, China may very well manage its economic slowdown and transition better than the doubters and doomsayers expect.