What do Mexico, Korea, Brazil and New Zealand have in common?

They're all growing faster in fintech than Australia. Well, between 2013 and 2016, at least.

According to a new report released this week from the Basel-based Bank for International Settlements – often referred to as the central bankers’ central bank – NZ is flying, recording annualised growth in fintech credit volumes of 668 per cent from 2013-16, the fastest of 27 countries.

Australia – a more developed fintech market -- followed with a respectable but less eye-popping annualised growth rate of 258 per cent. For those napping in recent years, fintech is a glib, new all-encompassing name for the business of putting borrowers and lenders together electronically without the need for a financially powerful intermediary. It includes “peer to peer lending”, various payments solutions, on-balance sheet loans, robo advice and many other things in between.

The secret sauce, so the story goes, is that the fintech entities offering the platform to transactions are able to use new technology to assemble and process vast amounts of borrower information that incumbents often take more time and expense to do.

It has taken off in a big way in China, the US and the UK, but some surprising contenders are quickly jumping on board.

According to the BIS, Korea recorded annualised growth of 617 per cent, Mexico 373 per cent and Brazil 294 per cent. But like NZ’s growth, this is obviously driven by their starting points: in 2013, NZ’s fintech credit was less than $US1 million, compared to China’s $US5.5bn. Even then, China still recorded annualised growth of 252 per cent to hit $US241bn by 2016.

Australia came in fourth in terms of total credit at $US549 million by 2016, which has no doubt grown since.

So, we’re clearly going nicely, but let’s not get ahead of ourselves. By comparison with conventional lending, fintech is still a very small part of the overall lending picture. At June 30, Australian banks had $3.2 trillion of gross loans and advances, according to Australian

Prudential Regulation Authority data, of which the Big Four account for the bulk.

By my fingers and toes, that puts Australia’s entire fintech lending at less than 1 per cent of total bank lending.

But where’s it all headed?

As APRA chair Wayne Byres noted this week in a speech on fintech, not all the established players will survive the rapid change in technology underway, just as Kodak or Blockbuster Video didn’t, and technology investment budgets are likely only heading higher. 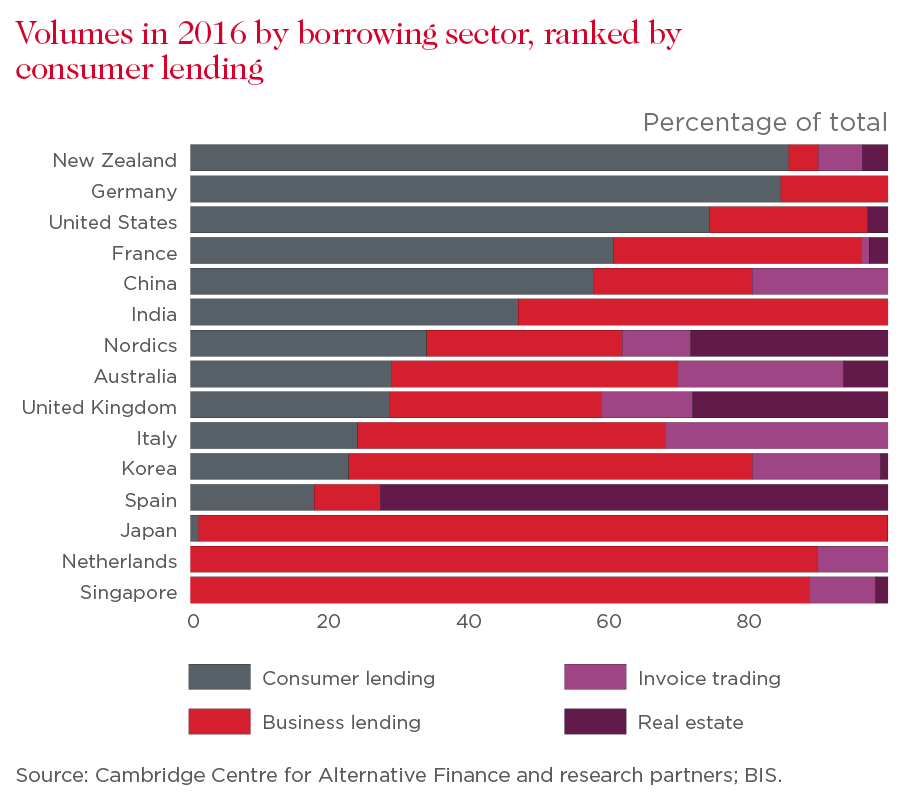 But it isn’t all rosy, the BIS noting that fintech default rates are typically higher than banks, citing Australia and Korea’s recent experience, and investors haven’t been spared “some business misconduct and failures”. Also, lending volumes in China’s booming fintech market had “declined noticeably over the past few quarters”.

Like most of us, the BIS doesn’t claim to know the end game.

And, that fintech “may improve access to credit for underserved segments” of the economy.

That’s a very mixed compliment: suggesting that countries with a highly competitive banking system, tight regulation and broad access to conventional lending won’t see quite as much fintech lending as would otherwise be the case.

Perhaps we should be comfortable not being top of the pops after all.