In the year to June, total deposits grew just 1.8 per cent based on the RBA’s money supply data.

Deposits in the system currently stand at $2 trillion, double the $1 trillion of a decade ago.

For context, the above growth rate is the softest outcome since 1991 and follows sustained weakness in deposit growth from households, corporates and superannuation funds. Over the same period, total growth in credit across the financial system expanded at more than twice that pace, or 4.5 per cent.

Why does this matter?

Put simply, if deposits (in dollar terms) increase more slowly than credit, then Australian lenders’ reliance on wholesale funding must increase. And that’s a particularly relevant fact right now given tighter funding markets, which mean the cost of this funding is higher.

There has been much discussion in financial markets about the recent spike in Australian short-term wholesale interest rates, with international explanations ranging from rising rates globally and US corporates repatriating cash back to the US following taxation changes. But more recently, domestic factors have come into focus, including the sharp deceleration in money supply growth – a function of deposits.

While there is insufficient evidence to label the decline in deposit growth as the prime catalyst for higher wholesale interest rates, it’s clearly a contributing factor. More broadly, it is a signal of the underlying health of our economy.

Firstly, corporate deposit growth is correlated with the performance of the economy. Nominal GDP growth has experienced a protracted period of subdued growth since mid-2012, to which the terms of trade have been key, restricting the flow of new deposits.

Up until late 2015, strong housing turnover and price growth helped offset prolonged weakness in wages growth. But from now on, deposit growth will feel more fully the weight of lasting headwinds from “slack” in the labour market, businesses’ drive for efficiency and globalisation, as momentum in the housing market decelerates. 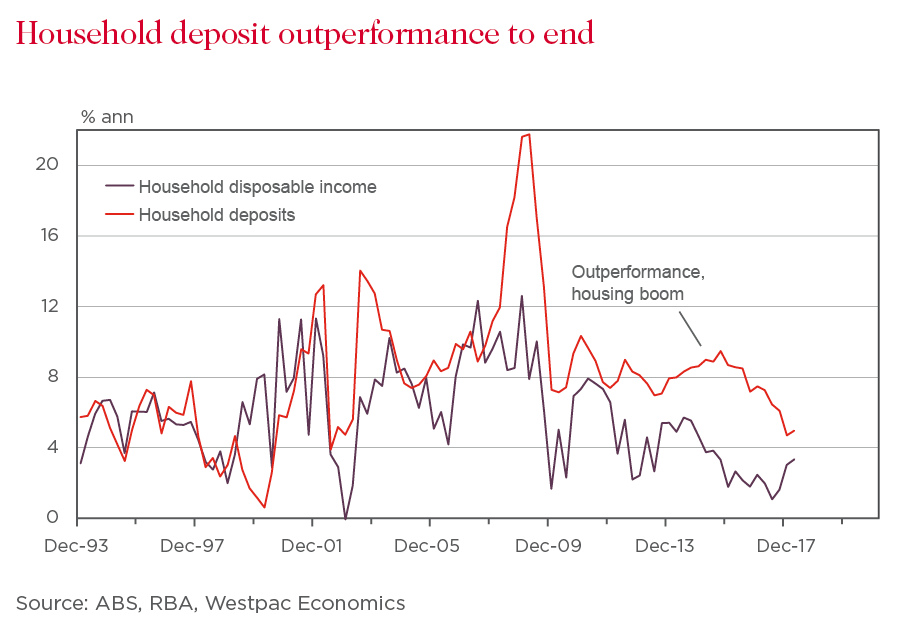 In addition, the outlook for growth in super fund deposits faces the challenge of reforms that limit households’ capacity to make voluntary contributions, and as super funds' allocate out of domestic cash into offshore investments.

The national accounts show households' capacity to save has dwindled with income growth, the so-called household savings ratio falling to 2.7 per cent – the lowest level since the global financial crisis. Moreover, our Westpac–MI consumer sentiment survey suggests that deposits and super are already the focus for household savings, so a sustained reallocation from riskier assets to deposits is unlikely.

A major unknown ahead is the effect of switching from interest only mortgages to principal & interest repayments. The Reserve Bank estimates about $120 billion of interest-only loans will roll over to P&I loans annually in the next three years. Although P&I loans come with a lower interest rate, the total repayment is much greater than the interest cost alone, further weighing on deposit growth. 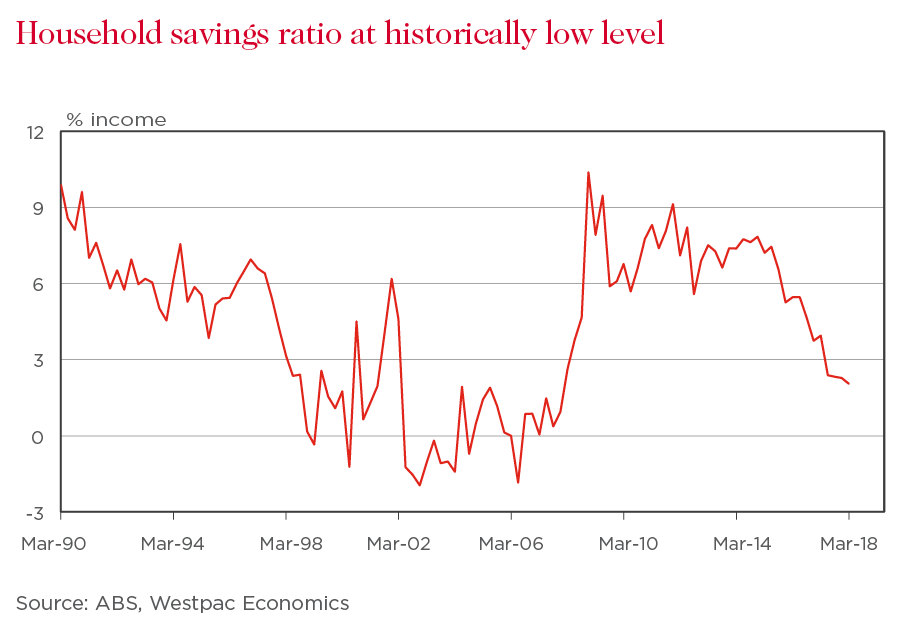 If these trends continue – demand for credit outpacing growth in deposits – then short-term wholesale interest rates are likely to remain elevated and have a greater effect on our economy. As the RBA called out last week, higher wholesale interest rates have already impacted some business interest rates. And, along with stricter lending standards for mortgages and house price declines, we see this as evidence of tighter financial conditions.

It all adds up to a muted outlook for consumer spending, the key determinant of GDP growth. As such, we expect Australian output to slow to 2.5 per cent in calendar 2019, well below the RBA’s anticipated 3.25 per cent growth.

The income and investing behaviour of business and consumers will remain an important indicator of the economy’s health going forward.