Dads on parental leave? Not normal…yet

There are plenty of dads who deserve more socks than me this Father’s Day.

But I did take two months of leave from work when my son Charlie was born last year, and I was genuinely surprised to find out that made me somewhat of a rarity.

Men make up just 4.7 per cent of employees in private sector businesses with more than 100 workers who take primary carers’ leave, and less than a third of those who take either primary or secondary carers’ leave, according to 2017 data from the Workplace Gender Equality Agency.

Clearly, there are a bunch of factors at play in these low numbers.

Top of the list: not everyone works in a company or a job like I do where new dads or partners have the privilege – backed by workplace policies – of being encouraged to take time off.

More than half the businesses WGEA analysed don’t offer paid parental leave at all (besides the mandated government scheme), and only 40 per cent offer secondary carers’ leave which is usually taken by fathers or partners. If you add small businesses to the mix, I’ve no doubt these trends would be inflated.

At the same time, all kinds of lingering stereotypes still float around: that there's no need, no role, nor any value in men taking time off work to look after a newborn.

With the experience still so fresh in my mind, I can’t help thinking that these attitudes and policies are so out of touch.

Don’t get me wrong. As any parent knows, those first few months are like the most crazy out-of-control roller-coaster you'll ever ride. You experience your best days and your worst, and every emotion – from overwhelming joy, to a tiredness beyond belief – sometimes all at once. Reality and time quickly dissolve as you tread the relentless parenting wheel!

But, it’s something I would do again in a heartbeat.

I feel fortunate to have been there alongside my wife, and as a result I’m 100 per cent sure I'm more connected to her and my son than if I hadn’t been in the thick of it.

But, the fact that so many men are missing out on this experience is only one part of the concern.

It also means that until it becomes “normal” for men to take on caring roles – including taking up parental leave and flexible working styles – women’s workplace participation will remain below men and gender equality out of reach.

This is something that governments around the world have started to think seriously about.

While maternity leave rights have been around for a century in some European countries, in 1974 Sweden was the first to introduce paid parental leave specifically for fathers or partners to promote greater gender equality in paid and unpaid work. Today it’s estimated 45 per cent of parents that claim publicly administered parental leave benefits in Sweden are men.

Other countries have followed Sweden’s lead, but parental leave entitlements continue to vary greatly between countries.

Recognising the economic imperative to spread paid and unpaid work between the genders, the Australian government introduced the Dad and Partners Pay Scheme in 2013, where fathers and partners who are primary carers for newborns can claim two weeks’ pay at the minimum wage when their child is born. To date, around 355,000 fathers and other carers had received payments according to Department of Social Services. 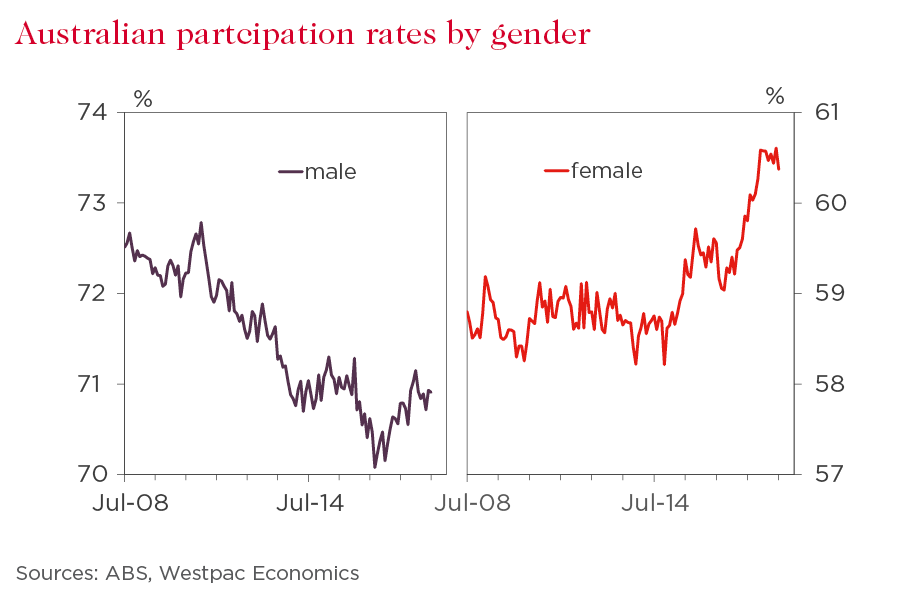 While policies are key, the rubber can only hit the road if men take them up. I’ve come to realise this will only be helped if there were more role models who “normalise” men taking on caring responsibilities and working flexibly – not only for parental responsibilities but all aspects of life – which is something I hope I’ve done.

Charlie actually came four weeks early. For me, this meant dropping everything, literally, and saying to my team, “I’m out!” They stepped up to prove exceptional support me when I needed it most, and they know I will back them when their need for flexibility comes around.

The lack of role models is also a reason I agreed to be part of the “Aussie Dads” photographic exhibition brought to Australia by Parents at Work. Modelled on the original “Swedish Dads”, it shows portraits by acclaimed photographer Johan Bävman of fathers who choose to stay home when their children and explores the reason for their choice.

My hope is that initiatives like this will help shine a light on this issue.

For men and partners, I urge you to investigate and make the most of the support your work can give you and your family, and realise it exists because businesses understand you need this time.

For businesses that haven’t fully embraced this issue, while it may seem difficult, know that resources are available to help find a solution that works for you to support your employees at critical life moments, including organisations like Parents at Work.

When Sindy and I are fortunate to welcome a sibling for Charlie, I know I will have no hesitation in taking advantage of the benefits available and invest more time personally to be with my family. It's a no brainer.

Ross Yabsley is the Group Head of Customer Experience for the Westpac Group. Ross has over 10 years’ experience in financial services, with roles focusing on service, strategy and insights. Husband to Sindy, and father to Charlie, Ross is an adventurous golfer, coffee fanatic and long suffering supporter of Leeds United.

Why walking and talking works wonders for women #diversity

Why walking and talking works wonders for women