Almost 20,000 females joined the manufacturing sector in the year to May, up 12.3 per cent. In the agriculture sector, the number was 9700, representing still solid double digit growth.

These industries are no anomalies: females are joining several sectors at a faster pace than males, including in ones typically dominated by the latter.

Manufacturing, the industry that historically evoked stereotypical images of men in boiler rooms and car factories, has a 72/28 male-female split. But female employment rose 19,400 in the year to May, compared to a 15,200, or 2.6 per cent, gain for males. In mining – even more male dominated at 84/16 – the gain in female employment was an impressive 5600, or 17.6 per cent, a smaller absolute increase than males but far stronger growth rate. Construction was a similar story.

While these gains were smaller than the absolute growth in sectors with a higher proportion of women, such as education and health, it’s a notable development for the labour market.

And there are several cross forces underway, both unknown and others that may be explained. 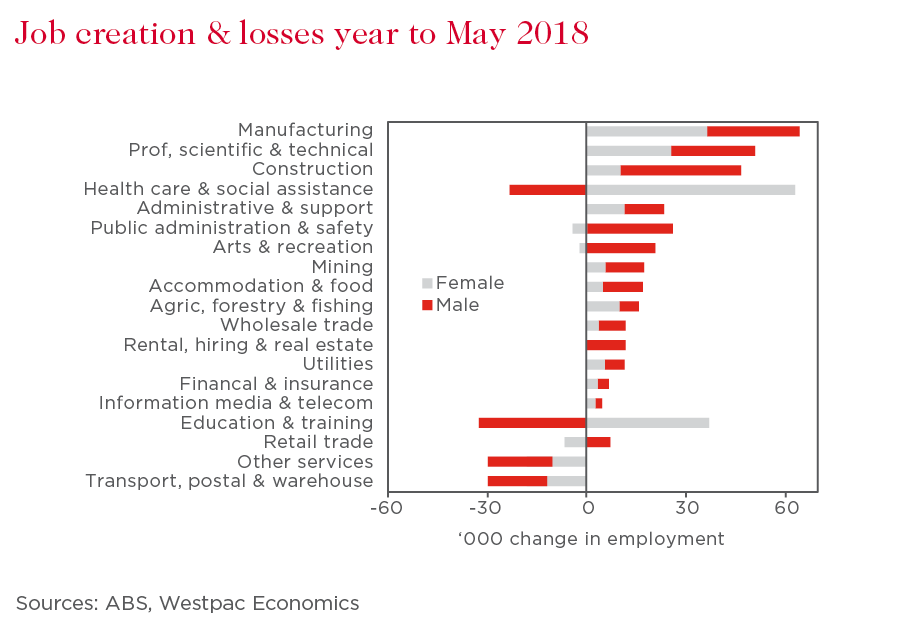 Firstly, more women are entering the workforce, attending university and returning to work after having children than previously. Also, women are working longer and retiring later, so there is a larger pool of women who not only want to work but have the skills to match. This is the natural evolution of policies over prior decades and is a very positive story.

But we may be on the verge of a potential new issue: rising male unemployment.

Over the longer term, the male participation rate has eased to 70.7 per cent from almost 73 per cent a deacde ago as the female rate rose to 60.4 per cent. Over that time, unemployment rates have converged to about 5.4 per cent for both males and females compared to 4 per cent for men in May 2008 and 4.6 per cent for women.

One of the drivers is that jobs many males tend to be attracted to are not growing as fast as the overall labour force at a time of massive change in the economy which, if this continues, will lead to rising unemployment, including for male youths.

It might just be a statistical quirk that reverses, as the data can be quite volatile, but other forces may be at play. What is clear is that rising male youth unemployment, for example, can have significant implications for how economies and societies evolve over time.

In the year to May, the manufacturing and construction sectors remained big job creators overall. Combined, they only just trailed white collar jobs – in finance, real estate, technical and professional, other business services and government – which was the biggest contributor to the labour market at 120,000 employees.

But even in the white collar finance sector, which has a roughly same gender split, female employment outpaced males at 3600 versus 2600. 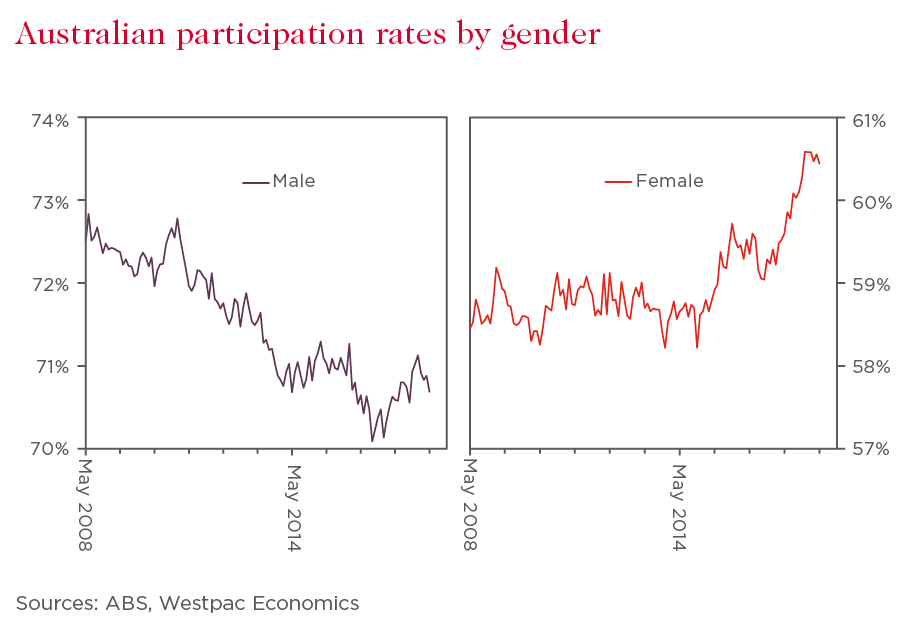 So the outsized recent dip in May of the unemployment rate for males to 5.39 per cent from 5.66 per cent – as participation fell -- has us wondering if we are at the start of another wave of male retirement or something else is going on.

Given the overall soft labour market, we are watching these trends closely.