With economic debate raging in Federal and State government, it is timely to remind ourselves that in the long run, economic problems aren’t solved by government; they’re solved by businesses – usually successful ones.

Take low wage growth, one of the greatest economic issues of today. Businesses invest when they can generate a return, spurring employment and growth.

When employment rises, so too does pressure on wages. Business success is similarly important though not sufficient – for solving issues of income inequality, regional economic disparity, and overall economic growth, to name but a few. It’s hard to imagine Australia prospering without businesses prospering.

The correlation between success for business and success for Australia was one of the reasons we created the Businesses of Tomorrow program last year, supporting companies with the drive to change and boost our nation’s future at a time of rapid technological, economic and political adjustments.

So what’s really needed? As I meet business owners across the country, there are consistent themes restricting growth – and despite what you may often hear or read, for the most part it’s not funding – and they are issues we can do something about.

Corporate tax is one. Interestingly though, tax comes up less than you might think, despite it remaining a topic of much ongoing debate.

That’s not to say tax isn’t important – it’s well established that small businesses cite high taxes as a key barrier to growth, and Australia’s corporate tax rate is very high by global standards. By 2020, it’s estimated that only one OECD country, Germany, will have a higher corporate tax rate than Australia, compared to 19 countries in 2001.

But high tax is not the largest barrier to business investment and success today – regulation is.

According to a recent study by Westpac in conjunction with Deloitte, it was found that regulation – the cumulative impact and the constant change rather than anything specific – was the most significant barrier facing Australian business success today, especially small and medium sized ones. 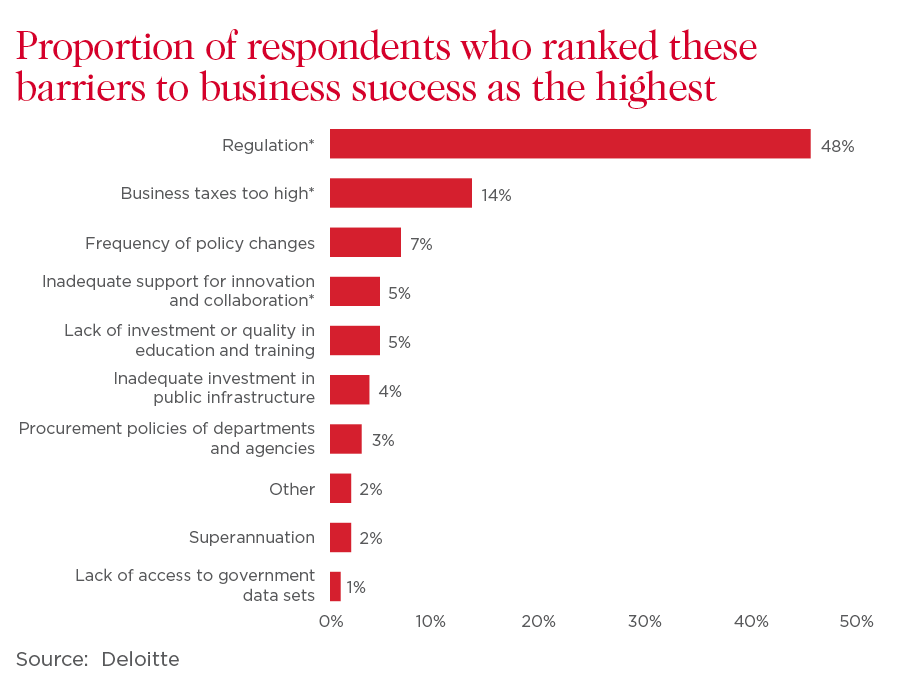 For example, customers expanding nationally tell me about struggles with different approaches by state to payroll tax, workers’ compensation and fair trading laws – yes, most states have very different approaches to these regulations. These are on top of national regulation around Work Health and Safety, hiring, firing and penalty rates – for example, there are 122 penalty rates, and it’s the administration and risk of mistake that looms larger than the rates themselves.  Again, it’s no one regulation that stands out or is seen as unfair – rather how regulation is adding up to a huge burden.

Perhaps unsurprising – but definitely unfortunately – The World Bank’s Ease of Doing Business Index now ranks Australia 14th globally behind countries such as the US, UK, New Zealand, Denmark and Korea.

If business success is important to all of our success, then as a nation, we must aspire to be better than 14th.

According to our Deloitte study, government regulation costs businesses around $94 billion each year – more than the government spends each year on healthcare, transport and communications combined.

Making it easier to do business in Australia needs to be prioritised in order to continue the nation’s 25-plus years of economic growth, and, ultimately, to allow businesses to support solving our most important economic issues today.

This article was first published in The Australian. Westpac’s 2018 Businesses of Tomorrow will be announced tomorrow.

David was appointed Chief Executive, Consumer in April 2019, responsible for all consumer distribution, digital, marketing, banking and insurance products and services under the Westpac, St.George, BankSA, Bank of Melbourne, BT, and RAMS brands. Prior to this, David was Chief Executive, Business Bank from June 2015, after three years as Chief Product Officer for the Group’s retail and business products, as well as overseeing the Group’s digital activities. Before joining Westpac in 2012, David was Executive General Manager, Cards, Payments & Retail Strategy at the Commonwealth Bank of Australia. David was also formerly Managing Director, Strategy, Marketing & Customer Segmentation at Australia and New Zealand Banking Group Limited and Vice President and Head of Australia for First Manhattan.

A modest headwind for a hot housing market – for now

Embrace ‘open banking’ – quickly – or else