In the early summer months of 2012, around $11 billion of home building was carried out. Including both new residential properties, and alterations and additions, it would mark the quietest first three months of a year since the global financial crisis as the global economy struggled to recover.

But builders and tradies needn’t have worried.

On the back of falling interest rates, residential work steadily rose to a peak of $19.7bn in the December 2016 quarter, according to Australia Bureau of Statistics data. During that four-year period, The Reserve Bank cut the official cash rate from 4.25 per cent to a record low 1.5 per cent and national dwelling prices lifted, helped by a boom in Sydney and Melbourne.

Yet a new study has questioned whether periods of rising interest rates have an even more powerful effect on the volume of residential investment than when rates are falling. 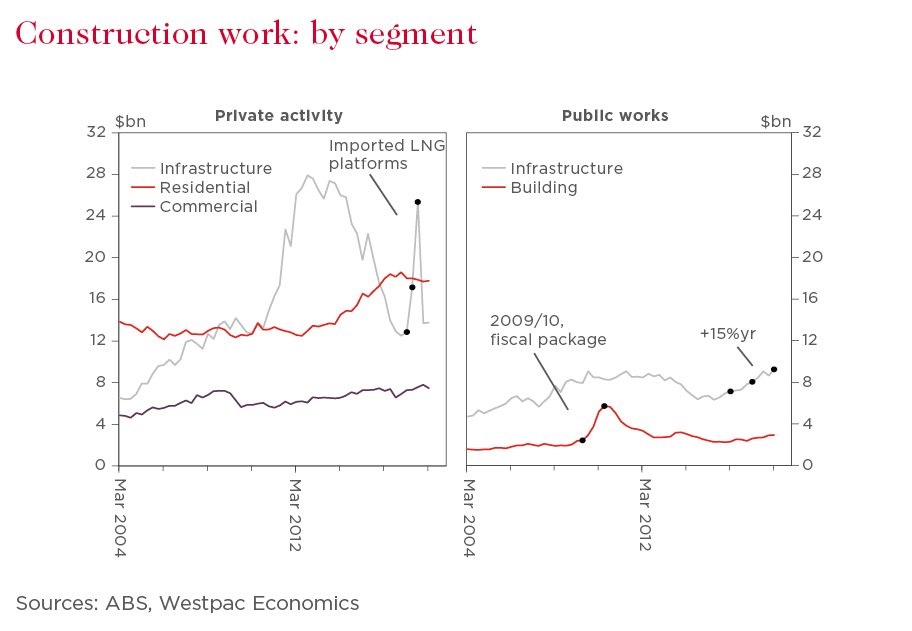 “The effects of interest rates on residential investment are twice as large during housing booms than during the busts, and are clearly stronger when interest rates are rising than when they are falling,” said The Bank for International Settlements working paper, which examined 15 advanced countries including Australia from 1970 to 2017.

The findings come as central banks around the world reassess monetary policy, led by the US, after years of ultra-low – and in some countries negative – interest rates since the global financial crisis. Last week, The BIS’s Committee on the Global Financial System, which is chaired by The Reserve Bank of Australia governor Philip Lowe, also issued a pointed warning that prolonged periods of low interest rates could increase financial stability risks.

“The decade following the Global Financial Crisis has been marked by historically low interest rates. Yields have begun to recover in some economies, but they are expected to rise only slowly and to stabilise at lower levels than before,” the Committee said.

“An environment characterised by ‘low-for-long’ interest rates may dampen the profitability and strength of financial firms and thus become a source of vulnerability for the financial system. In addition, low rates could change firms’ incentives to take risks, which could engender additional financial sector vulnerabilities.”

In Australia, the RBA this month held the official cash rate at 1.5 per cent, marking almost two years since the last move and the longest period of unchanged rates ever. In contrast, the US has been raising rates to 1.75-2 per cent, marking a rare time in history when the “federal funds rate” is higher than the RBA’s cash rate and sparking debate about the impact of higher rates on markets and borrowers after years of accommodative policy. Residential investment is closely watched because, as the BIS research confirmed, declines in activity “consistently lead economic downturns”, despite the study finding it averaged a relatively small 6 per cent share of overall gross domestic product compared with 12.5 per cent for business investment.

It cited Spain, which in the two decades prior to the GFC registered the highest share of residential investment to GDP amid “easy financing conditions that accompanied the introduction of the euro, demographic factors and purchases by other EU residents”. A “long investment slump” then ensued during 2007–14 when residential investment to GDP ratio fell by 5.5 percentage points, almost double the contraction in the US, amid a painful downturn.

“Prior to an economic downturn, house prices, construction activity and construction employment all decline,” said the research, which looked at several recessions including Australia’s last one in the early 1990s.

But since the GFC, Australia has been one of relatively few advanced nations alongside Canada, New Zealand and Norway where the construction sector’s share of GDP had increased due to “housing booms during this period”, the BIS study, released last month, found.

Over the 50 years, the BIS researchers found the biggest drivers of residential investment were house prices, nominal interest rates, housing supply and net migration inflows, factors conducive to Australia’s boom from 2012 to 2017, which peaked in terms of prices in the second half of last year.

But the BIS found several reasons why rising interest rates took a bigger toll on residential investment than falling rates. One was that labour shortages and other costs make it harder to increase construction than cut it during boom periods, thus impacting property prices more than investment levels. Also, higher interest rates tighten funding conditions and probability of default for property developers compared to this being “bounded at zero” when rates were declining.

For Australia, the risk of an imminent spike in the RBA’s cash rate appears low as the central bank continues to flag an extended period on hold, before an eventual likely increase as wages growth and inflation pick up. But in his monthly statement last week, Dr Lowe did call out the notable development stirring global financial markets in recent months: the increase in short-term wholesale interest rates that has pushed up banks’ funding costs and spurred some small lenders to raise mortgage rates.

Westpac senior economist Matthew Hassan said while the RBA clearly “clearly needed to comment” on the developments in wholesale markets, the central bank revealed “little about its thinking” on the issue other than noting it was “more than just a US-led shift”. “The wording and positioning of the comments and other points about wider financial conditions suggest it is not overly concerned (at this stage),” he said.

Mr Hassan reiterated Westpac Economics’ long-held call that the RBA would be on hold for this year and next, noting Dr Lowe has previously flagged a “high bar” to cut rates due to concerns about reinflating asset prices, such as housing.

And as for raising rates, Dr Lowe has also indicated hikes by central banks abroad won’t force the RBA’s hand.

In the US, for example, rates are expected to head higher as the economic expansion – which according to Macquarie analysts has run for 109 months, the second longest expansion since 1855 – continues. Westpac Economics expects the US Federal Reserve to raise rates to 2.5-2.75 per cent by June 2019.

“While some other central banks are raising their policy rates, we need to keep in mind that their economic circumstances are different and that they have had lower policy rates than us over the past decade, in some cases at zero or even below,” Dr Lowe said in an April speech.