The PC’s two year examination of the superannuation system is arguably the most in-depth and evidence-based assessment of the system since its inception.

The PC’s conclusions were clear that whilst superannuation is a fundamental pillar of Australia’s retirement income system, it has deep design flaws that have serious consequences for consumers: The PC has recommended sweeping reform which, if implemented, would benefit consumers $3.9bn each year.

For these reasons, BT Financial Group supports the PC’s key draft recommendation that the government establish an expert panel to select the up to 10 “best in show” funds to help guide consumer choice and that this panel should sit outside of the industrial system. We also support consumers only “defaulting once”, and then taking that fund with them between jobs until they choose otherwise.

Until now, BT has supported an “open market” model in which any Australian Prudential Regulation Authority-approved MySuper product was free to compete for default status as opposed to one where an independent body, potentially susceptible to political influence, is responsible for selecting a shortlist.

The PC’s report, however, provides compelling analysis and has led BT to conclude that a different model is necessary to protect consumers from account duplication, underperforming funds and balance erosion.

Clearly a lot of important detailed design work remains to be done. Nevertheless, we recognise that the report presents a unique opportunity for both sides of politics to agree a bipartisan model.

Overall, we believe these recommendations are in the best interests of consumers. As the custodians of Australians’ retirement savings, all superannuation funds now need to step up to meet the challenge posed by the PC to help create an even stronger system.

In 2015, I gave a speech to the Trans-Tasman Business Circle in which I described the system as being in two phases. The first is the “immature” phase, where most Australians have only benefited from superannuation contributions for a portion of their working lives.

The mature phase, the generation of Australians who will contribute up to 12 per cent of their income for their entire working lives, are the focus of the PC’s report. If superannuation funds are to be trusted with 12 per cent of an employee’s salary, then future generations of Australians must have faith that we have designed the most efficient superannuation system possible. 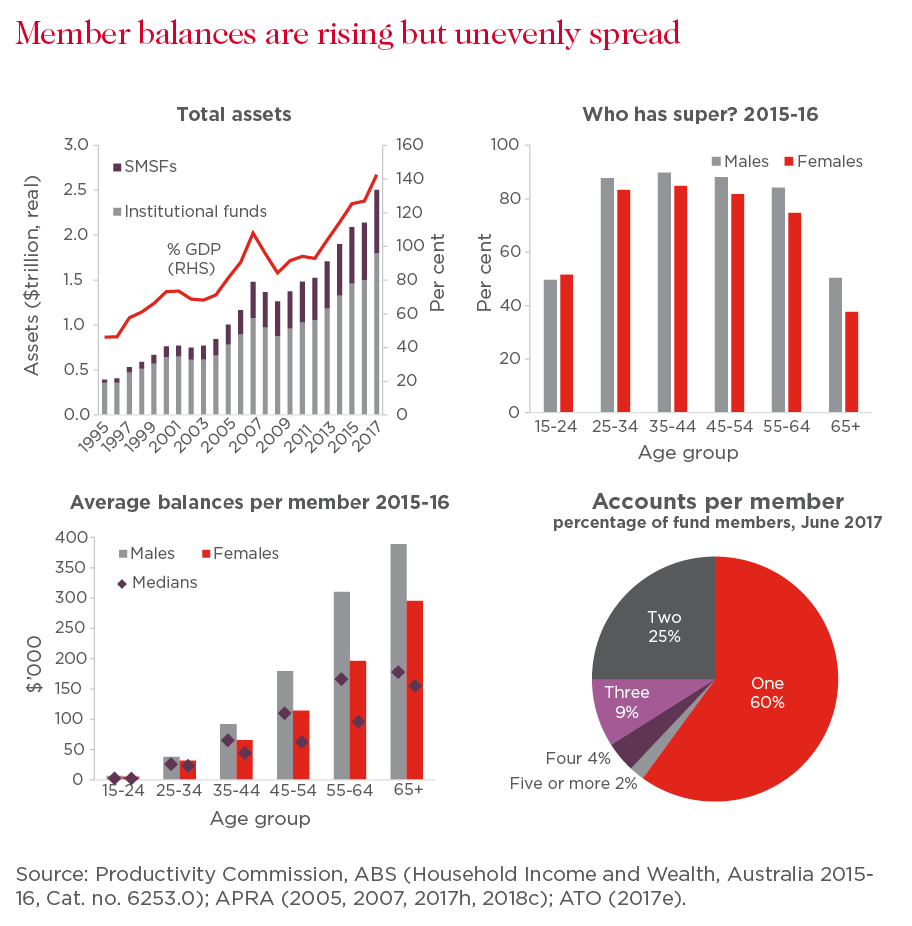 The PC has confirmed that not only is the current default process ill-conceived, but that by design it is inefficient and directs many consumers into the around one-in-three default funds that perform poorly.

The inquiry concluded that small and underperforming products should no longer be in the market and that government reforms are needed to enable permanent capital gains tax relief to facilitate fund mergers.

This reform is necessary and inevitable, and embracing these changes brings the opportunity to significantly lift retirement incomes for Australians.

Any superannuation fund that believes it performs strongly, is well governed and delivers good member outcomes should embrace competition, and by extension, the PC’s proposals.

In its report, the PC has also argued in favour of a suite of superannuation reforms due to be introduced or currently before the Senate, which BT supports. We encourage Parliament move swiftly to pass the announced measures to reduce account erosion through fee capping on small accounts, the ban on exit fees, the need for independent directors on superannuation trustee boards and stronger APRA member protection powers.

Having previously argued in that same Trans-Tasman speech that further wholesale review of the superannuation system should be tied to the five-yearly Intergenerational Report (IGR), I believe that once these legislative reforms are in place, the next IGR provides a ready mechanism to review how effectively they have improved system efficiency and – more importantly – outcomes.

The PC has made it clear to the industry the standard every superannuation fund must meet to rightfully claim they are worthy of default status.

Let’s not let this opportunity to transform the superannuation industry – and in the process lift the retirement incomes of millions of Australians – pass us by. It’s time for the industry to show leadership and for the superannuation system to deliver on its promise.

Brad was Chief Executive of BT Financial Group (BTFG) from 2010 until 2019. Prior to joining BTFG, Brad led the merger implementation planning and integration between St.George and Westpac as the Westpac Group’s Chief Transformation Officer. Brad joined The Westpac Group in April 2007 as the Chief Executive of Westpac New Zealand Limited. Prior to joining Westpac, Brad was Chairman of GE Capital Bank and Chief Executive Officer of GE Consumer Finance UK & Ireland. He drove GE's UK Six Sigma program and was certified as a Quality Leader (Black Belt) in December 2002. He was promoted to Chief Executive Officer of GE Consumer Finance UK in January 2003 and appointed Chairman of GE Capital Bank in April 2004.