GOOD PAIR: The visionary and the stalwart

I still remember the very first question Noel asked me when we met: “So Vit, tell me, are you a mercenary, a missionary or a misfit? They’re the only people that come to work with us in the Cape.”

That was almost 17 years ago. I was in Cairns, alongside a handful of other Westpac colleagues, getting ready to spend six weeks in a remote Indigenous community in Cape York as part of the first ever round of an experimental program conceived by Noel that’s today known as Jawun.

Not in my wildest dreams did I think from that day I’d spend almost two decades managing the program for Westpac, enabling more than 850 employees to take on life-changing secondments, and working in a field I absolutely believe in. That’s all due to Noel’s vision.

When I was preparing for that first round, I came across Noel’s seminal book, Our Right To Take Responsibility, which has essentially guided the activism and reform agenda he’s set through the Cape York Institute. I couldn’t put it down. I was transfixed by the clarity of his explanation of the historical causes of the problems confronted by his people and his vision for overcoming them.

Having lived most of my life in Far North Queensland, I’d been confounded by the enormity of the issues for some time, yet absolutely in awe of the culture, resilience and determination of many Aboriginal people I’d met.

Hearing directly from Noel for the first time, I knew right away his agenda provided the best chance for addressing the wrongs of the past.

Working with Noel has been many things: inspirational, humbling, rewarding, always tough – because of the agenda he’s pursuing and his pace – and sometimes downright scary. His courage amazes me. He will stand up for his principles against anyone, from the Prime Minister through to his own people, if they seek to defend an indefensible position.

He’s also gained a reputation for occasionally venting his displeasure. But what people don’t usually hear is the back story. I’ve seen first-hand that his vents are generally sparked by major setbacks brought about by betrayal or completely unexpected political backflips which threaten to reverse huge advances made.

Noel possesses the finest mind I’ve ever encountered. As a trained lawyer, he could easily have been hugely successful in the legal field or elsewhere in the corporate world. Instead, he’s devoted his life to creating an environment where his people have the same opportunities and the capability to choose the best possible futures for themselves and their families. And I’ve been lucky enough to tread that path alongside him.

Away from the grind and pressures of his work, Noel is a very gentle soul. You need to see him in a pair of old torn shorts, sitting on the step of his shack at the beach on his traditional homelands, playing his guitar, to understand. He could have made it as a singer with that rich voice. 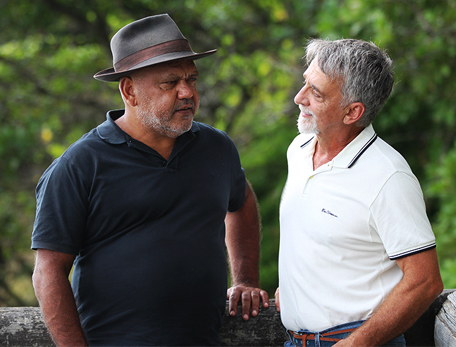 Most people don’t know that Vit’s a banker. They know him as a bushy, a farmer, a fisherman; even a twitcher. But in fact, he’s been with the bank for more than 40 years.

I was surprised that someone from North Queensland, rather than down south, was the first to take up a secondment with us. Having somebody who knew the region, who understood the situation, who could be the point person for our work up there, immediately struck me as a good idea.

We have this idea of what Australia is – we have our Indigenous heritage, our British inheritance, and then the multicultural migration. With his Albanian heritage, Vit is really that third part. That was the thing that first struck me about him. He brings a sensitivity to the partnership that I put down to his migration background. He’s a North Queenslander, but a very thoughtful one.

Vit bought into the vision very early. He respected what we wanted to achieve for our people in Cape York to take charge of our destiny. He respected the leadership; he came onto the same page as us and saw his role as a facilitator of that vision.

From day one, he played a very hands-on role, helping to get our first program – Family Income Management – off the ground. Back then, nobody talked about financial literacy for poor people, so this really was a pioneering program. It became a cornerstone for us, because so many opportunities hang off a family’s ability to take control of their domestic budgets.

Vit taught me some valuable lessons in those early days. He’d developed a very close relationship with a pair of Elders in Aurukun who wanted to save money for a headstone for their son. They wanted this headstone before anything else – before they bought a fridge, sheets, food and pillows. I had to suspend judgement because I didn’t think the priority was right, but Vit intrinsically understood the emotional importance this old pair attached to it, and that it was the right starting place for them.

Getting their headstone became the thing that catalysed family income management throughout the Aurukun community, showing others that it could help them achieve goals – even those that were spiritually important.

The success of that first program was all Vit's doing.

Since then, we’ve reached a whole new plane on our Cape York reform agenda with the help of Jawun secondees. We've built a school, a whole range of social and economic programs, we’ve built the capability of our organisations – our accounting, IT, HR systems – and we're now on a very determined agenda for empowerment. I can sense the upward trajectory.

If I look back, we wouldn’t be here 17 years later without Vit.

Vit has kept the pipeline of people coming through Jawun. He’s been at the nexus point between us and a very large organisation, each with two enormously different cultures. The big wheels in Sydney turn over and the pipeline of secondees come and go, but Vit has owned the partnership at the coalface, providing the continuity to create long term impact.

There's never been a moment that he hasn't been fully committed to our vision. He is a complete stalwart champion of our cause.

Vit remembers me asking him on day one whether he’s a mercenary, misfit or missionary. After 17 years, I’ve come to think he's a combination of the three.


Cape York Aboriginal leader, Noel Pearson is the founder and patron of Jawun Indigenous Corporate Partnerships. The program started in 2001 with two corporate partners – Westpac and Boston Consulting Group – seconding employees for six weeks in Cape York. Since then, almost 2750 employees from 50 organisations have participated in Jawun secondments in Indigenous community organisations around Australia, sharing almost 310 years’ of combined effort.