‘Storm in Trump cup’ may be just the start

In 1930, the US reportedly raised tariffs on imported eggs from US8c to US10c. Onions were slugged even harder, up from US1c to US2.5c.

Almost 90 years on, the world is contemplating a fresh “trade war” after US President Donald Trump earlier last month followed through with tariffs flagged during his election campaign. China this week hit back with proposed tariffs on more than 100 products including soybeans, a move experts claimed was notable given the potential blow to US farmers if talks between the two nations failed. Ironically, Republican congressmen Reed Smoot and Willis Hawley in 1930 also fed on workers’ unrest about jobs in the wake of the 1929 stockmarket crash and increasing competition to push through the tariffs of eggs, onions and other products. Overnight, tensions flared up again after Trump threatened to intensify measures aimed at China.

If the Smoot-Hawley Act in 1930 is any guide, markets may be rattled for good reason.

Originally planned to raise tariffs on some agricultural products, it snowballed to hundreds. Global trade sank as other countries retaliated and the great depression deepened.

“The best example of the negative impact of trade wars is Smoot-Hawley Act,” veteran Bell Potter trader Richard Coppleson wrote in his daily report on March 7, referencing a 2016 CNN story on the impact of the Act. “This is what we don’t want.”

A month on, investors remain on edge.

In March, the MSCI World Index fell 2.4 per cent, feeding into the worst quarter for the global stockmarket since September 2015, according to Ord Minnett, amid fears for global trade and pressure on technology stocks such as Facebook in the wake of the Cambridge Analytica scandal. Australia’s S&P/ASX 200 wasn’t spared, sliding 4.3 per cent in the worst monthly performance since January 2016.

Meanwhile, credit markets are also adjusting, the Reserve Bank of Australia this week noting the recent spike in US dollar interest rates that “has flowed through to higher short-term interest rates in a few other countries, including Australia”. While experts claim the tightening of financial conditions is likely more reflective of a decline in liquidity as after the recent US tax changes allowing US corporates to repatriate funds from foreign jurisdictions, volatility has lifted across markets and more may be on the way.

Rob Rennie, Westpac’s global head of market strategy, says the issue is whether President Trump was kicking off a longer term push to even up “unfair” trade for domestic political motivations or using tariffs as a negotiating tool. “I think there is a bit to be said for this being the art of the trade deal rather than the end of global trade as we know it,” says Rennie, whose seen a few trade tiffs in his 30-odd years in market at Morgan Stanley in London and Westpac.

“And we’ve seen situations where there’s been an eruption of short term trade wars which really were part of a negotiation process. I remember tariffs being slapped on Japanese automakers in the 1990s by US trade rep Mickey Kantor…but what the Japanese agreed to do as part of the end of those tariffs was open up US access to the Japanese auto market.

“So you could say exactly the same thing is happening again. But what I’m concerned about is whether this is Trump trying to replicate Reagan’s moves or it is part of a much deeper rooted sense that the US has been significantly left behind.

“And if so, it would be a significant shift from the policy developments we’ve been used to for the past 70 years because we have had a rules based approach to trade disputes since WW2.”

Trump fired the first shots early last month with proposed tariffs of 25 per cent on imports of steel and 10 per cent on aluminium.
The moves were widely viewed as focused on China after flagging to exempt several countries including Australia, confirmed when Trump subsequently unveiled a three-part trade policy focused on China that included tariffs on around $US50bn of imports. It was also notable for not playing by the rules and bringing a case to the World Trade Organisation after Trump used his powers under section 232 of the Trade Expansion Act of 1962 to flout them, Rennie says.

The trade war, it seems, was on. Or, is it more of a battle?

Morgan Stanley’s strategists last week played down risks of a “full blown” trade war, arguing President Trump was using tariffs as a negotiating tactic to get China to reduce “unfair” suspected trade practices and “monetise” the US’s $US375 billion trade deficit with the rising Asian power. Westpac senior economist Elliot Clarke also notes that China was clearly seeking a diplomatic solution, despite having significant power to introduce wide-ranging tariffs and tightly control investments in their economy. As the largest foreign holder of US Treasuries, last but not least is China’s capacity to affect US borrowing costs, Elliott adds. 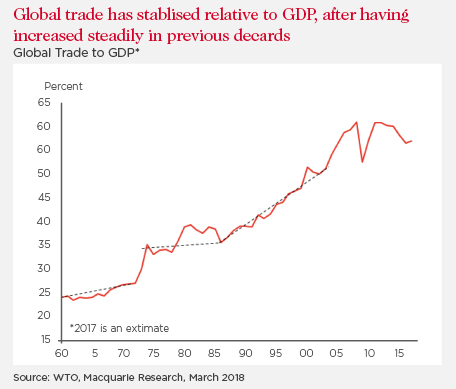 Other experts, such as Macquarie’s investment strategists, have added that trade protectionism had already been rising in the past decade post the global financial crisis, going as far to question if it’s all a bit of a storm in a “Trump cup”.

“De-globalisation has been a fact of life for more than a decade,” they wrote last week in a note exploring how investors were having to wade through increasing “noise” such as Trump’s tariffs and the recent Facebook data scandal in their search of “order”, despite there no longer being any.

“There are already (around) 50,000 cases outstanding with World Trade Organisation, with members introducing various anti-dumping duties & non-tariff measures. This is more than double the case load of ’08, and it is bound to grow exponentially; the US is not even the greatest offender.

“The liberal trade order had died at least a decade ago. Second, global economy is no longer driven by conventional trade…atrophy of supply chains and dominance of technology in trade flows are the key.”

But beneath the surface, Rennie says things are quietly shifting.

The Australian dollar has weakened against many G10 currencies. And the “curve” showing the difference between yields on 2-year US treasuries and 10-year treasuries last week flattened to below 50 basis points from 100 basis points a year ago, marking a 10-year low. “That’s not something the average investor would look at on any given day, but to me the US curve flattening to the lowest level we’ve seen since 2007 is significant,” he says.

Longer term, Rennie says there are risks around the “tectonic plates of global trade” - the US and China – heading in different directions, citing the latter’s push for greater trade via the “one belt, one road” initiative focused on infrastructure and opening up major trade routes that could increase the use of the yuan in the long term.

He also notes that global trade had only just recovered from the slump in the wake of jitters surrounding China’s devaluation of the yuan and lingering concerns about Europe’s recovery in 2015. More recently, South Korea agreed to quotas that reduce steel exports to the US, contravening WTO regulations. Australia then quietly announced through the anti-dumping commission an increase in tariffs on imported steel, all of which Rennie says were further signs that the rules-based system that began with the General Agreement on Tariffs and Trade (GATT) in 1948 is breaking down, or at least being significantly tested. 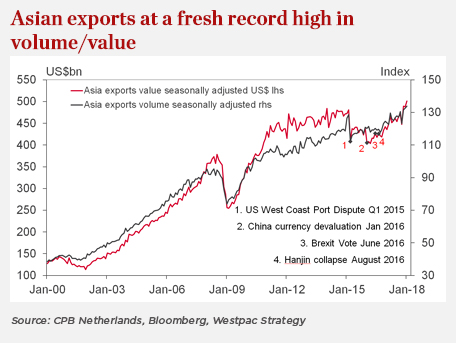 “Read any research piece in January or early February and it was about global synchronous growth and then look at the run of events since, including this outbreak of protectionism. We arguably hit the peak for global growth in Q4 last year, but now we’re seeing the recent run of geopolitical risk negatively impact on the near term outlook.

“So we’re entering this trade uncertainty with some of the strongest global growth in many years, but as we’ve seen before it can slow down pretty quickly.

“Clearly the rules based system isn’t working anymore because it’s easier for everyone to argue, ‘the US has done it, South Korea has done it, we’ll do it’. And that’s the root of my concern. There is a risk that at the end of the current consultative period between the US and China that additional steps are taken.”